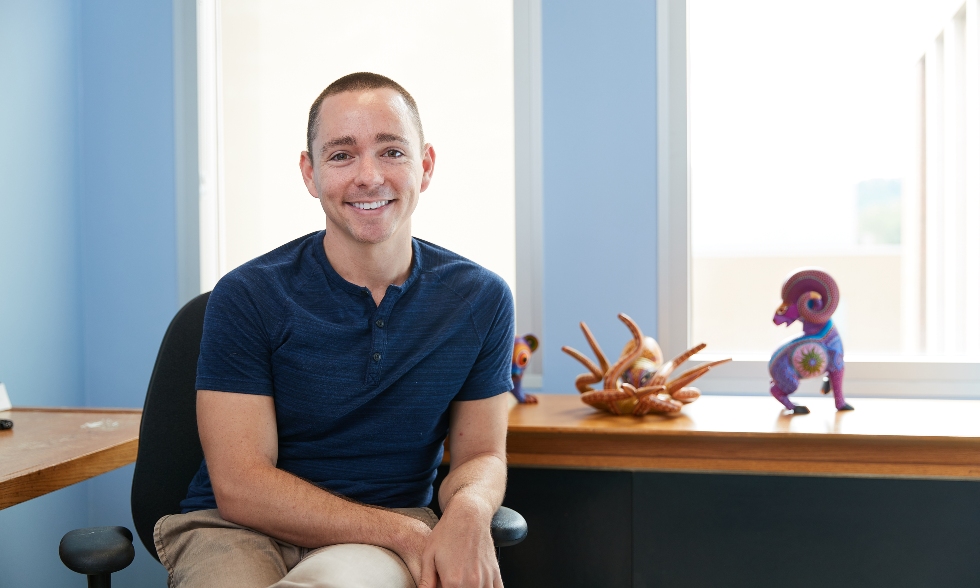 McMaster's Canada 150 Chair in Biological Dystopias, Jonathan Pruitt, has travelled the world studying animal societies to learn how their organizational traits can cause some societies to thrive while others struggle, or collapse.

What do African social spiders and humans have in common? According to McMaster researcher Jonathan Pruitt, more than you might think.

Pruitt is the Canada 150 Chair in Biological Dystopias and has travelled the world studying different animal societies – from wasps, to ants, to spiders– to learn how their collective behavioural traits can cause some of these societies to thrive, while others struggle or even collapse entirely.

Pruitt, who arrived at McMaster this fall from the University of California, Santa Barbara, talks about biological dystopias, the surprising shared characteristics of animals and humans, and about the research collaborations he hopes to build as a Canada 150 Chair:

A dystopia is a future environment where things have gone awry, or things aren’t working out, it may be the worst possible scenario.  So a biological dystopia is any living system that has entered an alternative state that’s at odds with the interests of the society itself.

I want to know why it is that so many animal societies and human societies historically have failed and what allows some societies, some of which could be described as dystopias, to bounce back from could-be failure, where we might have predicted they would be doomed for sure. So why do they bounce back? What allows a system to be resilient?

I create artificial societies of animals where I manipulate the societal traits that I think might be favourable, or disfavourable and subject them to challenges, both real and imagined, and see what it takes for societies to succeed.  I work with lots of different animals – fish, insects, lizards – and I’ve done a lot of work with African Social Spiders.

On how he studies animal societies:

First, I go out into the wild and I collect spiders. I drive down a road in Africa, or Madagascar, or sometimes in India, South America, until I see a giant spider web that engulfs the crown of a tree or is coming down over fencing. We collect these animals in huge numbers and bring them into the lab, then I study the interactions between individual variation and the collective attributes of the societies.

Then we engineer different experimental compositions made up of individual personality types and see what effects this has on the collective behaviour of the group and the performance or the group when we, say, starve them, or have them get attacked by ants, or we subject them to blazing heat. We cycle these stressors on and off to see how they fare in terms of reproductive output, survival, their relationships with each other, whether they maintain cooperation, or whether they descend into infighting.

On which kinds of animal societies fare better:

We find broadly, that diverse societies do better than other kinds of societies. Behaviourally, in diverse societies, individuals often take on different roles, so they end up competing with each other less in a group. Not only does this seem to reduce conflict, it’s like having a diverse investment portfolio – if you have a society with lots of different individuals, then you have an increased probability that under different conditions, at least some members of the group are going to be able to withstand any challenges, circumvent them and rescue other members of the group from could-be demise.

On why aggression in animal societies is both good and bad:

Aggressive societies tend to do well in low resource conditions, so if you’re in a society where you’re competing against other groups and resources are scarce, or there’s a lot of enemies that can infiltrate. Societies that are xenophobic, or aggressive towards prey, actually tend to do better. They keep infiltrators at low abundances, and aggressive groups capture the limited amounts of resources they can.

But the problem is, for these same societies that do well under those conditions, if you have higher resource conditions, then you don’t need to be so aggressive and it becomes a waste of time because these societies also suffer from a high incidence of infighting. So sure you can keep out parasites and acquire resources, but when you’re not actually stressed, you waste all this time and energy eating each other, and each other’s offspring – it can get pretty grisly!

On the parallels to human societies:

There are parallels between all sorts of life. I mean the way a human society works, the way human relationships work, or the social order that we think would be unique to humans – often there are really striking parallels to what transpires in the animal world.

We see this with traits like altruism in animal societies. In-group, out-group morality argues that individuals that you identify with, you tend to be nicer towards – you reserve your more tolerant behaviour, your patience, for these individuals. For individuals of the out-group, you reserve your most antagonistic behaviour. This is true of human societies too. So, we might think we’re pretty highfalutin, but at the end of the day, we’re doing a lot of the same things animals are doing.

On travelling the world, and research in Namibia:

There’s not been a 15 month stretch in the last four years, where I’ve not been on every continent except Antarctica. I like elements of each place, then again, I have complaints about each place. Thus far, Namibia has been a standout. It’s is one of the most scarcely populated areas in the world, and in the Namib Desert, you have these orange-red sand dunes – they’re huge, they’re the tallest sand dunes in the world. We climb up them looking for spiders in these tiny bushes that occur on every couple of sand dunes, it’s an excruciating amount of cardio vascular exercise!

It’s one of the starkest landscapes in the world, yet life teems there. There are little lizards and invertebrates, sometimes snakes and eagles. And then at night, the stars are amazing! It makes you feel so small, and there’s something very special about that.

What he likes best about being in the lab:

Brainstorming on a whiteboard, planning, scheming. I’m a schemer! So I have white boards everywhere. I’m entrepreneurial – I like taking an idea and just ruminating on it with my students to ask the most exciting research question that we can. Saying, “Here are our resources, this is what we can do, these are the animals we have – what’s an idea that people aren’t yet thinking about?”

I like those social moments of collaboration and being inspired together, whether it’s in the field with each other, or in the lab. Those are the magical moments for me. I like taking half an idea, a glimmer of an idea, and realizing together there’s something to this – everyone gets a sense of ownership.

On collaborating as Canada 150 Chair:

The goal of this chair is take the data from my experiments and make predictions for other kinds of systems on which we can’t do experiments – like imperiled wildlife or harvest populations, like salmon, where the attributes about the systems prevent use from manipulating them directly. So I hope to leverage the intellectual capital of Canada. So many scientists have these massive legacy datasets on interesting populations. I want to see if the predictions from our experiments bear out in the real world.

This tipping point thing is something I have data on and I’ve been working on for a while, but this chair allows me to scale it up, bring attention to the topic, and to generate a collaborative research initiative  – which wouldn’t have been possible otherwise – to pose and answer the greatest and most important questions we can think of. So if anyone wants to collaborate, fire me an email!!