Analysis: How the puzzle of viral vector vaccines was solved, leading to today’s COVID-19 shots 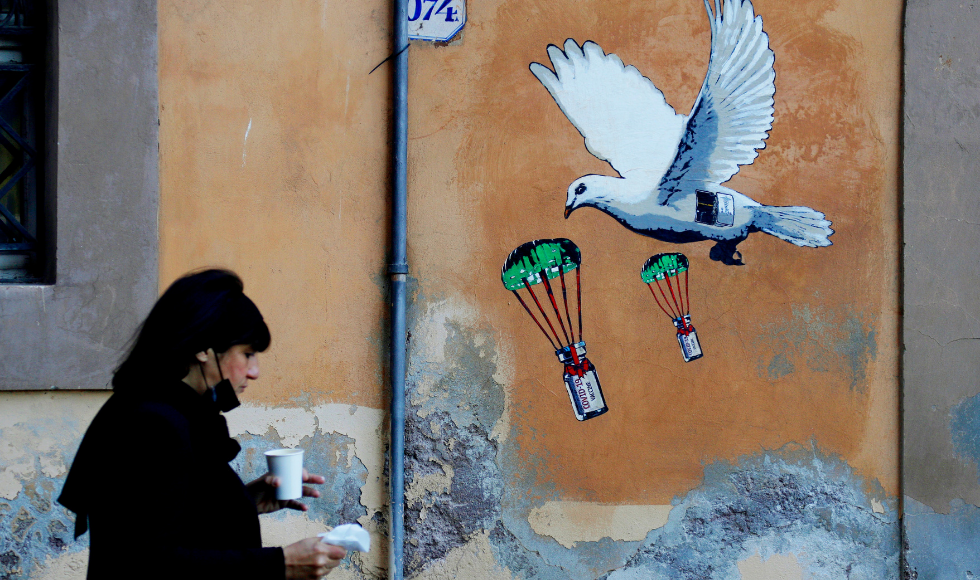 A mural in Rome depicts a white dove parachuting vials of COVID-19 vaccine. Several COVID-19 vaccines are based on a viral vector developed by Canadian Frank Graham decades ago. (AP Photo/Gregorio Borgia)

How would you go about solving a puzzle if you didn’t know what pieces to use, how many you would need, how it was supposed to look when you were done or what possible function it would serve?

Such a challenge faced Frank Graham in 1969 when he was a Canadian post-doctoral researcher in the lab of molecular biologist Alex Van der Eb in the Netherlands, working with human adenovirus 5 (Ad5). When he returned to Canada in 1973, he continued his work on Ad5 in the Cancer Research Group in the biology and pathology departments at McMaster University.

The enduring technology he developed would go on to serve humanity in many ways. Some of them are still emerging today, but one stands out above the rest: Graham’s Ad5 vector would serve as a world-wide platform for vaccines for COVID-19, including the AstraZeneca and Johnson & Johnson vaccines approved in Canada.

The puzzle Graham solved was making a valuable viral vector: a microscopic Trojan horse that can be easily assembled, cheaply manufactured in bulk and remains stable at regular refrigerator temperatures. Most importantly, it is efficient at transferring foreign DNA into mammalian cells — including human cells.

Viral vectors are modified viruses that can trigger the body to generate protective responses without causing infections. These virus-like entities, which are usually rendered incapable of replicating, can achieve what natural, intact viruses can, but without the infectious destruction. They can enter human cells and instruct the machinery of those cells to express the genes carried by the vector, causing the cell to make and export the proteins encoded by those genes — all without permanently modifying the host cell. 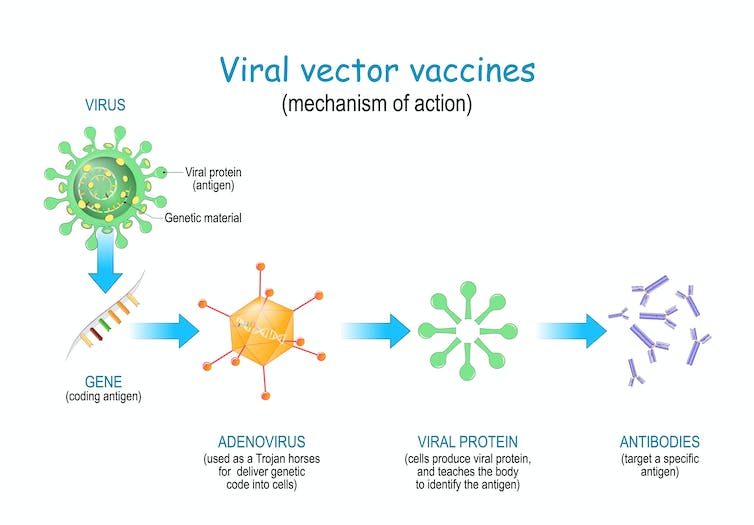 Viral vector vaccines vaccine use a safe virus to insert pathogen genes in the cell to produce an immune response. (Shutterstock)

That means that once a viral vector vaccine for COVID-19 is administered, it can express the COVID-19 spike protein that is engineered into the vector’s genome. This allows the affected cells to present the COVID-19 protein antigen to the human immune system and stimulate immune defences against a COVID-19 infection.

Several recognized, non-replicating viral vectors have been developed for vaccines. These include those based on adenovirus, adeno-associated virus, herpes virus (such as cytomegalovirus) and vaccinia virus, along with retrovirus-based vectors, including Moloney murine leukemia virus and others based on modified lentivirus (HIV). All have been used in clinical trials of both gene therapy and vaccine delivery with varied success.

However, for effective wide-scale use as safe vaccines, viral vectors based on adenovirus (infamous for causing the common cold) or vaccinia virus are preferred. In the COVID-19 vaccine arena, the ones that stand out most are based on adenovirus vectors. This is where Graham’s discoveries come into play.

As the first piece of the puzzle, Graham developed a method to transfer foreign DNA (in this case pieces of the genome of human adenovirus subtype 5) into a cell.

The article describing this technique has been cited by more than 10,000 investigators since it was published, making it one of modern science’s greatest hits.

Because viral vectors are usually non-replicating, expansion (replication) of the vector for manufacture and vaccine production presented a challenge. Vectors need living cells to host them and do the vectors’ bidding, allowing them to reproduce. What was needed was a self-perpetuating line of cells implanted with a modifiable virus, or vector.

This was solved by Graham’s second approach. At McMaster University, he used his DNA transfer technique to establish a stable, easy to grow and readily manipulated human cell line called HEK293 cells, which permanently contained the genes required to allow a replication-deficient vector to grow. Graham’s article on this cell line is another classic, with more than 6,000 citations.

The HEK293 cell line and its derivatives are now used around the world, in industry and both university and government research laboratories, to manufacture vaccines and many other biologics.

As a third approach, Graham prepared stable and robust molecular biology tools to allow easy creation of stable adenovirus vectors with foreign gene insertions that could accommodate up to 8,000 base pairs (individual units of genetic code) of foreign genetic information — which is enough data to produce most useful proteins. This is used both for gene transfer and expression (in gene therapy) and for vaccine delivery, as we have seen with the COVID-19 vaccines.

For vaccines, the process made it possible to take a virus that causes cold symptoms, remove the genes that enable it to reproduce and replace them with genes from an infectious agent, such as a different virus, that is a vaccine’s ultimate target. Those added genes trigger the production of a harmless element of the target virus. The body then recognizes and attacks this element, generating immunity. In the case of the COVID-19 virus, this element is the protein spike.

Putting the puzzle together

Graham, now retired and living in Italy, certainly knew how to put a puzzle together. Today, half a century after his first successes in building viral vectors, billions of people around the world have him to thank for protecting them from the pandemic virus.

Jack Gauldie, Distinguished University Professor, Department of Pathology and Molecular Medicine, McMaster University. This article is republished from The Conversation under a Creative Commons license. Read the original article.