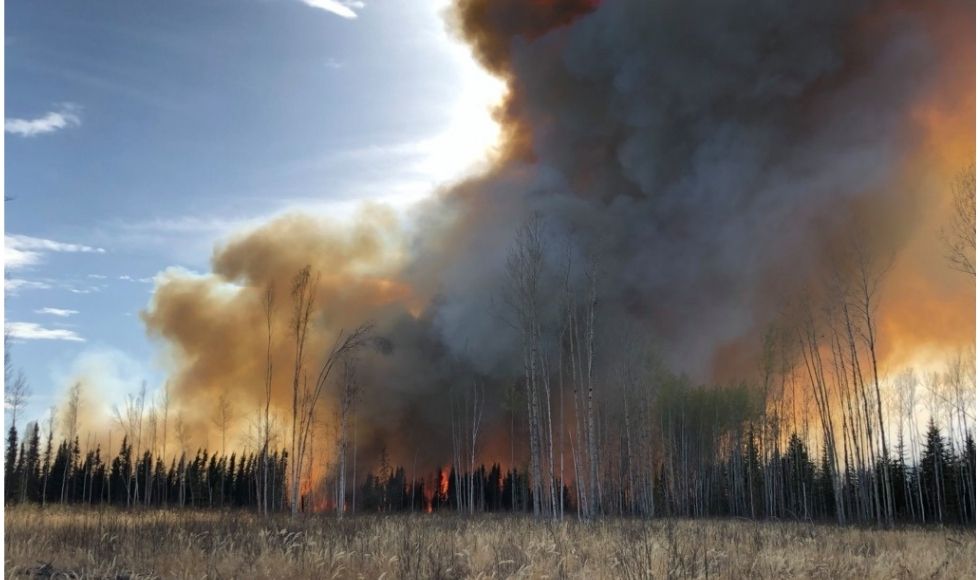 An experimental peatland fire burning in Alberta. Once viewed as benign wetland firebreaks, peatlands are complex ecosystems that aren't necessarily resistant to fire and can extend and accelerate wildfires. (Photo by Sophie Wilkinson)

Five years after the disastrous wildfire in Fort McMurray, Alta., researchers are warning that the complex role of peatlands, a factor critical to projecting the risk and behaviour of future fires, is missing from the forecasting model.

The Fort McMurray fire burned out of control from May 1 to July 5, 2016, though it continued to smoulder until it was finally declared extinguished Aug. 2, 2017.

Peat deposits – which are prevalent across Canada, especially in Alberta – are complex threats that can complicate and magnify the risk of severe, long-lasting fires and heavy smoke, but they are not yet part of the standard assessment tools that fire managers use.

It’s a critical gap that should be addressed urgently, say the authors of a new paper published today in the International Journal of Wildland Fire, who have completed the first scientific assessment of peatland smouldering fire potential.

“Our understanding of this risk is advancing quickly because it needs to. Year on year, wildfires are becoming more severe and having greater impact,” says researcher Sophie Wilkinson, lead author of the paper.

“We need tools to understand this at every level of management and governance.”

Wilkinson, a postdoctoral research fellow in the School of Earth, Environment and Society, authored the paper with professor James Michael Waddington and Alex Furukawa from McMaster, and professor Mike Wotton of the University of Toronto.

The team looked most closely at peat deposits that are home to black spruce trees. The trees can burn quickly, throwing flaming embers into the air and across the landscape, while the peat, once lit, can smoulder for months and even move underground before re-emerging.

The compacted layers of dead Sphagnum moss and other vegetation, steeped in groundwater and topped by living moss and sometimes black spruce, are huge vaults of carbon.

Once viewed as benign wetland firebreaks, these complex ecosystems are not necessarily resistant to fire and can extend and accelerate wildfires. When climate change and human activity accelerate the drying of such wetlands, stored peat becomes even more dangerous fuel for smoky, stubborn and potentially devastating fires.

“I think the Fort McMurray fire really highlighted the lack of understanding of ecosystems in that area and the interplay between them,” Wilkinson says.

“It’s concerning from a public health and safety perspective, and in terms of its feedback with climate change.”

The researchers were able to perform a detailed study in Alberta because peatlands there are more thoroughly mapped, but they believe similar risks exist throughout the boreal peatlands of Canada.

The risk of peat fire is shaped by the type and depth of a peat deposit, the geological structure beneath it, and the presence of trees on its surface, all influenced by rain, wind and temperature – collectively known as “fire weather”.

Sometimes fire moves swiftly over peatlands, while other times it digs in. Often, the researchers find, the potential for the worst peat fires is in the smallest, shallowest deposits, which are common in the more populated southern areas of the Boreal Plains.

“It’s challenging because there are so many counterintuitive elements at play. These are wetlands that are burning,” Wilkinson says.

“A good understanding of how fire is likely to behave in relation to these variables is not yet available to fire managers. I think awareness is growing, and peat fires are getting onto the radar of the public and policymakers more, but the actual scale of the carbon stored in peatlands and the potential to release it through fire is not well understood by the public.”