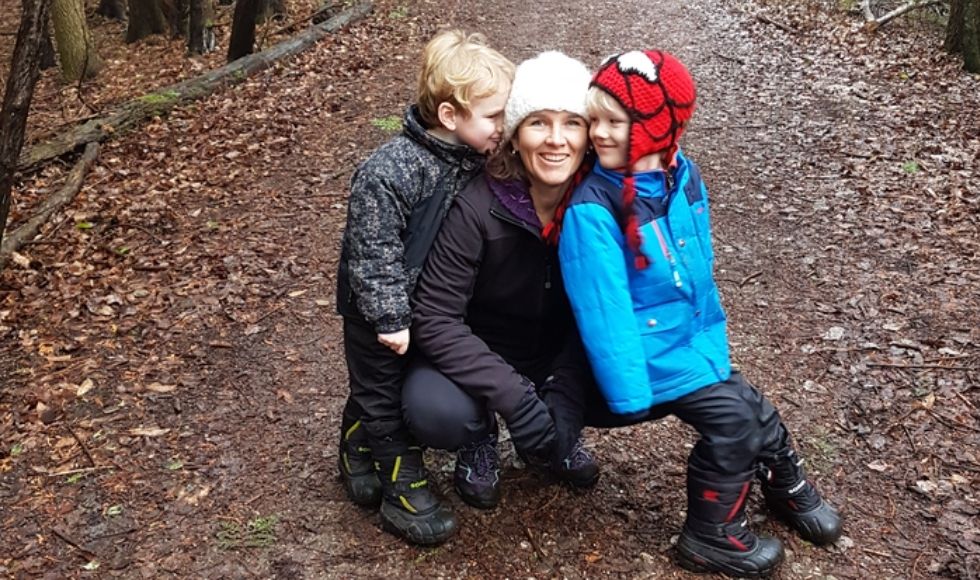 Cindy Lee Graham, seen here with her twin sons Dean and Darwin, died in February 2021 of glioblastoma, but her legacy could save many other lives. She donated her brain and spinal cord to McMaster researcher Sheila Singh's lab in hope of helping find a cure for this aggressive, deadly cancer. (Photo courtesy of the Graham family)

Thomas Graham will always remember his wife Cindy as someone with the most beautiful and infectious smile.

But he wants the world to remember her as someone who, as she faced death herself, still sought to help others through her tissue donations to science, including her brain tumour tissue, blood, and immune cells and, ultimately, the remainder of herself.

Her goal was to offer others hope in the face of a deadly brain cancer.

And it is scientists at McMaster University and the new McMaster Cancer Centre whom Graham is trusting to keep alive his wife’s legacy – and preserve the love they shared.

If he had the chance to talk to her now, even briefly, he knows what he would say.

“I would also try to convey to her — she was incredibly modest — just how big of an impact she has had on this world.

“Her impact perhaps only truly came to light when she was taken from us, and the enormity of the void was realized.”

A rare insight into a lethal cancer

The cancer that claimed the Guelph resident’s life was a recurrent glioblastoma (GBM). The former science-based administrator died Feb. 24 this year, 21 months after being diagnosed. Most patients survive only 15 months after diagnosis; GBM currently represents a near-certain death sentence.

For McMaster scientist Sheila Singh, Cindy’s cancer-ravaged brain is worth its weight in scientific gold, even as she feels haunted by her inability to save her.

Singh and her team received Cindy’s final donation from McMaster’s anatomy department within three hours of her death in Guelph. They worked fast to fulfil their patient’s final wish, as preserving Cindy’s stem cells quickly was of the utmost importance.

“We work with harvesting live stem cells from brain tumour tissue, putting them into cultures to grow and ‘passage’ them into a renewable cell resource, called a cell line,” said Singh, a professor of surgery at McMaster, the Canada Research Chair in Human Cancer Stem Cell Biology and a pediatric neurosurgeon for Hamilton Health Sciences.

“Stem cells may only remain viable for up to 24 hours after death, and the sooner we are able to harvest them, the more viable the cells will be.”

“The cure did not come soon enough for Cindy, but it is coming, and it will be dedicated to people like our patients, like Cindy. This is part of Cindy’s true legacy and I know her husband and children are very proud.”

Singh’s team extracted the brain tumour stem cells and put them into cultures to grow in incubators. They also preserved tiny blocks of each tissue specimen in liquid nitrogen for later sequencing and other lab studies. They catalogued and cultured all the tissues for many hours that day and night, finally going home at midnight.

“It is amazing that all 10 samples passaged into 10 lines, we rarely get a 100 per cent hit rate for cell line development, unless the original cells were of extremely high viability,” said Singh.

Cindy’s donation of her entire organ system will allow Singh and her team to map out in detail the GBM and the mechanisms behind it, building a comprehensive profile of a biological serial killer. Previous donations have typically only been small GBM tissue samples.

A recurring GBM is different from the original cancer — it spreads aggressively, does not respond to treatment and is nearly always fatal. The tumour typically regrows from cancer stem cells that cannot be fully destroyed by traditional surgery, chemotherapy, nor radiotherapy.

On average, GBM tumours regrow seven to nine months after initial diagnosis. The five-year survival rate for GBMs is only 5.5 to 6.8 per cent, according to figures released recently by Brain Cancer Canada.

“When it came time to realize Cindy was not going to recover, I and my students were devastated,” Singh says.

“We study this disease every day, trying to find a cure and it’s a real blow to the whole research team every time we hear a patient is not going to survive.”

However, the organ gift will allow Singh to conduct research using CRISPR technology to map cancer cells’ genetic makeup, and that may mean GBMs are no longer a death sentence. Once identified, specific antibodies or immunotherapy can be deployed against GBM cells and halt their regrowth.

Cindy’s death also represents a new beginning of sorts for Bruce Wainman, professor and director of McMaster’s anatomy education program. He handled the donation and helped liaise with her family in making her last wish come true.

In doing so, this final gift breathed new life into McMaster’s anatomy lab shuttered by the impact of COVID-19 and the restrictions of remote work. Despite those limitations, Wainman’s team was prepared for Cindy’s donation and quickly swung into action.

Before her death, the anatomy lab staff were on call 24-7 to take the samples. At the same time, the scientists worked under the strict rules of Ontario’s Anatomy Act, governing the ethical treatment of the deceased’s family and the providing of a useful service.

In more normal times, donation arrangements are worked out in advance with a patient’s family and the lab coordinates with the hospital.

“Because Cindy became a body- and tissue-donor she lives on in a real way, with the minds of the students she helps educate and the research she carries on,” said Wainman, professor of pathology and molecular medicine.

“She knew it could possibly help other people, be it family, students, or complete strangers.”

Cindy has also taught Wainman’s students something deeper: The importance of altruism, helping others even as she knew she could not reap any benefit, he said.

“She did something meaningful and that’s something we can all aspire to. It came at such a time when everyone was casting around to find meaning in their work. We like to think we can facilitate the last and best thing that people can do with their lives.”

The meaning behind Cindy’s donation is something that resonates deeply with Singh, whose team forged a friendship of sorts with their patient during her treatment.

Her patient bonded with graduate students and happily offered to donate her brain tumour tissues, being a scientist herself who understood the value of research. During her illness, she also enrolled for another study to harvest blood for t-cell immunotherapy research.

“If Cindy were here today, I would want to be having a huge party to celebrate the success of her survival and that people like her enable the cure,” said Singh.

“I would also want to tell her that there is hope, that we are launching a new McMaster Cancer Research Centre which will host research directly derived from her gift. It will be a force that helps to ultimately defeat this disease and other treatment-resistant cancers of high unmet need.”

In memory of Cindy, her family has established the Cindy Lee Graham (nee Martyn) Memorial Award for Brain and CNS Cancer Research.

The award will provide funding in perpetuity to attract the best graduate student researchers to McMaster’s new Cancer Research Centre.

As Graham grapples with his loss, he wants their eight-year-old twin boys, Dean and Darwin, to not only remember their mother, but understand the lesson behind her final gift.

“I’m proud. I was always proud of Cindy; she was the better part of me. This is what she would want, to make people’s lives better,” Graham says.

“Our kids can have a real and tangible connection to that and feel proud about their mom. They often tell me, ‘So Mommy is a hero,’ to which I respond, ‘She most certainly is.’ ”