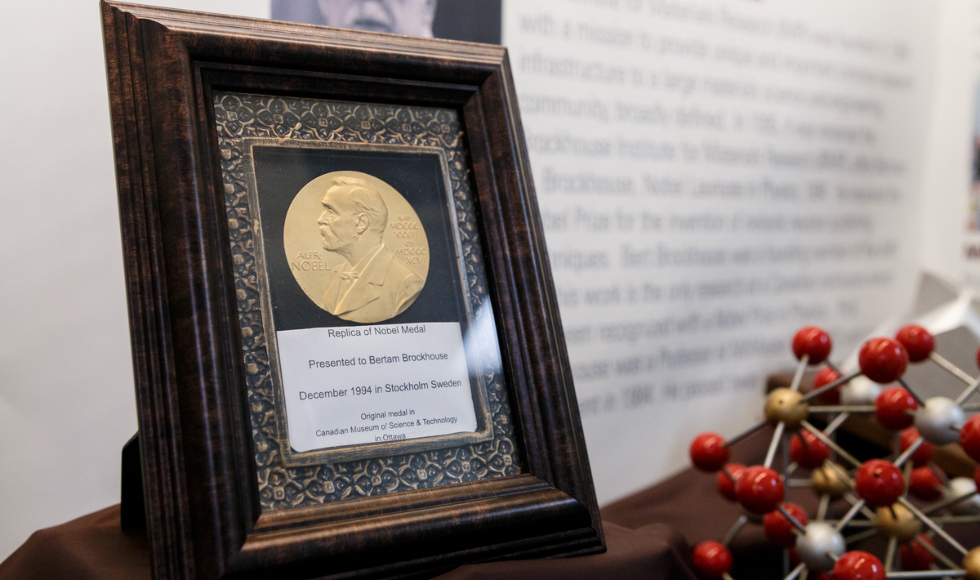 A replica of Bertram Brockhouse's Nobel Prize medal, provided by his children. Photo by Sarah Janes.

Twenty-five years after professor Bertram Brockhouse won the Nobel Prize in physics, his legacy lives on at Mac.

And not just because his name is still on his office door, almost 16 years after his death.

Initially working at Chalk River Laboratories in Deep River, Ont., Brockhouse became a pioneer of neutron scattering, a technique for studying atomic and molecular motion that yielded information about materials that had not previously been possible to collect.

“The traditional method of seeing materials at the atomic level had been to use X-rays,” explains Tom Timusk, a professor emeritus in McMaster’s department of physics and astronomy and Brockhouse’s officemate. (His name is still on the office door, too.)

“The problem was that certain atoms, like hydrogen, cannot be seen by X-rays – not even the basic structure.”

Brockhouse’s technique and the triple-axis spectrometer he developed are now “the most powerful technique we have for seeing inside materials,” says Graeme Luke, chair of the department. “It’s used in everything from pure physics, chemistry and biology to engineering, where it allows you to look at stresses inside things that are moving – like a jet engine when it’s running.”

His work in neutron scattering won Brockhouse the Nobel Prize in 1994, 10 years after he retired from McMaster. He shared the award with American physicist Clifford Shull, who also worked in the field.

“As the Nobel committee said, they gave out two prizes for two people – one of them [Shull] told you where the atoms were in the crystal, and the other [Brockhouse] told you how they moved,” Timusk says.

But Brockhouse’s legacy, especially at McMaster, extended beyond establishing a brand-new field of physics. The PhDs he trained here – about a dozen of them – went on to use and extend the technique throughout the world, shaping illustrious careers. (One former student, Chen Sow-Hsin, got an honorary doctorate from Mac in 2016.)

Luke points out that McMaster remains a world leader in neutron scattering because of Brockhouse, with world leaders in the field, including Bruce Gaulin, the current Brockhouse Chair in Physics of Materials, working and teaching here.

“Canada’s leadership in neutrons follows from Bert, and it’s still centred at McMaster.”