A triple threat against an aggressive breast cancer 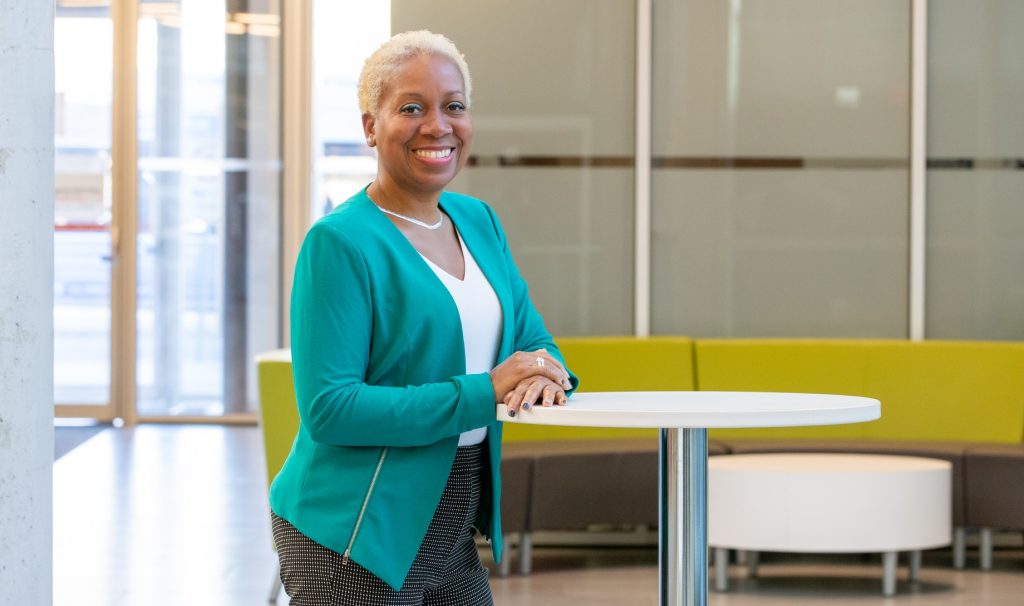 Biologist Juliet Daniel is studying an aggressive cancer that affects Black and Hispanic women, and she’s an outspoken advocate for more diverse research on matters that affect women of colour. (Photo by Georgia Kirkos, McMaster University)

“We’re trying to understand the racial disparities in triple negative breast cancer in general, and in Black women in particular, to figure out what’s contributing to those disparities.”

Researchers know TNBC is difficult to detect and extremely hard treat, but there is still relatively little data on it, perhaps because many of the countries and regions where it is more prevalent lack the research infrastructure to study it.

Between that and the stigma surrounding cancer in some communities, women who are most at risk of TNBC are often left with little to no information or support.

In the lab, in the community and in several countries , molecular cell biologist Juliet Daniel is working on solutions to all three of these problems.

“Our responsibility as researchers really is — and really should be — to make the world a better and brighter place,” she says.

The research | Kaiso and community outreach

Scientists originally believed the high incidence of TNBC in Black women was related to socio-economic factors, but increasing evidence suggest there are other factors at play, Daniel says.

Daniel discovered a gene that encodes a protein named Kaiso, which has a very high expression in TNBC tumours. As a result,  Daniel’s research team is studying the correlation between high Kaiso expression and TNBC aggressiveness to better understand the racial disparity in TNBC.

“We now believe that there is an ancestral genetic link, or predisposition to TNBC, in women of African ancestry,” she says.

There’s also the question of who decides which research gets funded at a time when resources are tight.

When Daniel first applied for a grant to study a possible genetic link between Kaiso and TNBC, one reviewer commented that her proposal to study TNBC in women of African ancestry “was not relevant to the Canadian context.”

“Thankfully, I am a very determined person, so I kept improving my application, and on the third try, I was successful,” she says, “but the reviewer’s comment was very disheartening to me and my trainees, who come from very diverse backgrounds.”

Studies show that in the U.S., where they collect race-based data, research conducted by visible minority researchers and focused on visible minority populations is among the least-funded, Daniel notes. “Many of us would posit that this likely also applies here in Canada.”

In addition to her research, Daniel works with community organizations to raise awareness and education about this deadly cancer — especially for women who don’t have access to support and options.

“Our goal is to get people to talk about it, get women to go and get screening, and encourage women to be proactive about their breast health.”

The impact | A robust research ecosystem

By identifying unique DNA mutations or markers, Daniel and her team are exploring potential ways to use Kaiso in screening, or as a tool in a diagnostic, prognostic or therapeutic capacity.

“Or we could even target Kaiso and prevent or inhibit its action in aggressive tumours, and perhaps then prevent the tumours from spreading to other organs, such as the lungs, liver or the brain.”

For several years, Daniel has teamed up with a community activist, Leila Springer, pairing her own research strength with engaging programming to help inform women of African ancestry about TBNC and the risks it poses through educational and fundraising initiatives.

Daniel is also building research capacity worldwide by collecting and analyzing breast tumor tissues and data from areas where TNBC is common, but hasn’t been studied — Nigeria, Barbados, Jamaica and elsewhere in the Caribbean — as well as creating opportunities for early-career researchers and graduate students of diverse ethnicities who are highly attracted to health disparities research.

Daniel, who recently helped create a network of Black scientists in Canada, is also an outspoken advocate for women in science technology, engineering and mathematics (STEM), and for supporting research in regions with emerging scientific infrastructure.

“A key to women’s health and more equitable health care is to open the door for researchers from diverse backgrounds and experiences,” she says.

Too often, research priorities have been shaped by the dominant culture, and health issues that affect people of colour, especially women, have been sidelined.

Daniel says she has always encouraged women in her programs to pursue careers in research and academia, despite some of the hardships they might encounter as women. “Some of my former trainees have remained in academia, but many have seen the challenges I faced as a young Black female scientist in academia and opted for alternate careers.”

But after seeing a huge shift in awareness of anti-Black racism and other inequities in 2020, she feels a change coming. “Many of my trainees are hopeful that the future is bright, that they can succeed at anything they do, and that their gender or ethnicity will not have an impact on their dreams or aspirations.”