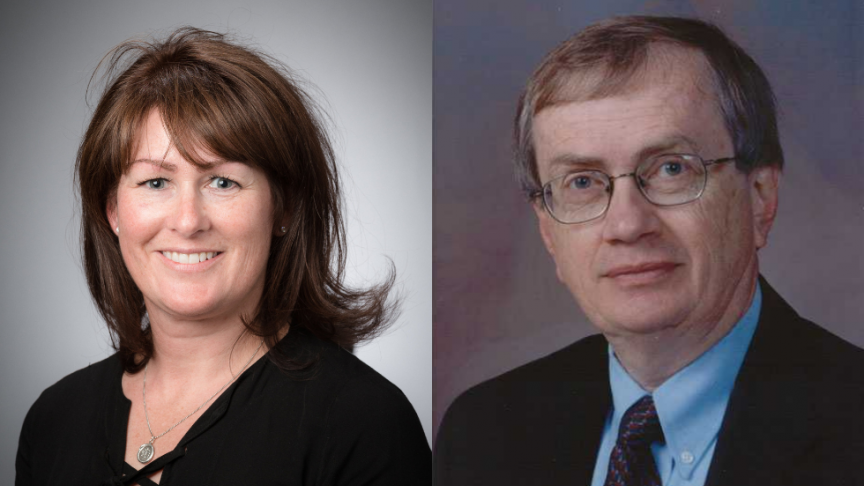 A project by Academics Without Borders is supporting engineering researchers at two Ugandan universities with mentorship from international experts, including McMaster engineering professors Sarah Dickson-Anderson (left) and Thomas Marlin (right).

BY Kim Arnott, Faculty of Engineering

Initiating a successful research project is never easy. For inexperienced faculty working in a low-income country, the challenges are even greater.

A project by Academics Without Borders (AWB) is supporting engineering researchers at two Ugandan universities with mentorship from international experts, including McMaster engineering professors Sarah Dickson-Anderson and Thomas Marlin.

“We all empathize with the challenges faced by inexperienced faculty when initiating a research career and would like to help the next generation,” explains Marlin, professor emeritus in the department of chemical engineering.

He notes that limited funding and institutional support add to the difficulties for new researchers in places like Uganda.

“These faculty deserve as much assistance as possible from the developing world. AWB provides the bridge between the deserving new faculty and the willing volunteers,” he adds.

The AWB initiative to strengthen engineering education and research at Mbarara University of Science and Technology in Uganda began last January.

In the first phase of the program, experts from Canada, Australia, Nigeria, the United States and Uganda delivered a series of instructional workshops on research topics.

David Wilkinson, a Distinguished University Professor in McMaster’s department of materials science and engineering, worked with Marlin and other participants to develop the 10-week curriculum for the online program.

The second phase of the program saw the Ugandan researchers teamed up with mentors to develop research proposals. Seven projects have been selected by AWB for funding over the next year.

Dickson-Anderson, a professor in the department of civil engineering, is mentoring a research project seeking to develop light-weight hollow concrete blocks from plastic waste for use in construction.

Marlin is mentoring two projects. The first seeks to improve the reliability of oxygen supply to hospital patients by adding a storage capability to an oxygen generator. The second addresses professional skills in engineering education by developing a short course to prepare students just prior to an industrial internship.

“Mentors provide advice throughout the project from initial concept, through refinements, proposal preparation and project execution. The role is less of a supervisor and more of a supporter who has struggled with research and can provide guidance on how to avoid pitfalls and maximize the potential of the participants.”

An Ethiopian university will be next to offer the AWB program, but Wilkinson says the potential demand is huge if enough volunteers can be found.

“There are hundreds of universities that would be in the position to be good receptors for this kind of training,” he says.

“AWB is looking for people who want to get involved, either teaching the courses or mentoring the research projects, so they can expand it into different universities in different parts of the world.”

While the effort required of volunteers is modest, the impact of the work can be significant, says Wilkinson.

And some of those benefits accrue to the volunteer, adds Dickson-Anderson.