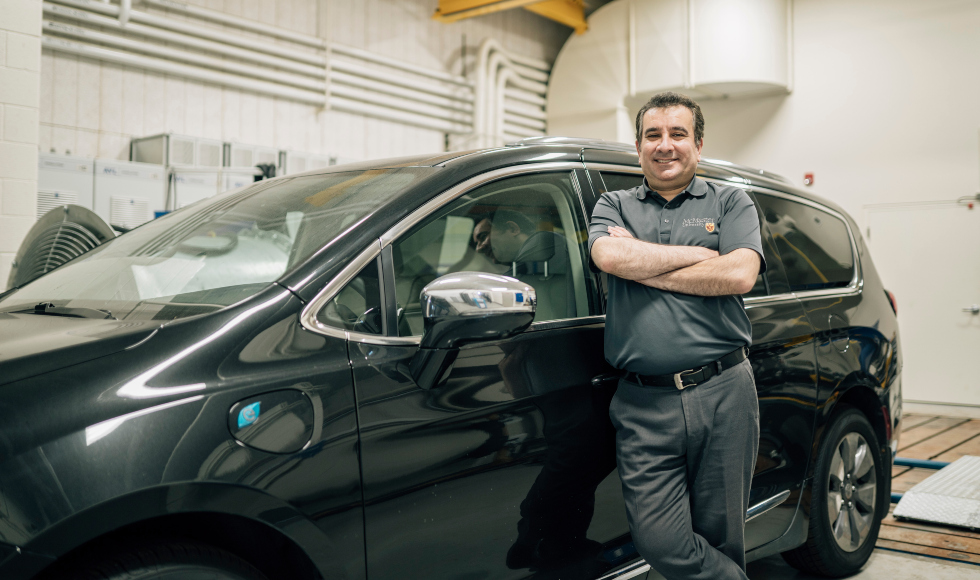 What does the electrified vehicle of the future look like – and how can it be made as environmentally conscious and energy efficient as possible?

A cutting-edge partnership between Ali Emadi and his research group at the McMaster Automotive Resource Centre (MARC) and Fiat Chrysler Automobiles (FCA) continues to push electric and hybrid vehicles to new heights in Canada.

Today, Emadi accepts the Natural Sciences and Engineering Research Council of Canada (NSERC) Synergy Award for Innovation on behalf of MARC for McMaster’s ongoing collaboration with FCA to develop the next generation of electric and hybrid vehicles.

The award, which was launched in 1995, recognizes partnerships between universities and Canadian industry in natural sciences and engineering research and development.

“Our collaboration with FCA is driven by a commitment to make electrified vehicles more efficient and cost-effective to decrease harmful emissions, protect automotive manufacturing jobs in North America and advance technological innovations in the field,” says Emadi, Canada Research Chair in Transportation Electrification and Smart Mobility (Tier I) and a professor in Electrical & Computer Engineering and Mechanical Engineering, McMaster University. He is also the NSERC/FCA Industrial Research Chair in Electrified Powertrains.

“FCA has helped us tremendously as we built one of the finest research and development programs in the world in transportation electrification at MARC to develop the electrified vehicles of the future,” he adds.

Emadi’s collaboration with FCA began more than 15 years ago when he led the Electric Power and Power Electronics Centre and Grainger Laboratories at the Illinois Institute of Technology.

In 2011, he joined McMaster University as the Canada Excellence Research Chair in Hybrid Powertrain, where MARC’s partnership with FCA has since flourished.

“Back then, while McMaster had one of the best programs in academia in North America in automotive systems, there was an opportunity in automotive electrification – and this is exactly my research area,” Emadi says.

“We set our goal to develop one of the world’s best university programs in the field of transportation electrification from the ground up. We started working with FCA from day one.”

At MARC, Emadi leads a robust research group with more than 250 graduate and undergraduate students, post-doctoral research fellows and engineers. His team of students are active contributors to industry projects, making his lab one of the most prominent training environments in the world for new talent in automotive engineering.

“Ali Emadi and Fiat Chrysler Automobiles are building on a foundation reinforced by the strengths of their shared human capital and research innovation. Their partnership is an asset to automotive research, and has certainly demonstrated outstanding collaboration and significant results,” says Karen Mossman, McMaster University’s vice-president, Research.

“The NSERC Synergy Award is a worthy recognition of their outstanding industry-university alliance.”

The team collaborates with more than 40 engineers at FCA to test new technologies in the lab, such as electric propulsion motors, power electronic converters and hybrid energy storage systems.

“Our partnership with Professor Emadi and the McMaster Automotive Resource Centre has been especially rewarding in that we are not only developing future vehicle technologies, we’re also developing future skilled workers in Canada,” says Tony Mancina, Head of Engineering, FCA Canada, in a news release.

Much of the transformative technologies developed through the partnership can be found under the hood of the 2018 Chrysler Pacifica Hybrid – Canada’s first and only hybrid minivan.

“Our story is an example of how effective NSERC has been in empowering partnerships between academia and the private sector,” says Emadi.

“Thank you to FCA for their support, even during this trying time of COVID-19, and to NSERC for valuing applied research and supporting industry partnerships.”

The Synergy Awards for Innovation were launched in 1995 by NSERC to recognize innovative partnerships in natural science and engineering research and development (R&D) between universities and Canadian industry.

McMaster and FCA’s project, “Electrified Vehicles: The Car of the Future,” won an NSERC Synergy Award for Innovation in the “large company” category, which is given to a university partnering with a single company with 500 or more employees. As the recipient of the NSERC Synergy Award, Emadi receives $200,000 NSERC research grant and FCA receives $30,000 voucher valid toward the cash portion of their required contribution for a new NSERC Alliance grant, which encourages university researchers to collaborate with partner organizations in the private, public or not-for-profit sectors.

Mice pups living on mountain tops reserve their energy for growth rather than warmth. When they get too cold, they conserve energy by slowing down their metabolic processes.