Allergic to peanuts? You’re better to avoid them 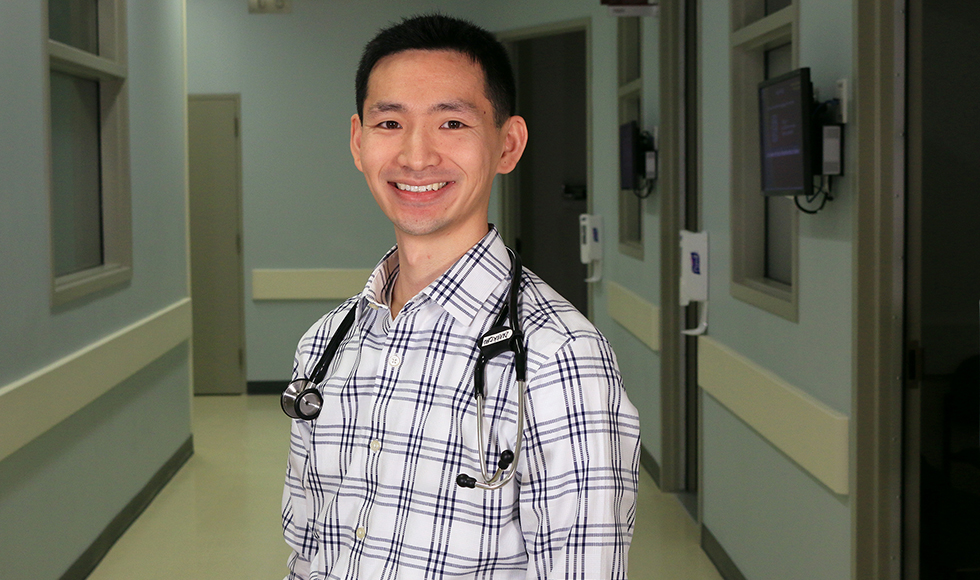 Derek Chu is a fellow in clinical immunology and allergy at McMaster University. Photo by Tina Depko.

If you have a peanut allergy, avoiding them is safer than current therapies that desensitize people through gradual exposure by eating peanuts, according to research led by McMaster.

The researchers conducted a systematic review and meta-analysis of 12 existing studies of the current desensitization treatment called oral immunotherapy (OIT) in which more than 1,000 patients with peanut allergy were followed for up to almost six years.

The results showed those using peanut oral immunotherapy suffered more side effects, including anaphylaxis and rescue epinephrine injections, than those who stayed away from peanut products altogether.

The study was published in The Lancet.

“Millions of people around the world have a peanut allergy and there’s growing awareness of its negative effects, from health-related quality of life to a reaction that could result in death,” said Derek Chu, a fellow in clinical immunology and allergy at McMaster.

“When you look at the data, it is clear that people who were on peanut oral immunotherapy, known as OIT, had many more allergic reactions compared to those that only avoided peanut, both mild ones such as vomiting all the way to severe reactions like anaphylaxis. This was despite oral immunotherapy being able to cause desensitization.

“Looking at all the studies, we consistently found that the protection from oral immunotherapy was incomplete and variable, with people being able to eat peanut in the clinic, but, in the real-world they ended up having reactions. This was probably because the way people eat in the real world is different than how they eat in a clinic setting. In many instances there was no known reason for a loss of protection and patients had unpredictable reactions.

Chu and an international team of researchers set out to find and analyze existing data on oral immunotherapy targeting peanut allergy to clarify its potential benefits and harms.

Their analysis showed high quality evidence that, compared to allergen avoidance, current oral immunotherapy regimens can achieve desensitisation after about a year of daily treatment but that, paradoxically, this resulted in a large increase in anaphylaxis and other allergic reactions, rather than preventing them as intended.

Susan Waserman, an author on the paper, is a professor of the Department of Medicine at McMaster, an allergist and immunologist for Hamilton Health Sciences and director of the adverse reactions clinic at St. Joseph’s Healthcare Hamilton.

She said: “While oral immunotherapy to peanut will be a beneficial treatment for some of our patients, this approach comes with a risk of reactions, and many patients may opt for avoidance. Peanut allergic individuals need choice and accurate information, which should include this study reported in the Lancet.”

“We found more research is needed to find interventions that allow people living with a peanut allergy, in particular children, to be safe,” said Holger Schünemann, an author of the study and professor and chair of the Department of Health Research Methods, Evidence and Impact at McMaster.

“Patients, clinicians, policy makers and researchers will find the interactive Summary of Findings table from the research that is available here: http://bit.ly/LancetOIT to be helpful with understanding the information.”

Chu noted oral immunotherapy for peanut allergy is an experimental therapy that is being considered by the United States Food and Drug Administration (FDA) and the European Medicines Agency.