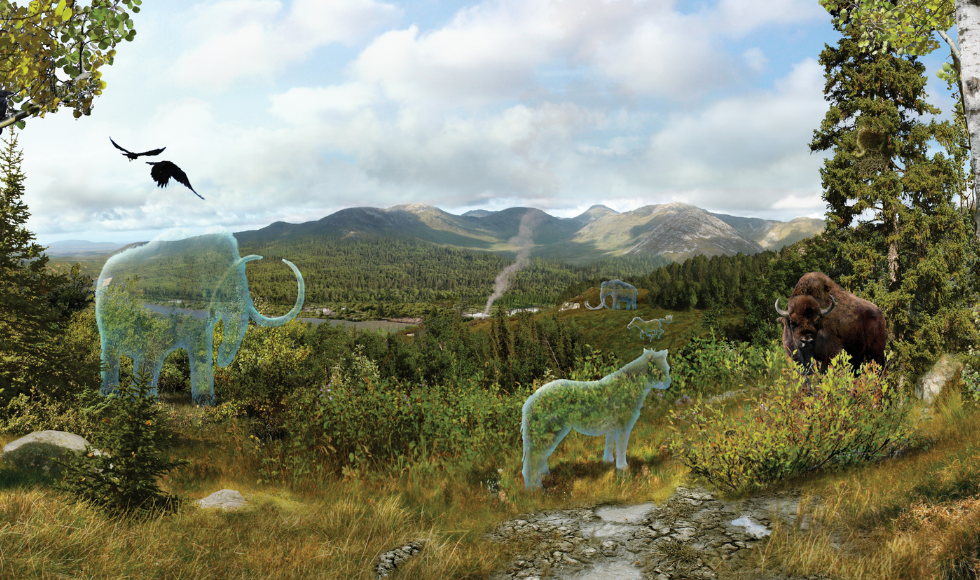 In 2010, small cores of permafrost sediments were collected by a team at the University of Alberta from gold mines in the Klondike region of central Yukon. They had remained in cold storage until paleogeneticists at the McMaster Ancient DNA Centre applied new genomics techniques to better understand the global extinction of megafauna that had culminated in North America some 12,700 years ago.

These tiny sediment samples contain an immense wealth of ancient environmental DNA from innumerable plants and animals that lived in those environments over millennia. These genetic microfossils originate from all components of an ecosystem — including bacteria, fungi, plants and animals — and serve as a time capsule of long-lost ecosystems, such as the mammoth-steppe, which disappeared around 13,000 years ago.

How exactly these ecosystems restructured so significantly, and why large animals seem to have been the most impacted by this shift has been an active area of scientific debate since the 18th century.

We can now use environmental DNA to help fill the gaps that have driven this debate.

Bacterial, fungal and unidentifiable DNA make up over 99.99 per cent of an environmental sample. In our case, we wanted a way to selectively recover the much smaller fraction of ancient plant and animal DNA that would help us better understand the collapse of the mammoth-steppe ecosystem.

For my doctoral research, I was part of a team that developed a a new technique to extract, isolate, sequence and identify tiny fragments of ancient DNA from sediment.

We analyzed these DNA fragments to track the shifting cast of plants and animals that lived in central Yukon over the past 30,000 years. We found evidence for the late survival of woolly mammoths and horses in the Klondike region, some 3,000 years later than expected.

We then expanded our analysis to include 21 previously collected permafrost cores from four sites in the Klondike region that date between 4,000 to 30,000 years ago.

With current technologies, we not only could identify which organisms a set of genetic microfossils came from. But we were also able to reassemble those fragments into genomes to study their evolutionary histories — solely from sediment.

The Pleistocene-Holocene transition, which occurred about 11,700 years ago, was a period of tremendous change across the globe. In eastern Beringia (the former Eurasian land bridge and unglaciated regions of Yukon and Alaska), this period saw the collapse of the mammoth-steppe biome and its gradual replacement with the boreal forest as we know it today.

This brought about the loss of iconic ice age megaherbivores like the woolly mammoth, Yukon horse, and steppe bison, along with predators such as the American scimitar cat and Beringian lion, among many others.

We found ancient environmental DNA from a diverse spectrum of ancient fauna, including woolly mammoths, horses, steppe bison, caribou, rodents, birds and many other animals.

We were also able to observe how ecosystems shifted with the rise of woody shrubs around 13,500 years ago, and how that correlated with a decline of DNA from woolly mammoths, horses and steppe bison. With this remarkably rich dataset, we observed four main findings.

When paired with other records, our genetic reconstructions suggest that the transition out of the last glacial period may have been more drawn out than dated bones alone would suggest.

Mammoths, for example, may have declined in local population abundance thousands of years earlier than other megafauna, which is potentially correlated with the first controversial evidence of humans in the area. Further, grassland grazing animals may have persisted for thousands of years in refugia (habitats that support the existence of an isolated population), despite the environmental shift.

Our data suggest that horses and woolly mammoths may have persisted in the Klondike until approximately 9,000 years ago and perhaps as recently as 5,700 years ago, outliving their supposed disappearance from local fossil records by 7,000 years. However, it is possible for ancient environmental DNA to survive erosion and re-deposition, which could mix the genetic signals of different time periods, necessitating a degree of caution in our interpretations.

Until recently, there was no evidence of mammoth survival into the mid-Holocene. But studies have now shown that mammoths survived until 5,500 and 4,000 years ago on Arctic islands.

Steppe bison, which were thought to have disappeared and been replaced by the American bison during the Pleistocene, have likewise been found to have survived even as recently as perhaps just 400 years ago. We were able to observe the presence of distinct genetic lineages of both woolly mammoths and steppe bison in the same sediment samples, which suggests that there were likely distinct populations of these animals living in the same area.

There is a growing body of evidence that many ice age megafauna probably survived well into recorded human history, roaming the north during the Bronze Age and while builders worked on the pyramids of Egypt.

Genetic archives of our ecological past

The growing sophistication of environmental DNA methods to study ancient genetic microfossils highlights just how much information is buried in sediments.

Permafrost is ideal for preserving ancient DNA, but as this perennially frozen ground thaws and degrades with a warming Arctic, so too will the genetic material preserved within, and the evolutionary mysteries they once held.

Advances in paleogenetics continues to push the boundaries of what was once relegated to science fiction. Who knows what undiscovered evolutionary information remains frozen in ordinary sediments, hidden in microfossils of ancient DNA?

Tyler J. Murchie is a postdoctoral fellow in anthropology at McMaster University. This article is republished from The Conversation under a Creative Commons license. Read the original article.