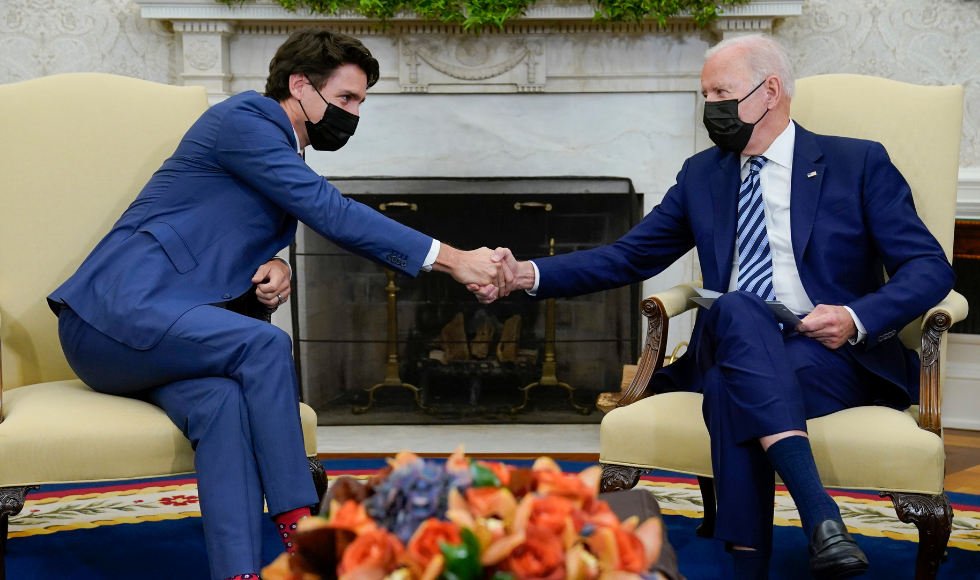 U.S. President Joe Biden shakes hands with Prime Minister Justin Trudeau as they meet in the Oval Office of the White House on Nov. 18, 2021, in Washington. (AP Photo/Evan Vucci)

U.S. President Joe Biden’s Build Back Better Act shows that American protectionism existed before and continues past the Donald Trump administration. Canada must finally learn from this hallmark of American politics and calibrate its trade policy to have a stronger industrial focus.

Under the proposed bill, consumers of electric vehicles can receive $12,500 (US) in tax credits. But to receive the full rebate, the vehicle must be produced by American manufacturers.

The act, not yet approved by the Senate, serves as a response to both economic and environmental crises. It aims to restore the American auto industry while addressing climate change.

Canada’s international trade minister, Mary Ng, says in a letter to congressional leaders that the bill is discriminatory and will cause “irreparable harm” to both Canadian and American auto sectors. Prime Minister Justin Trudeau said he also expressed concern about the rebates and their impact on continental trade in his recent Oval Office meeting with Biden.

U.S. protectionism is nothing new

Despite their frustration, Canadian policy makers shouldn’t be surprised. The proposed legislation is among a string of protectionist measures pushed by several administrations.

The Barack Obama administration supported Buy American provisions in the wake of the 2008 economic recession. Canadian policy makers complained at the time that the provisions were discriminatory, and they were ultimately watered down.

The Trump administration was especially protectionist. It applied tariffs broadly, including on Canadian steel and aluminium twice. By 2019, the United States was leading the world with more sanctions than at any other period in its history.

In April 2021, the Biden administration opened a Made in America Office and directed agencies to increase the amount of American content in their purchases.

The trend line in American trade policy is clear. Protectionism is back on table in significant ways.

Scholars have argued that crises demand exceptional state intervention to ensure a return to stability. The Biden administration must lead on the environment, the economy, health and social justice while staying politically viable. These pressures leave Biden with little choice.

Ng has already signalled Canada’s intention to fight the American EV rebates. Beyond the Canadian delegation’s recent lobbying visit to Washington, D.C., Ng has argued that the rebates are “inconsistent” with agreements like the Canada-United States-Mexico Agreement, known as CUSMA.

Setting aside the potential success of a challenge, Canada has other and better options.

The Canadian government has often been a driver of industry. Especially before the 1980s, Ottawa used federal subsidies, Crown corporations and strategic infrastructure developments to support industry.

Though these tools continue, new economic thinking has tended to push policy-makers away from their use. Instead, the preference has been to let the markets do the work.

While not all state inventions are the same as the consumer EV rebates in Biden’s Build Back Better legislation, their purposes are similar. Pro-industry policies help fuel economic growth and social cohesion and can assist governments in achieving other political goals, like net-zero emissions.

Canadian governments have the tools on hand to insulate domestic industries from significant market changes.

These tools are actively used in some areas. The government continues to defend dairy supply management, for example, as critical to our prosperity.

Canadian governments also use tax credits to promote consumption. Without limiting them to vehicles built in Canada, both federal and provincial governments offer electric vehicle subsidies. These subsidies have a similar dollar value to the current American proposal.

There may be reason to believe this is not a sustainable practice. But Canada has few other options.

It appears Canadian lawmakers are still hoping the Americans will exempt Canada from Build Back Better. Ontario’s Conservative government under Doug Ford is resisting electric vehicle rebates, while the Trudeau government continues to appeal to Washington to exclude Canada from the measures.

But even if Canada is successful in stopping the proposed EV rebates, American protectionism is here to stay.

While embracing protectionism is not to Canada’s advantage, holding out for exemptions isn’t good policy. Instead, Canada needs to accept the reality of global trading conditions.

Certainly, there are international responses for Canada. Canada should reflect on its Inclusive Trade Agenda more. This review should include a reconsideration of the value of global trade deals over bilateral agreements.

But Canada should also look inward. Targeted supports to Canadian industries will be needed to weather this protectionist storm.