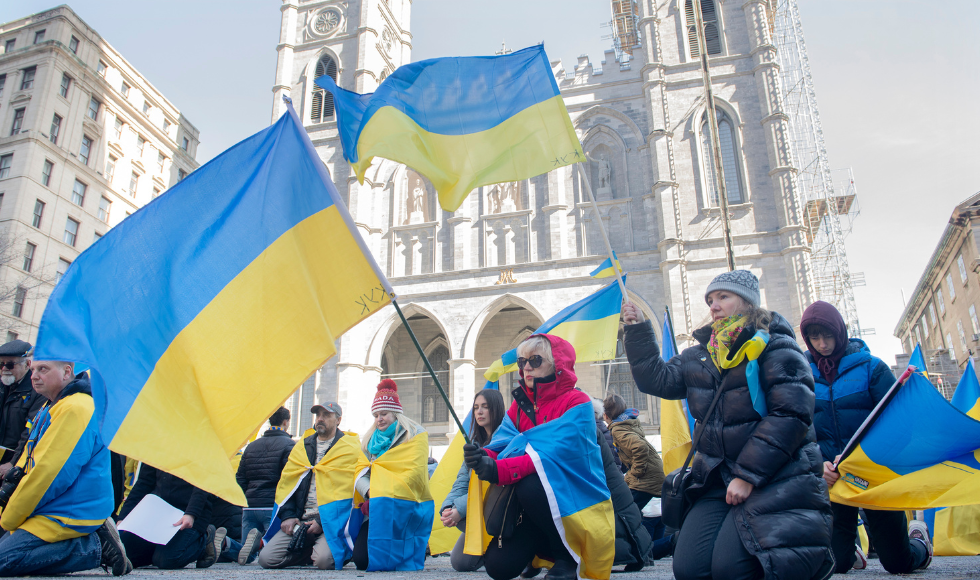 People rally in support of Ukraine outside the Notre-Dame Basilica in Montréal in April 2022. Scenes like these irritate Russia. (The Canadian Press/Graham Hughes)

We’re now almost into the fifth month of the Russian invasion of Ukraine, and one of the consistent features of Russia’s associated information war is its continuing efforts to defame and demonize Ukrainian diasporas around the world.

The term “diaspora” refers to groups of people that left their original homeland, but retain their sense belonging to it and feel an obligation to provide support for it.

Russia, and before that the Soviet Union, has always had a hostile attitude toward the Ukrainian diaspora.

There are monumets to Nazi collaborators in Canada and nobody is doing anything about it. #NeverForget #Holocaust #WorldWar2 pic.twitter.com/ANQ0FBk9k9

Where is the Ukrainian diaspora?

Ukraine has the eighth largest diaspora in the world.

With the long history of control first by the Russian Empire and later the Soviet Union, Russia hosts the largest population of Ukrainians. However, those Ukrainians have generally been forcefully assimilated and do not constitute established political communities who outwardly support Ukraine.

Those Ukrainians who have not been assimilated, who support Ukraine or do not buy into Russian narratives about the war have wisely decided to keep their heads down to avoid Russian security services paying a visit.

But in western countries like the United States, the United Kingdom and Canada, multi-generational Ukrainian diasporas have prospered and become politically mobilized. So why does Russia target them?

Read the uncut version of the Embassy comment, requested by “National Post”, which in its article of July 16th sadly omitted reference to complicity of #Nazi collaborators in ethnic cleansing and #Holocaust: pic.twitter.com/5cE5FVgxVV

In the post-Second World War era, the Ukrainian diaspora — along with others from eastern Europe — were historically anti-Communist and anti-Soviet, championing national independence. They also helped preserve and generate many elements of national identity and narratives.

They were constant thorns in the side of the Soviets. Russia’s current attacks draw on an old Soviet strategy to portray both Ukraine and its diaspora as “neo-Nazis.”

This Russian neo-Nazi narrative is rooted in the memory politics of the Second World War in Ukraine, the early alliances that the Organization of Ukrainian Nationalists (OUN) made with Nazi Germany and the OUN’s contested links to anti-Semitism.

While a declaration of independence by the OUN was made in the wake of the Nazi invasion in 1941, the OUN leadership were soon either imprisoned in concentration camps or executed.

This led the OUN — and its military wing, the Ukrainian Insurgent Army — to eventually fight both Nazis and Soviets. Their armed resistance against the Soviets continued long after the war ended in 1945.

Fled to the West

Many members of the OUN sought refuge in the West. They were joined by Ukrainians who had survived the 1932-33 famine and associated political repression under the Soviets.

In the immediate aftermath of the Second World War, the Soviets actively scoured European displaced persons camps, seeking to repatriate their citizens.

The Soviets also sought to undermine the Ukrainian national struggle and to cripple Ukraine’s legitimacy as a state. It’s no surprise that those advocating abroad for a free and democratic Ukraine, and now their descendants, were portrayed by the Soviets as “bourgeois nationalists” and now by Russia as Nazi collaborators and facists.

Amid today’s war, some western leftists, in their obsession with the politically insignificant far right in Ukraine, help to reinforce this longstanding Soviet/Russian narrative.

Fascism and anti-Semitism are not glorified by today’s Ukrainian diaspora. Many members of the western diaspora are first-generation who migrated from Ukraine after 1991. Some have been in the West for generations, and value equality, diversity and democracy.

What is glorified by the diaspora — and by Ukrainians in Ukraine — is the broader national liberation struggle against Soviet and now Russian domination.

The relationship between ethnic Ukrainians and Jews in Ukraine has been undergoing a long, and arguably successful, process of reconciliation. The co-operation between Ukrainian and Jewish communities in the West certainly annoyed Soviet authorities, who ridiculed it via propaganda.

More recently, the U.S.-based Anti-Defamation League has documented numerous cases of Russian-inspired false flag anti-Semitic operations in Ukraine in order to feed its narrative. In 2020, the organization said:

“Russia’s characterization of Ukraine as a fascist, xenophobic and anti-Semitic state is starkly at odds with reality.”

The Ukrainian diaspora played a key role in Ukraine’s independence and national development. Members of the diaspora helped to establish the first democratic institutions in newly independent Ukraine in 1991.

From the first Ukrainian elections, diaspora members served as monitors in order to ensure peaceful transitions of power and that democratic norms were respected.

Diaspora historians have also helped foster a more nuanced and deep understanding of Ukrainian national history. Diasporas actively supported pro-democratic revolutions, including the Orange Revolution of 2004 and the 2014 Euromaidan conflict.

With this important support from abroad, Ukraine progressed in a very different direction than its neighbours of Russia and Belarus, where authoritarian regimes solidified.

The rhetoric and actions of the Kremlin make it clear that Russia cannot tolerate a free and democratic neighbour.

The constant attacks on Ukraine’s diasporas are a subtle confirmation of the need for Ukraine to repel the aggressor and continue its development as a free democratic nation.

McMaster Daily News sat down with Savage Bear, formerly known as Tracy Bear, Director of McMaster Indigenous Research Institute (MIRI), to discuss advances made by the Institute and its collaborative partners.