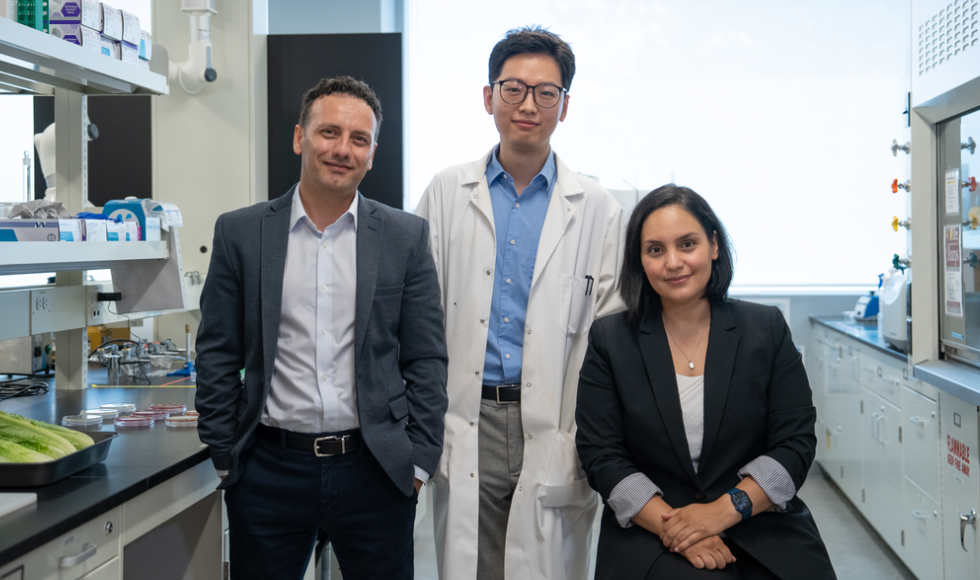 Researchers at McMaster University have created a powerful new weapon against bacterial contamination and infection.

They have developed a way to coax bacteriophages — harmless viruses that eat bacteria — into linking together and forming microscopic beads. Those beads can safely be applied to food and other materials to rid them of harmful pathogens such as E. coli 0157. Each bead is about 20 microns, (one 50th of a millimetre) in diameter and is loaded with millions of phages.

The researchers’ sprayable new super-disinfectant is food-safe and highly effective, as they describe in an article  published in the influential journal Nature Communications.

“When we spray it on food, we basically gather billions of mini-soldiers to protect our food from bacterial contamination,” says Tian, who led the study as part of his PhD research.

The research builds on the same chemistry work that Hosseinidoust’s lab had previously used to trigger phages to connect to one another in quantities sufficient to form a gel.

“They link together like microscopic Lego pieces,” she says. “This organized natural structure makes them much more durable and easier to package, store and use.”

Before the introduction of penicillin in the 1940s, research into phage disinfectants and therapies had been very promising, but interest in developing their potential dimmed once antibiotics made from penicillin came onto the market. With antimicrobial resistance now sapping the power of existing antibiotics, there is intense new interest in phage research.

When phages — which occur naturally in the body and in the environment — contact target bacteria, they multiply, explosively increasing their antimicrobial power as they work.

“It’s a chain reaction, creating a dynamic and ongoing response that is even more overpowering than antibiotics,” Didar says.

“No other antibacterial product — not even bleach — has the special properties that phages do.”

Another major advantage of using phages in agriculture and food production is that they can be directed very specifically to take out harmful strains of bacteria without killing beneficial bacteria that enhance foods’ taste, smell and texture.

The new phage spray has promising potential for commercial application, the researchers say, especially since phages have already earned approval from the US Food and Drug Administration for use in food.

The research paper shows the sprayable material can eliminate E. coli 0157 in lettuce and meat, which are often the sources of disease outbreaks.

The researchers say the same approach can readily be used against other bacteria which cause food poisoning, such as Salmonella and Listeria — individually or in combination.

Phage sprays could be used in food processing, packaging and cleaning, and even as a treatment for irrigation water and equipment, stopping contamination at the source, the researchers say.

The research, completed under the umbrella of McMaster’s Global Nexus for Pandemics and Biological Threats, combines and extends the previous work of Hosseinidoust’s lab with work that Didar and other McMaster colleagues had done to create microscopic sensors and surfaces to detect and repel food pathogens.

Co-authors on the paper also include Leon He, Kyle Jackson, Ahmed Saif and Zeqi Wan.

The group next plans to test the new material’s promising applications in medicine, where it might be used in disinfecting wounds, for example. Medical applications will take more time to be proven safe and effective, but a product made for disinfection in food processing could make it to market much more quickly.