Blurring the boundaries between science and engineering 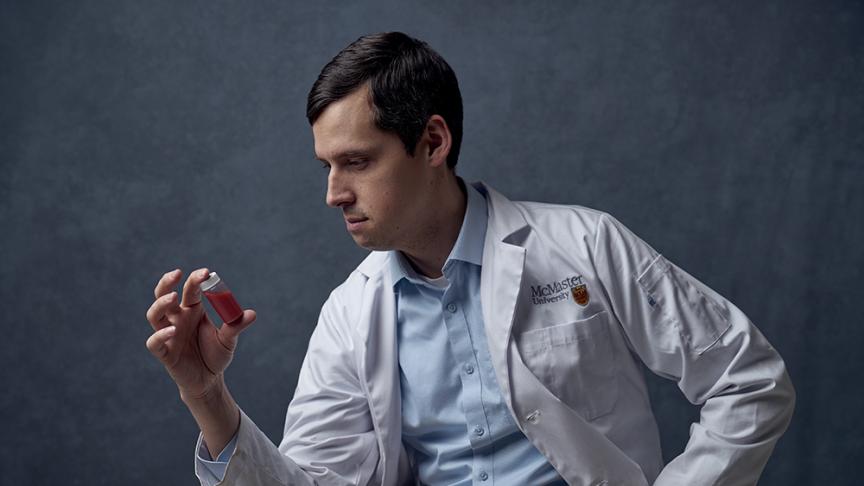 In truth, he’s a little of both – and that’s just the way he likes it.

That’s where the fun is.

Hoare works with hydrogels – networks of absorbent, flexible polymers that swell in water. They’re used in applications as varied as disposable diapers, burn dressings and explosives. (Just to be clear, there aren’t actually any explosives in Hoare’s lab)

There’s lots of other work, though. Hoare and one of his PhD students, Rabia Mateen, have developed a printable sensor that can be used in early-stage drug discovery, reducing the amount of time and money spent on testing and speeding up the discovery of new drug therapies.

And he’s worked on ways to use hydrogels to deliver a range of drugs from eye drops to injectables that target tumours to inhaled drugs that can be used for brain disorders like Parkinson’s and schizophrenia.

Hoare says his interest in “materials and making stuff” is thanks to a high school chemistry teacher who got him interested in the intersection between science and engineering. After completing the engineering chemistry program at Queen’s University, he came to Mac, completing his PhD in chemical engineering in 2006. After a postdoctoral fellowship in Robert Langer’s lab at MIT, he returned to Mac as a faculty member in 2008.

In the 10 years he’s been at McMaster, his work hasn’t gone unnoticed. Among other recognitions, Hoare won the John Charles Polanyi Prize in Chemistry in 2009, received the 2016 Early Career Investigator Award from the Canadian Biomaterials Society and an Early Researcher Award from the Government of Ontario. His work has also been profiled by Maclean’s, Popular Science and the BBC.

And while awards are appreciated, what really makes Hoare tick as a researcher is the chance to work with other departments and disciplines, solving problems and working on projects that have real-world applications.

“There are a lot of problems you don’t even realize exist until you talk with people in other faculties,” he explains. “Once you get talking, though, you’ll find out about a problem that you have the technology to help solve. You learn a lot – two years ago I didn’t even know plants had an immune system, and now we’re working on modifying them.”

Teaching also brings a lot of rewards, especially students’ enthusiasm to try new methods and materials. Hoare says he encourages his students to try new ideas –in fact, both the tissue sheets and the printable drug-testing sensors were developed from students’ ideas.

“Professors don’t have the monopoly on good ideas,” he says. “If a student has a big idea they think might work and is really passionate about it, I will almost always say yes – because if it doesn’t work, they’ve learned something, and if it does work, it could turn into something we hadn’t envisioned.”

Working with others to take ideas from inspiration to usable products is a key aspect of Hoare’s work. His lab website currently lists 14 patents, with others in progress.

“We’re using the science we’ve developed to make something that will hopefully be useful to people,” he says. “The university and Faculty of Engineering are really good at creating an environment that’s amenable to collaboration. That’s the thing we really have going for us.”

This article is part of a series of profiles celebrating the 60th anniversary of McMaster’s Faculty of Engineering. For more Big Ideas stories, go to the faculty’s website.