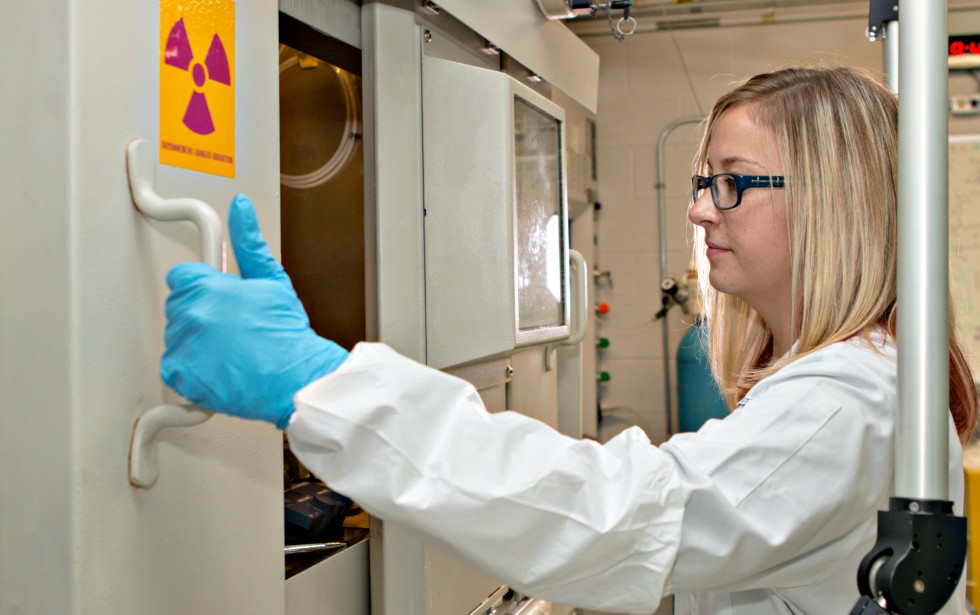 McMaster student Stephanie Rathmann, who is finishing her second year of doctoral studies in Chemistry, is the inaugural recipient of the Brian McCarry Graduate Chemistry Scholarship.

Stephanie Rathmann, a McMaster PhD student who is developing a new method of using radioactivity to more precisely target and fight cancers and other diseases, is the recipient of the Brian McCarry Graduate Chemistry Scholarship.

Rathmann, who is finishing her second year of doctoral studies in Chemistry, is the inaugural recipient of the award, which was established in 2014 by friends, family, colleagues, and industry partners in memory of Brian McCarry, long-time chair of the Department of Chemistry and Chemical Biology, beloved instructor and renowned air quality researcher.

Rathmann’s research is focussed on developing a new form of targeted radionuclide therapy, a treatment that delivers doses of radiation to tumours or other diseases by using small molecules with a radioactive tag designed to seek out cancerous or infected cells.

She is currently working on a new method, or platform, for the development of radiopharmaceuticals – a group of drugs that uses medical isotopes to diagnose and treat disease – that she hopes will more effectively target and attack cancerous cells and bacterial infections without damaging the surrounding tissue.

“I really like the idea of using radioactivity to treat diseases because, unlike with chemo, you inject just a small amount of the compound into the patient, so it really shouldn’t have nearly as many side effects,” says Rathmann who is currently testing her treatment platform on bone cancer as well as on bacterial infections. She says if her platform is effective, it could be modified to treat almost any form of cancer or disease if a target can be found.

So far, Rathmann, whose supervisor is John Valliant, a professor in the Department of Chemistry and CEO of the Centre for Probe Development and Commercialization, has shown that her compound may be effective in treating bone cancer, and is now seeking approval for therapy studies to confirm her findings. She hopes to begin these studies next year.

Rathmann says the funding she has received through the scholarship is helping to support her work, lessening her financial burden and allowing her to focus on her research.

“I truly appreciate this scholarship, it makes a huge difference,” says Rathmann who completed both her undergraduate and Masters degrees at McMaster and was at one time a student of McCarry’s.

“Dr. McCarry taught my fourth-year analytical chemistry course, which was invaluable to me – I often find myself referencing his notes to this very day,” she says. “I also have fond memories of chatting with Dr. McCarry at the Phoenix on Friday nights and countless memories discussing chemistry as well as career options and current events. I am deeply touched to be the recipient of this particular award which not only provides me with funding, but also recognizes a very influential mentor.”

Rathmann has received a number of awards throughout her academic career including the Boris Scholarship, the Russell Bell Travel Award and the Hyperchem Scholar Award for her undergraduate thesis, which was presented to her by McCarry.

The Brian McCarry Graduate Chemistry Scholarship is awarded by the School of Graduate Studies and is intended to support a student enrolled in the Chemistry graduate program, with preference given to those pursuing industry-related research. Winners are selected based in academic standing and departmental recommendations.