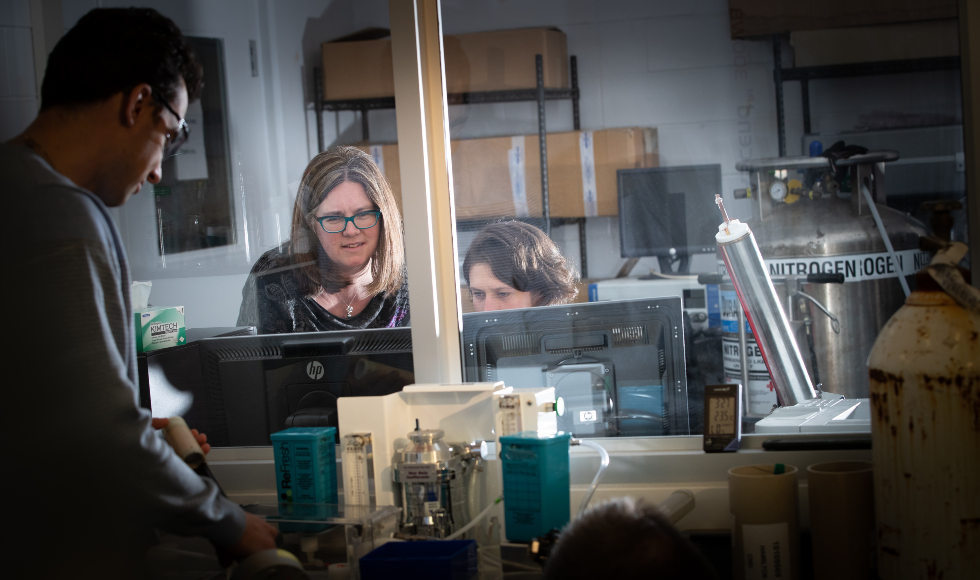 Gillian Goward (centre) with graduate students in her lab. (Photo by JD Howell)

Theoretically, batteries are simple. First developed in the late eighteenth century, batteries use chemical reactions to create a flow of electrons between two terminals that, when hooked up to a circuit, can be used to power everything from flashlights to cars.

You can make a battery from a lemon, a galvanized nail and a piece of stripped copper wire. Touch your tongue to both the nail and the wire, and you’ll feel the gentle tingle of a weak electrical current.

It’s not (quite) rocket science.

“On paper, batteries ought to work,” explains Gillian Goward, chair of McMaster’s department of Chemistry and Chemical Biology. “On paper, we should have had electric vehicles 20 years ago.”

Except we don’t – because batteries, especially the rechargeable lithium ones in vehicles and cellphones and computers, aren’t actually that simple, at least when you want them to do more than make your tongue tingle.

And so on. As the old saying goes, out of fast, cheap and good, you can only pick two.

Goward is trying to address these challenges in her Magnetic Resonance and Materials for Energy Storage lab, where she and her students use a technique called nuclear magnetic resonance to study how lithium and other types of batteries and fuel cells work at a fundamental level.

Similar to a hospital MRI, NMR allows Goward and her team to see how lithium nuclei change as a function of battery cycling, age, temperature or choice of materials. While an imaging device like an electron microscope would give Goward a static picture, NMR allows her to see how things change and move in real time, on the battery itself.

It’s a capability that only half a dozen in the labs in the world have, and Goward’s lab is right out on the leading edge.

She and her team regularly collaborate with researchers in other disciplines, including mechanical and materials engineers, as well as industry partners. “All the real innovation is happening at the boundaries,” she says. “Going outside of where core expertise lies is where the real discoveries are happening.”

That’s an interesting place to be for a researcher who, when she started at McMaster as an undergraduate in 1991, figured she was going to be a medical doctor – until a chemistry professor in her fourth year got her interested in solid-state chemistry. That led to starting grad school in 1995 at the University of Waterloo with Linda Nazar. Nazar’s lab had just started working on lithium batteries, which Sony had patented four years before, and a side project in NMR turned into Goward’s PhD project.

Following a postdoc fellowship at the Max Planck Institute for Polymer Research in Mainz, Germany, Goward made her way back to McMaster in 2002 – the only woman on faculty in her department at that point.

Goward is hesitant, though, to emphasize gender too much when it comes to her work.

“I don’t find my gender changes how I do my science – I make decisions based on the science that’s in front of me, and I assume my peers are doing the same,” she says. “More and more, though, as I take on leadership roles, I’m finding that people are still wanting to talk about this, and it’s obviously a problem.”

Goward, who maintains a 50-50 ratio of male and female students in her research group, suggests there are a couple of key points where it’s possible to address the challenges of attracting more women to science.

“You can start at a really early stage, with kids who are in their early teens – convincing 13-year-olds like my daughter not to let someone call them a geek just because they did well on a math test,” she says. “At the other end of the pipeline it’s really about what they choose to do after their PhD. There’s a pretty equal gender balance in our department at the PhD level, but the applicant pool for our current hire there were only 25 per cent women. We’re working on ways to create a structure that allows for a better balance.”

For Goward, the best part of her work is showing students that chemistry is an ever-evolving field of discovery. She’s not teaching undergrads right now, but says her research group is an ideal place for her grad students to stretch their interests.

“Working with students is all about passing on your curiosity and making sure they understand that chemistry isn’t a completed science,” she says. “There are so many open questions when you look at things from the lens of molecular-level and dynamic processes. The kinds of experiments we’re doing are certainly unique, and it’s rewarding to tell students that we’re contributing something that no one else can.”