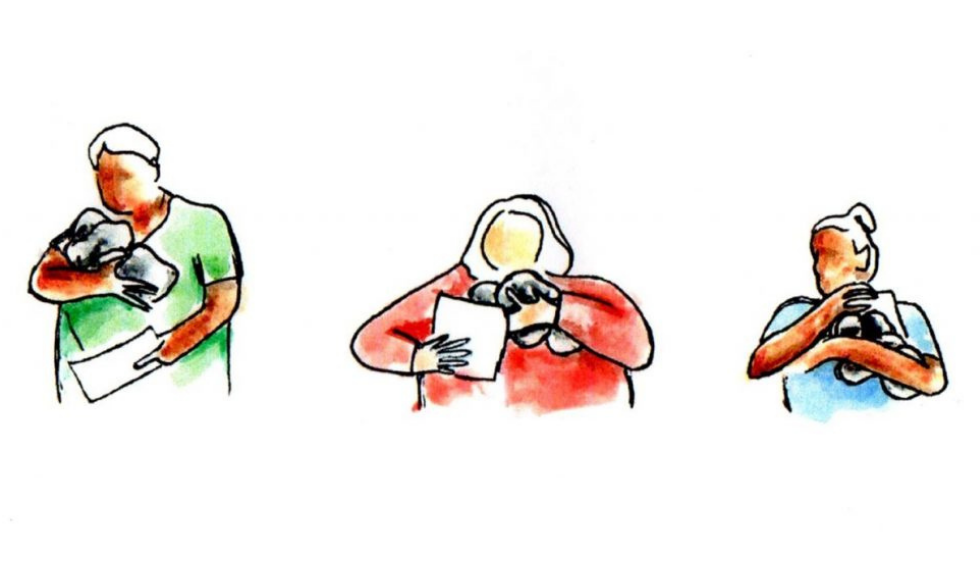 An illustration by Melanie Skene for “We Need to Talk,” a play developed with women connected to the Housing and Planning Collaborative Advisory of Hamilton.

Once upon a time, Catherine Graham, a professor of theatre and film studies in McMaster’s Faculty of Humanities and Christina Sinding, director of the School of Social Work in the Faculty of Social Sciences, had a powerful idea.

From their research experience in social work and theatre they knew that marginalized folks in Hamilton had few ways to meaningfully contribute to public discussions around big issues – even ones with which they’d had personal experience, like precarious housing, navigating the thicket of the city’s social services, and the role of community in changing systems driven by profit and efficiency.

To provide an accessible forum for participants and, eventually, the people who would listen to them, they would use theatre: plays developed collaboratively by participants and facilitators to draw attention to key issues in the community like income inequality, housing and employment.

And as they were doing their work in the community, they would also share their findings with other researchers – social work educators, theatre researchers, anthropologists, medical humanities specialists – through journal articles and conference presentations.

In 2015, they began their work. They called the project Transforming Stories, Driving Change (TSDC), which became a collaboration between McMaster’s School of the Arts, School of Social Work, and a host of community and artistic partners across Hamilton.

“We started with the question of how theatre could encourage public discussion. People don’t get a chance to participate in public forums, not because of the content of what they say, but because the form in which they’re saying it isn’t recognized or valued.”

Catherine Graham, an associate professor in McMaster’s Theatre & Film Studies program who, along with Christina Sinding, the director of McMaster’s School of Social Work, began the project back in 2015.

Working with support from the Social Sciences and Humanities Research Council (SSHRC), Good Shepherd Centres Hamilton, the Social Planning and Research Council of Hamilton, and the Hamilton Community Foundation, TSDC facilitators worked with young people, people in difficult housing situations, women seeking social assistance, and those who were participating in city discussions about poverty.

As each play was completed, they held public performances and talkbacks for live audiences, including social service workers, social work, labour studies and theatre students, and anyone interested in reimagining their community with the help of perspectives that weren’t often heard.

“This was a project of ‘uncommon partnerships’ – people from different ‘worlds’ who have knowledge about the issues and a shared goal of wanting to cultivate public discussions about Hamilton’s future that are more accountable to people who are socially marginalized in Hamilton’s present. We hoped that these performances could help shift conversations in a new direction.”

Helene Vosters, a postdoctoral fellow, TSDC Project Coordinator, and one of the principal authors of the Transforming Stories, Driving Change workbook released in April 2021.

Importantly, the plays were fictional, not biographical, so participants didn’t feel like they had to make their personal stories public – like their pain was being exploited for the benefit of an audience.

“What was powerful about the plays was the opportunity for people to talk about the system that they’re struggling with – but take the narrative away from their individual stories and talk about why these things keep happening, and the systems that everyone was dealing with.”

Sarah Adjekum, a social worker and PhD student at McMaster, who worked on the play “Choose Your Destination,” developed with youth involved with the Good Shepherd Centre in Hamilton

Over five years, TSDC facilitators and participants, called performer-advocates, developed four live plays and a fifth presentation, which was recorded on Zoom because of the COVID-19 pandemic.

The fifth work, called “Can You Hear Me Now?” was created in the midst of the pandemic. Although the question “Can you hear me?” has become a common phrase on Zoom during the pandemic, in the piece it took on a wider meaning, reflecting the performer-advocates’ awareness that many more people were experiencing economic precarity and isolation – and the hope that, once the pandemic was over, that public values would shift.

Members of the TSDC research team also presented at a number of academic conferences, including, among others, the Canadian Associations for Theatre Research and the America Society for Theatre Research, The Society for Applied Anthropology and the Qualitative Analysis conference. Their journal articles were published in Studies in the Education of Adults, Qualitative Social Work, and InTensions Journal.

Eventually, in 2021, the Transforming Stories, Driving Change project came to a close.

But the researchers and their community partners have left a gift to those who would do the work in the future: a free online workbook designed to help others use performance-creation as a platform for widening  public debate to new experiences and voices – one that walks future practitioners and community collaborators through the process, step-by-step, with everything from developing community within a performing group, to creating prompts for improvised interaction, to creating sets and props.

“Some people may see arts-based methodologies as easy, or kind of flaky, or that anybody can do it. Our team has thought carefully about how this works. There is a lot of solid thinking, particularly on Catherine’s part, that went into how to do this ethically, and in a way that makes everybody feel good and excited.”

Jennie Vengris in a blog post on the Transforming Stories, Driving Change website. Vengris is an associate professor of social work at McMaster, and has been involved with the project since 2015, when she participated in the workshop series for “We Need to Talk,” which involved women connected with the Women’s Housing and Planning Collaborative Agency of Hamilton.

And so, like the plays the TSDC research team has worked alongside performer-advocates to create, the research project’s end is also a beginning.

“This isn’t just about who gets a voice at the table – it’s about reinventing the table and focusing on the voices. This process allowed us to share some of our experiences without feeling exposed. We felt like the VIPs in the room with the knowledge, and not like the needy asking for support.”

To learn more about the story and work of Transforming Stories, Driving Change, you can download their workbook through eCampus Ontario or visit their website.