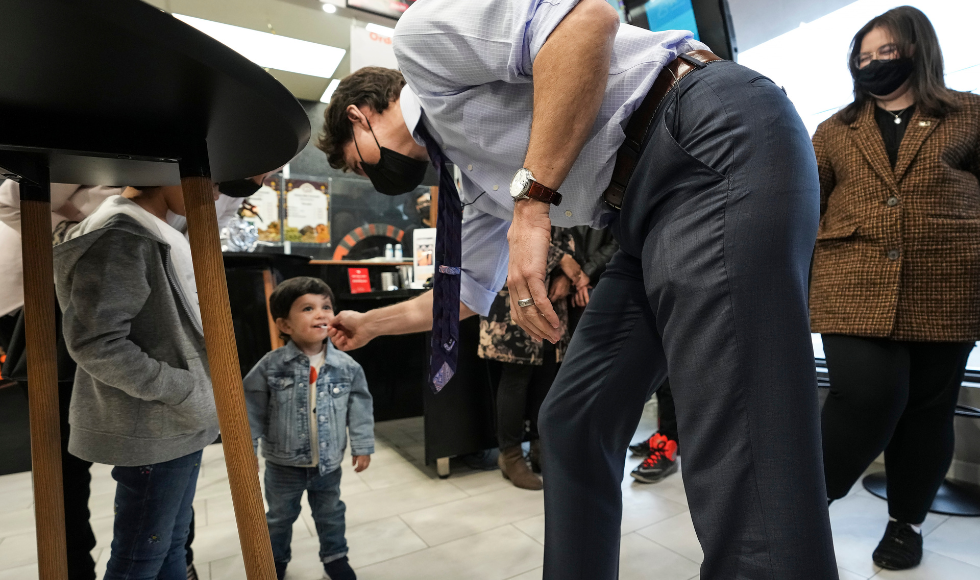 Prime Minister Justin Trudeau meets with families who had resettled from Afghanistan in Hamilton, Ont., in May 2022. THE CANADIAN PRESS/Nathan Denette

BY Geoffrey Cameron and Shauna Labman

While most news reports focused on the significant rise in economic immigrants, the refugee targets are record-breaking.

If Canada sticks to its plan, it will resettle more refugees in 2023 than in any year since before 1979. Next year, the goal is to resettle more than 50,000 refugees.

This is more than the number of refugees Canada admitted in 2016, when the Liberal government launched an ambitious and celebrated program for Syrian refugees.

It is more than Canada accepted in 1991 after the end of the Cold War.

And it is more than arrived in Canada in 1979 or 1980 in the midst of the Indochinese refugee crisis, which led the United Nations High Commissioner for Refugees (UNHCR) awarding the people of Canada the Nansen award for outstanding service to the cause of refugees.

Despite the restrictions imposed by the COVID-19 pandemic, Canada has led the world in refugee resettlement for the past three years. Nevertheless, the targets set by Immigration Minister Sean Fraser will require a significant increase in state capacity.

But it’s easier to set a policy goal than to implement it. Slow processing times have already limited the government from delivering on its resettlement goals. And meeting these ambitious targets will require corresponding investments in personnel and more efficient processes.

Canada’s refugee targets also reveal how important the private sponsorship program is to the implementation of the government’s goals.

Private sponsorship allows registered organizations (known as Sponsorship Agreement Holders) and informal groups to sponsor specific refugees if they pay for a portion of the first-year settlement costs, which can amount to tens of thousands of dollars for a family.

For most of the 1980s, 1990s and early 2000s, private sponsorship constituted less than half of the government’s annual commitment to resettlement. By 2025, it will be nearly double the number of government-assisted refugees.

Lessons for other nations

In our book Strangers to Neighbours: Refugee Sponsorship in Context, we examined Canada’s refugee sponsorship program and what lessons it might have for other countries.

Many refugee advocates point to the principle of what’s known as “additionality” as an important part of the program: they argue that private sponsorship should complement, not replace, government commitments to refugees.

While the government-assisted stream of refugees will remain historically high for the next three years, that commitment is projected to decline by more than 30 per cent between 2023 and 2025. Meanwhile, private sponsorship will continue to rise.

Advocates will be watching closely to ensure the government’s international humanitarian duties are not unduly shifted onto private citizens.

Another key element of Canada’s private sponsorship program is known as “naming,” which allows sponsors to identify the refugees they would like to help resettle in Canada. The advantage of this provision is that it allows relatives and community groups in Canada to sponsor refugees, who arrive with a ready-made social network.

In fact, private sponsorship often works as a de facto family reunification program — albeit one that imposes significantly higher financial costs on sponsors than the established route of family migration.

The Canadian government has sought to reduce the role of naming in its refugee programs in favour of allowing its visa offices to refer people who most need protection to sponsoring groups.

The Blended Visa Office-Referred (BVOR) program was introduced in 2013 as a way for sponsors to support refugees the government had selected through referrals from the UNHCR.

The financial obligations of sponsors were significantly reduced for groups willing to forgo naming. Nevertheless, the BVOR has held very limited appeal for sponsors — outside of the public mobilization of support for Syrian refugees — and it has declined annually since 2016.

Fewer than 150 refugees came to Canada under the BVOR program in 2020 and 2021, combined and the targets for future arrivals (250 per year) are now a quarter of what was announced earlier this year.

The decline of the BVOR program is significant because Canada’s very public international effort to export its private sponsorship program has often focused on elements of the BVOR model, which does not give sponsoring groups the authority to “name” refugees.

Other governments are reluctant to delegate their authority over refugee selection to citizen groups; they prefer to work exclusively with the UNHCR to receive case referrals.

While other nations, including the United Kingdom and the United States, have been receptive to Canada’s resettlement policies, they may be implementing a model that has limited public appeal in the long run. Naming sustains support for private sponsorship in Canada, primarily because it enables Canadians to be specific about their humanitarian efforts.

If the government sticks to its new plans for refugee resettlement, the next three years could have significant implications for refugees and refugee policy beyond Canada’s borders.

The Globe and Mail: How a ‘professor-entrepreneur’ career track will help solve Canada’s innovation problem

'The more we know about the way things work on the other side of the street, the more likely it is our innovations will reach the marketplace, where they can serve to improve the way we all live,' writes Engineering Professor Tohid Didar.