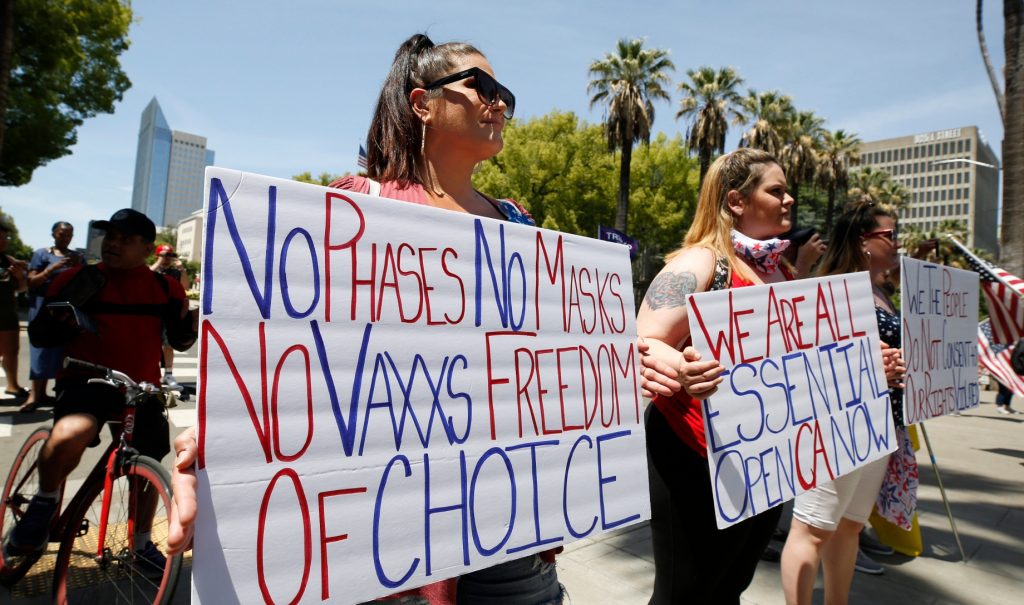 Shannon Rose, left, joined other demonstrators calling for Gov. Gavin Newsom to end the stay-at-home orders during a protest at the state capitol in Sacramento, Calif., on May 9, 2020. (AP Photo/Rich Pedroncelli)

Jeremy Cohen is a doctoral candidate in Religious Studies at McMaster University. This article is republished from The Conversation under a Creative Commons license. Read the original article.

People defy government shelter-in-place orders and pandemic-related hygiene practices in response to the terror posed by the risk of death.

I research new religious movements and study relationships between death and technology. While it is only one answer among many, anxiety about death can offer some insight into the growing coronavirus culture wars.

Social psychologist Sheldon Solomon argues that people employ risk management strategies to mitigate the terror of human finitude. That is, under normal circumstances, we might push the thought of death out of our minds; we might turn to the life-extending promises of biomedicine or we might join a gym, all in an attempt to extend our mortality.

The need for reassurance in the face of mortality offers some insight into why conspiracy theories around mass vaccinations, government cover-ups, microchip implants and empty hospitals are engaging new audiences.

When the risk is more direct and when threats to our life are more present, we might seek assurances of our immunity to death through more extreme measures like rallying against a lockdown.

Despite the evidence, conspiracy theorists are falsely linking the spread of COVID-19 to the implementation of 5G cellular networks. In the United Kingdom, over 50 5G towers have been vandalized. Four 5G towers were set on fire in Québec. And broadband workers in the U.K. are being spat on and stabbed by conspiracy theorists.

These aren’t the only extreme acts posing a threat to public health connected to conspiracies. Social media influencers have filmed themselves licking toilet seats as a “coronavirus challenge.” In April, an engineer tried ramming his train into a naval hospital ship in Los Angeles, incorrectly believing it part of a government conspiracy. And the anti-vaxxer movement is spreading misinformation and labelling COVID-19 a manufactured “plandemic.” (It is not.)

Reopen protests and the denial of death

Our relationship to death is paradoxical, writes French philosopher Françoise Dastur. We manage our anxieties by running towards death — risking our lives through extreme sports, for example — but we simultaneously organize our lives to ignore death. If we survive running a marathon or skydiving, we symbolically overcome our mortal nature.

"Sacrifice the Weak" – imagine not just thinking of this but actually writing it out AND taking it out on the street in Nashville, Tennessee. pic.twitter.com/dLPutBoJzG

As coronavirus death rates rise, #Reopen protesters in American and Canadian cities are calling for a return to economic and social normalcy, arguing that our freedoms are curtailed by shelter-in-place orders. Putting oneself in harm’s way by attending a #Reopen rally, or by licking a toilet seat, could be viewed as its own kind of extreme sport — one where people prove the ultimate truthiness of their political ideologies, while symbolically demonstrating their invincibility.

The #Reopen protesters are directly ignoring one kind of death, those of the marginalized communities disproportionately affected by coronavirus. Similar to privileged assurances by some conservative pundits that coronavirus poses no danger because it will only kill the elderly, diabetic and “sickly,” calls to reopen hair salons and other nonessential services ignore racial inequalities and the vulnerable workers who staff these premises.

Coronavirus as dirt out of place

In her account of taboo and cleanliness, anthropologist Mary Douglas explored how societies are often organized around their hygienic norms, writing:

As Douglas argued, we create boundaries as a way of dealing with things that fall between the cracks of our conceptual categories. The dangers of COVID-19 are real, but much like calls for repentance during ancient epidemics, rituals of containment are also symbolic and culturally meaningful. And a lack of containment threatens social order.

Physical distancing, handwashing, donning protective masks and applying hand sanitizer are all pragmatic steps to keep ourselves and our communities safe. Yet these are also attempts to deal with existential uncertainty by putting boundaries around a virus we cannot control.

The reality, of course, is that there is a lot to be anxious about at the moment. Over 320,000 lives have been extinguished, people are dying alone inside hospitals and nursing homes, and physical distancing guidelines leave families to grieve without social support systems.

Like dirt, the coronavirus is matter out of place — an invisible menace to social order and individual life.

Coronavirus is a reminder of the continued unknowability of so much in our world. In the end, the conspiracy theorists, civic-minded and even the “covidiots” all share something in common: the inevitability of death.

Jeremy Cohen is a doctoral candidate in Religious Studies at McMaster University. This article is republished from The Conversation under a Creative Commons license. Read the original article.