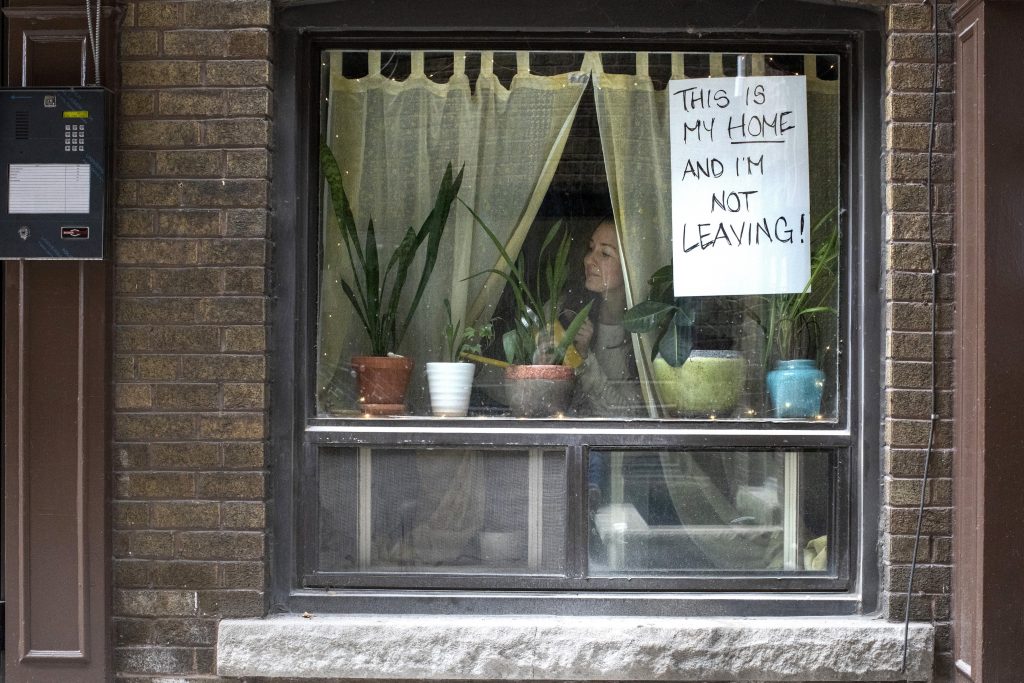 A woman is pictured at the window of her west Toronto apartment in March 2020 as her landlord issued eviction notices at the start of the pandemic. Secure and affordable housing is a big concern of those collecting social assistance, whether it was CERB or provincial programs. THE CANADIAN PRESS/Chris Young

The federal government’s economic response to COVID-19 included a new income support called the Canadian Emergency Response Benefit (CERB). What was it like to live on CERB when it was available, and how did it compare to the situations of those who were either still working or receiving provincial social assistance?

Surviving on CERB’s $2,000 per month was certainly a pinch. Given median employment income in Canada was $36,900 in 2019, the CERB only replaced two-thirds of monthly employment income for the average Canadian. Given half of Canadians are only $200 away from insolvency on a monthly basis, that was a big hit.

Yet for those receiving provincial disability and welfare payments, the CERB was the lap of luxury. Under the Ontario Disability Support Program, people continued to receive only $1,169 per month (with one-time pandemic top-ups of $100 per month until the end of July 2020). This is just two-thirds of the CERB level, but still above the $733 per month provided to Ontario social assistance recipients who did not qualify for CERB.

To understand what it was like to survive on CERB compared to provincial social assistance programs, we surveyed Ontarians about their employment and income situations during the COVID-19 pandemic. We received nearly 800 responses to our online survey, which allowed us to assess the relative experiences of these groups.

A basic goal of CERB was keeping people fed and housed during the lockdown. CERB recipients were similar to people who were still working when it came to feeding themselves, but were closer to those receiving provincial social assistance in their assessment of housing security. A third of social assistance recipients often did not have enough to eat; half had days with no food. Sixty-three per cent bought nutritious food less often, and nearly a third made increased use of food charities.

By contrast, recipients of CERB did much better, with only one-tenth going a day without food, and one-quarter buying nutritious food less often. Their rates of distress on these measures were only slightly higher than those receiving neither CERB nor social assistance.

If CERB recipients continued to eat well, this was at the cost of housing security. Over half reported struggling to keep up with rent and mortgages. Compared to working people, CERB recipients were three times more likely to be concerned about being evicted or having to move. Their level of housing worries were close to those of respondents receiving social assistance.

Despite these hardships, CERB recipients were the group that gave the best rating to the government’s economic response. As respondent comments made clear, the CERB was an economic lifeline when the economy shut down.

Recipients of social assistance were the least satisfied, with only one in seven approving. While their incomes did not drop during the pandemic, their costs did rise, and survival strategies based on mutual aid became difficult under lockdown. Eighty per cent claimed they suffered the loss of meaningful relations, compared to only half for CERB recipients and those still working.

What policy lessons did the recipients of CERB and provincial social assistance draw from their experience? Here the solitudes converge.

Two-thirds of both groups became more favourable of the role of government in supporting society. Asked to name three policy priorities for extending government support, basic income was the most popular, with nine out of 10 social assistance recipients and nearly three-quarters of CERB recipients listing it in their top three choices. This was followed by affordable housing (66 per cent and 51 per cent respectively) and a dental plan (45 per cent and 49 per cent).

Read more:
How to build a better Canada after COVID-19: Transform CERB into a basic annual income program

These opinions mesh with a number of policy blueprints for renewing social protections for citizens. The Caledon Institute proposed revamping benefits to provide income, housing, training and disability benefits for all low-income individuals.

Others have argued for an expansion of public services, dental, vision and drug benefits to ensure that people can look after their basic health regardless of the quality of their jobs or whether they’re working at any given time. The December 2020 report of the British Columbia Expert Panel on Basic Income took up many of these ideas.

Read more:
Canadians should be able to access dental care with a health card instead of a credit card


The federal government’s September 2020 throne speech acknowledged these blueprints with its promise of a Disability Inclusion Plan, including a benefit that would improve upon existing provincial social assistance.

It also promised expanded public investment in housing and a national pharmacare plan. These are not new promises, and they were largely forgotten in the recent 2021 federal budget. It is an open question whether the CERB experience can sustain political momentum for renewing income security measures.