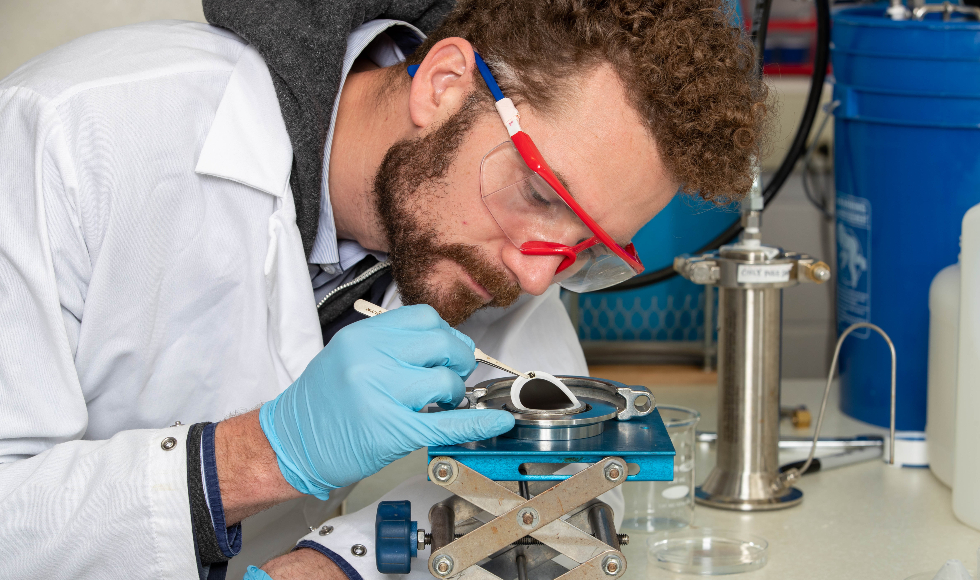 When he got to Duke University’s Center for the Environmental Implications of Nanotechnology (CEINT), de Lannoy — now an assistant professor in McMaster’s department of chemical engineering – had a bachelor’s degree in physics with honours, but no formal training in engineering.

“I was a bit of a fish out of water,” he laughs. “I had the mathematical skills, and I could figure out the technical details, but I didn’t have any of the lingo, any of the jargon. In physics I had never learned what the Reynolds number was.” (FYI: It’s a quantity in fluid dynamics used to predict flow patterns, and engineers use it all the time.)

de Lannoy had chosen to go into engineering because, while he found physics fascinating, the problems he worked on as an undergraduate didn’t seem to have sufficient relevance to the global challenges in the real world.

What he really wanted to do, he realized, was put his skills to practical use to help the environment.

And now – after his PhD at Duke, a postdoctoral fellowship at Stanford and work in industry – his lab at McMaster does exactly that.

de Lannoy works with nanomaterials: Composed of familiar elements, like silver and iron, nanomaterials have very different properties than their macroscale equivalents because the surface area-to-volume ratio goes up as a particle gets smaller – and more exposed surface area means a whole range of interesting changes.

That means something like nanosilver – which is smaller than a bacterium – isn’t shiny and silver-coloured. It’s often yellow, and has antibacterial properties because of the silver ions it releases. It has different electrical and optical properties as well.

Nano-zero-valent iron (nZVI), meanwhile, can be an environmental sniper in water and soils. As it rusts, it releases electrons that then attack harmful compounds that contaminate water, knocking off the elements that make the compounds dangerous in the first place.

Nanomaterials can be used for a number of environmental applications, and de Lannoy’s lab primarily works on remediation – using nanoparticles to address contamination in water or soil, for example – and separations – using  nanoparticles to create advanced membranes.

One project they’re working on is a Global Water Futures initiative led by McMaster Indigenous studies associate professor Dawn Martin-Hill. They’re part of an interdisciplinary group of McMaster researchers co-developing solutions to the ongoing issue of water quality on reserves with Six Nations of the Grand River .

Along with analyzing the contaminants in the water, de Lannoy and his team are working to develop nanocomposite membranes that not only filter water, but also resist getting clogged with biofilms, bacteria and other foulants – the gunk that builds up on the surface of the membrane as it filters water.

And because the membranes are also electrically conductive, an exciting ongoing focus of the research is to augment these membranes by developing them into sensors. These membrane sensors will track what kind of material is accumulating on their surface over time, which can potentially also provide information about the quality of the water they are filtering.

“If we can incorporate sensors into a membrane– one that can resist fouling and sit for a long time in the environment without degrading – and simultaneously detect what’s happening in the water, we can obtain real-time continuous measurements over a long period of time, without the need to clean and maintain the sensor,” explains de Lannoy.

Another project with Global Water Futures – this one led by ecohydrologist and McMaster professor Michael Waddington – deals with soil, rather than water. de Lannoy and his team are looking at why, following a forest fire, soil becomes virtually impermeable to water, preventing the regrowth of trees and other plants, increasing erosion and runoff, and potentially leading to dangerous mud- and landslides.

With climate change causing more frequent and intense forest fires each year, understanding and addressing these effects has become a matter of urgency.

“If we’ve already damaged the environment so much that forest fires are becoming more extreme, or last for longer, or happen more frequently, perhaps we can modify the soils, at least locally, so they retain water longer, to re-encourage growth. Perhaps we can modify soils with bio-based polymers, surfactants, or wetting agents to help them resist the impacts of extreme fires.”

And simply using nanomaterials isn’t enough. Guided by his graduate studies, much of his work is also focused on ensuring that nanoparticles don’t have adverse long-term consequences – highly effective for one application, but with devastating long-term effects.

For de Lannoy, whose research is at least partly focused on finding ways to mitigate the effects of climate change, technology is a large part of how the world will weather the inevitable environmental challenges – but it’s not the only answer.

“Technology will be a big component in helping us brace for the massive change that will eventually hit us, but without dramatic change to the way we interact with the environment, technology can only go so far,” he says.

“Technology and attitude change have to go hand-in-hand.”

And that’s where engineering, and teaching, come in. For de Lannoy, university isn’t just a place for students to learn skills and eventually find good jobs: it’s a place to learn about humanity, and how eventually to benefit humanity in some way.

When McMaster researchers hosted their Global Water Futures colleagues for the team’s annual operations meeting last week, they were joined by an unlikely guest – . . .