The people have spoken. And this man is listening 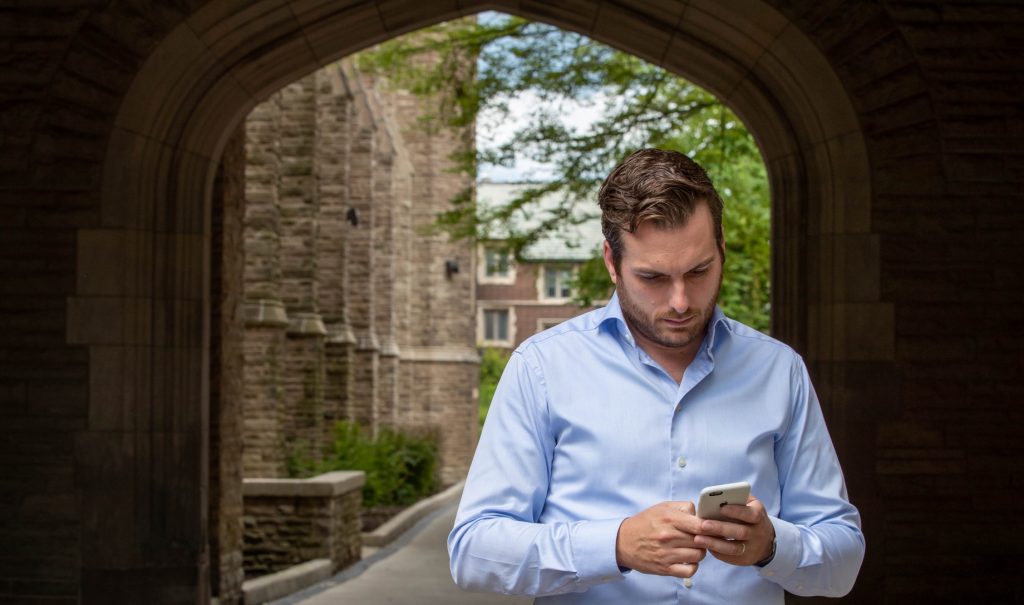 Do you know how young people of colour in urban centres in Atlantic Canada feel about carbon emissions or the budget deficit? Clifton van der Linden does.

Van der Linden, an assistant professor of political science, is the founder and CEO of Vox Pop Labs and the creator of its hugely successful Vote Compass tool.

How successful? In the six weeks leading up the federal election in October, 1.94 million Canadians used Vote Compass. In the spring, 1.6 million Australian voters used the voter engagement and education tool, as did millions of people across the United States, France, Germany, Brazil and New Zealand.

THREAD: Some preliminary insights into the dynamics of #elxn43 as observed from the 1.9 million responses to @VoteCompass.

The data are weighted to control for selection bias and thus permit representative inferences as to the population of Canadian voters.#cdnpoli [1/12]

Van der Linden’s work with Vote Compass and other digital democracy initiatives ties in closely with his teaching and his research on the implications of new technologies for the practice of politics.

In fact, he has developed a course that deals largely with new and emergent digital technologies and their role in politics.

“Vox Pop Labs is finding new ways to use digital technology to promote civic engagement and democratic participation,” he says. “And my academic work allows me to draw on the breadth and depth of that data to offer more refined analysis of public opinion.

“We’re trying to provide a greater voice to citizens in democratic countries, and hopefully prompt more responsive governance as a result. My hope is that our work contributes to deliberative democracy.”

On the impact of his work

I like the idea that the scholarship and research I’m engaged in is having an impact on the practice of democracy: Millions of people use Vote Compass in elections all over the world. It creates a lot of opportunities to better represent public opinion and improve political representation.:

On the shift from traditional polling data

We have massive data sets containing millions of respondents, which allows us to understand political dynamics and represent public opinion in new ways, compared to traditional polls, which often use a sample size of around 1,000 people.

We can use the statistical power of these samples to understand public attitudes at more granular levels: With a sample size of 1,000 randomly selected people, you’re lucky if you have a couple of dozen people from Atlantic Canada. That’s a very small representation of the population of that region.

With our data, with millions of people participating, we have tens of thousands or hundreds of thousands of people from each province, and it gives us the ability to not only represent people at a regional level, but to create richer intersectional representation.

And you can look at even more granular information: What do young Indigenous men in urban centres think of certain public policy issues? You can’t capture that with conventional polling data, so their voices become indistinguishable from the general population, even though they have unique perspectives that ought to be centred in the public discourse.

On biases in polling data

We have to come to a practical realization and a consensus that, given the changing landscape of information communications technology, we have to think about new ways to represent public opinion within a given population.

Any pollster’s data is skewed because there’s no such thing as a random sample: There is no longer a ubiquitous communications device like the landline and people who are reachable by pollsters increasing decline to take part in their surveys.

So we inverted the paradigm: Instead of going out and trying to find a mix of people that looks like the general population, we invite as many people into our sample as we can get and we get this massive sample. Then we post-stratify the sample instead.

Our data still has biases too, but we don’t shy away from the fact that our sample isn’t random.

With samples as large and diverse as those we generate, we have more people from every subset of the population than a conventional poll has in its entire sample.

This has huge implications in particular for equity-seeking groups that might be marginalized in conventional polls.

On the link between his research and Vox Pop Labs

Vox Pop Labs has provided a catalyst for my research in a few ways: One is to engage in scholarly inquiry on public opinion research on a scale that would otherwise never have been available to an academic.

It also provided an entry point into investigations into machine learning methods and AI, which is another focus of my research.

And it’s allowed me to have a lot of engagement on public policy. I’m very engaged with governments, the academic community and industry on the development of AI and where that development is going, as well as what the implications are for politics and society.

On the flip side, I know from my experience in industry that there are questions I can answer better in academia. When the profit motive is absent, you have a broader potential scope for research, and can see more clearly what new technologies can offer in terms of social opportunities and benefits, as well as potential harms.

There’s space here to really explore the rich possibilities of new technologies and to think critically about what their implications are for society.

On using AI for good

If we can understand how AI is being leveraged to manipulate mass opinion, to promote hate and extremism, and to cover up violations of human rights, we can potentially develop countermeasures that would undermine such efforts.

So it’s not only a research question to understand how these things are happening, though that is critical. It’s also a question of how we can leverage these technologies to defend ourselves against their more nefarious applications.

McMaster is willing to take innovative approaches that allow it to punch above its weight. There’s almost an entrepreneurial spirit here that I can relate to.

I worry that Canada is going to miss out on the returns on its investment in AI because we’re not focusing on the application of AI in addition to fundamental research.

For example, social scientists are trained to interpret the data being used to inform machine learning models and to interpret the results that these models produce. They think about these things in ways that STEM researchers are not necessarily trained to.

There’s a path to massively successful innovation in AI that runs right through the social sciences—one that Canada has yet to fully appreciate, let alone take advantage of.

We need to equip social scientists with a working knowledge of the mechanics of AI so that they can make substantive and constructive contributions in both social and economic terms—from innovative ideas that will ensure Canada’s competitiveness in the global digital economy to ensuring that AI does not undermine our democratic institutions or the underpinnings of the welfare state.

Mac offers students and faculty the kind of dynamic and innovative learning environment that fosters the thought leadership that Canada and the world will need to seize the opportunities and address the challenges that technologies like AI present.