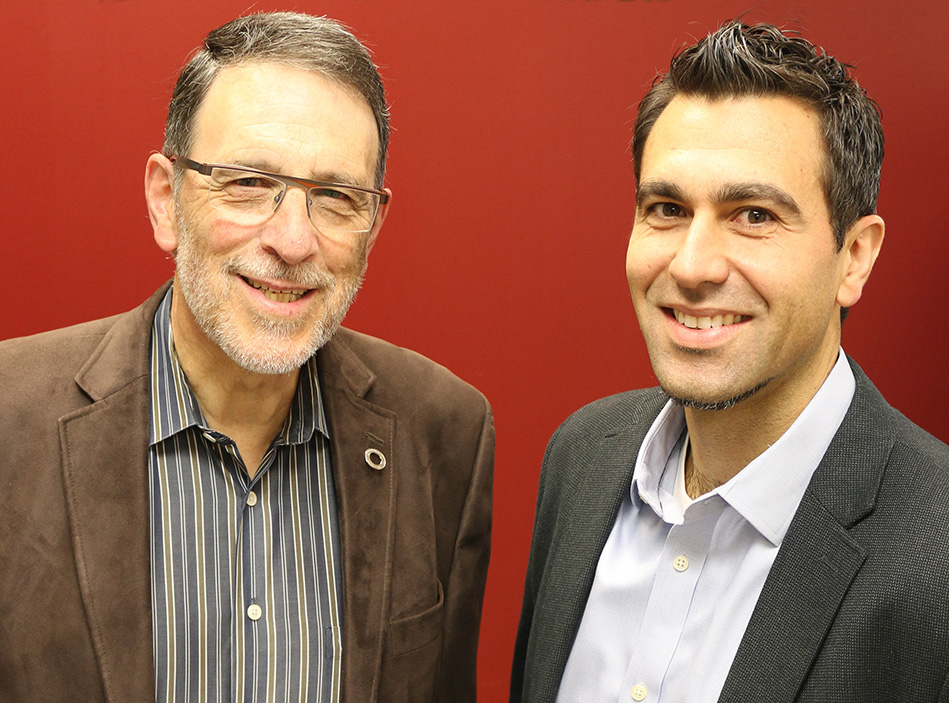 Peter Rosenbaum (left) and Briano Di Rezzo are authors of a system to describe levels of social communications among children with autism.

Children with autism have a wide range of ability to talk with other people, but it has been difficult to group children by their specific skills.

Now researchers at the CanChild Centre for Childhood Disability Research at McMaster University have developed an autism classification system that defines levels of social communications ability among those with autism spectrum disorder (ASD).

This new system will allow the child’s care team to understand and work to improve the child’s communication with others in everyday life.

“This is not a test, but more like describing the colours of a rainbow,” said Briano Di Rezze, a scientist with CanChild and the lead author for the paper published today by the international journal Developmental Medicine and Child Neurology.

“Currently we hear terms like ‘high-functioning’ or ‘low-functioning’ to describe children with ASD. However there is no common interpretation of what those terms mean, which makes them unreliable because clinicians, therapists, and parents aren’t using them in the same way,” said Di Rezze, who is also an assistant professor of occupational therapy at McMaster’s School of Rehabilitation Science.

The new system, called the Autism Classification System of Functioning: Social Communication or ACSF:SC, provides a standardized and simplified way for clinicians, therapists, teachers, and parents to talk about a child’s social communication abilities – from the standpoint of what the child can do rather than what they cannot.

Simplified, the people using the assessment tool for preschool children use ‘word pictures’ that describe five levels of social communication, and determine a child’s ability within two conditions: when they are performing at their best, known as their capacity, and what they usually do, known as their typical performance.

The work was funded by a grant from the Canadian Institutes of Health Research.

CanChild researchers and their colleagues in Sweden and the U.S. have created several functional classifications systems over the past 20 years. The first and best known of these classifications is the Gross Motor Function Classification System (GMFCS) for children with cerebral palsy, now used worldwide in more than 40 languages.

The new classification system has the potential to be as influential as the GMFCS, said Dr. Peter Rosenbaum, one of the original developers of the GMFCS, co-founder of CanChild and a professor of developmental pediatrics at McMaster’s Michael G. DeGroote School of Medicine.

“We hope that the ACSF:SC has the same transformative impact in the field of autism as the GMFCS has been reported to have in the field of cerebral palsy. Its applicability in communication with families, and in clinical services, research, and policy-making, will be very exciting.”

The tool with an attached User’s Guide will be available as a free for clinical practice, academic research, educational and personal uses download through the CanChild website at http://bit.ly/24XNSjH .