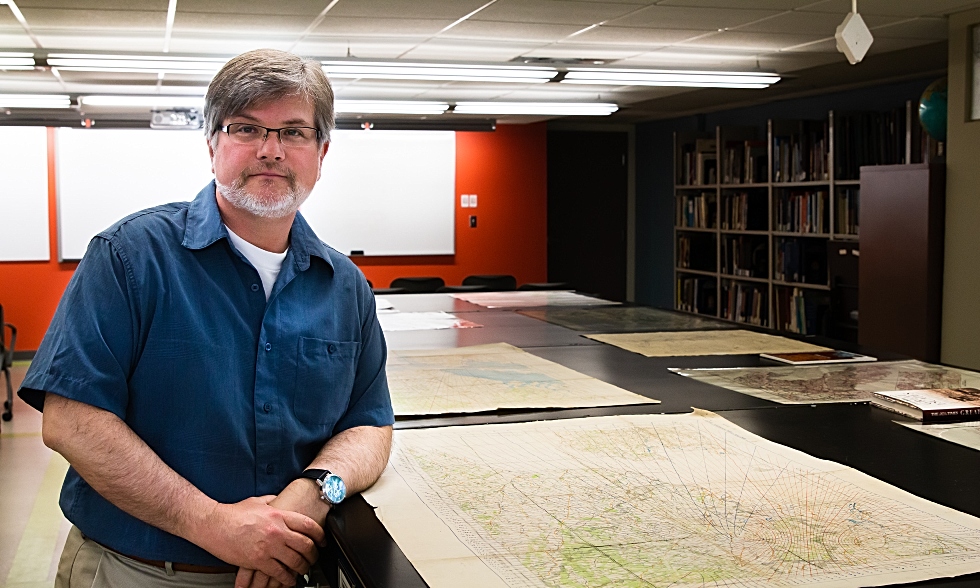 To commemorate the 75th anniversary of D-Day, McMaster’s map specialist, Gord Beck highlights some of the rare and unique items in McMaster’s extensive WWII map collection and explains how each map helps to shed light on different aspects of the war.

BY Gord Beck and Erica Balch

On June 6, 1944 – 75 years ago this week – nearly 150,000 Allied troops stormed the beaches of Normandy, marking the beginning of a bloody campaign that would eventually free Western Europe from the grip of Nazi occupation.

Operation Overlord, as it was known, was a massive undertaking. The largest sea invasion in history, it was two years in the making and required meticulous strategic and logistical planning, informed in large part by millions of maps – weapons of war in their own right – which proved to be critical to the success of the D-Day landings.

Some of these maps, and many others used by military planners and servicemen alike, are among those that can be found in McMaster University Library’s extensive collection of World War II maps, part of the Lloyd Reeds Maps Collection and the largest online collection of WWII maps in the world.

“Surveys of the English Channel floor opposite the landing beaches were necessary to determine where and when to launch the landing craft. Geology and topography maps were needed to identify the best locations to build temporary airfields and supply dumps. Night target and drop zone maps were needed for airborne troops, and lattice charts displaying hyperbolic radio waves were needed by aircrews to navigate their way to their targets in the dark,” he explains.

To commemorate the 75th anniversary of D-Day, Beck highlights some of the rare and unique WWII maps in the Library’s collection and explains how each item helps to shed light on different aspects of D-Day and the war: This, original, battle-worn map of Caen with hand annotated map coordinates jotted in the margins, was one of a new series of topographic maps created by the British for use in the Allied invasion of France. Caen was a major hub of communications and transport networks through which German troops and supplies were funnelled toward the Allies at the beach head. It was originally supposed to be captured on the first day of the invasion but was not taken by British and Canadians forces until “Operation Atlantic” a month later. For operations which involved co-operation between the ground and air forces, it was essential that both branches of the military use the same map. This helped facilitate planning, briefing and inter-communication, and ensured a common basis for referencing map coordinates. It was therefore necessary that the maps, like this original map from the period, contain all information needed by both parties, employing grids, symbols, and colour schemes which could easily be interpreted by all. Geology: Selecting the Site for the D-Day Invasion
http://digitalarchive.mcmaster.ca/islandora/object/macrepo%3A89271

Geology played as important a role as topography in the selection of the invasion area for ‘Operation Overlord.’ At least a dozen temporary airfields would be required to resupply the invasion. This geological map sheet covers the D-Day beach head near Caen and is a British wartime reproduction of a 19thcentury French original used to locate potential airfield sites.

Although the Pas de Calais was the shortest distance across the English Channel, the beaches of Normandy were less heavily defended with fewer cliffs and with a minimum of clay and depressions, making them better suited for the landing of troops and supplies. The landing sites were also close to the port of Cherbourg, a high value objective for the Allies which would alleviate some of the logistical problems of resupplying the invasion.

The Calvados plateau between Bayeux and Caen stands on a foundation of oolitic limestone of the ‘Bradfordian’ (Mid Jurassic) age which is depicted in yellow on the map, along with slightly older Caen limestone indicated in pink. This limestone base was ideal for the siting of airfields, as well as providing good, well-drained sites for the location of supply dumps. Materials for road repair and construction materials such as sands, gravels, and road metals (stone chips for use in tarmac) were also close at hand. This map is an example of what are commonly referred to as ‘silk’ escape maps. In reality, they were just as likely to be printed on man-made fabrics such as rayon or even tissue paper. These materials were chosen for their ability to be folded into very small sizes for concealment. All aircrew were supplied with such maps in case they were shot down. Many were smuggled into Prisoner of War (POW) camps, often through ingenious methods, to aid Allied prisoners in their escape attempts.

This map depicts northern Italy with an inset of the Swiss frontier. Due to the nature of the fabrics used, the ink on these double-sided maps often bled completely through to the reverse of the sheet, making it very difficult for the escapers to decipher the detail. This map was printed on rayon, and is based on native, Italian mapping. It was published in a print run of 5,000 copies on January 7, 1942. While the fighting in Ortona, Italy is regarded as the most famous example of Canadian urban warfare, in April 1945, a much larger battle was fought in the streets of Groningen, in the northern Netherlands.  Beginning on Friday, April 13, it was the first major battle fought by 2nd Canadian Division in northeast Holland.

The heaviest fighting took place around the central market square (see arrow on map), where the Germans had fortified the houses along the north side. The German garrison commander surrendered at noon on April 16th. The next day, the last holdouts laid down their weapons and joined their comrades as prisoners, totalling 95 officers and 5,117 other ranks.

The 2nd Canadian Division suffered 43 fatalities and another 166 wounded, 110 civilians had were fatally caught in the crossfire. This was a high price to pay at this late stage of the war. However, despite the civilian casualties and the destruction of 270 buildings—many of which were of symbolic and historical importance—the citizens of Groningen eventually celebrated their liberation. This item is a reproduction of an atlas found among Hermann Goering’s papers in Berchtesgaden in 1945 and brought to the Seventh U.S. Army Document Center in Heidelberg.

The original atlas was hand-coloured and classified by the Germans as “Top Secret.”It consists of thirty-three maps, outlining the raw material resources and industrial plants of primary importance to the German war effort. The maps were prepared in the spring of 1944 for the Reichsmarschall, Hermann Goering, on the basis of information available for 1942 and 1943. The atlas is divided into five sections: Greater Germany (15 maps); the occupied countries in the West (8 maps); Denmark and Norway (3 maps); the occupied territories in the East (3 maps); Serbia and Greece (4 maps).

This page shows the location of armour plate tank assembly plants and arms factories in “Greater”Germany. This bomber chart illustrates the use of ‘Gee’ radio navigation, an innovation that was first introduced in 1942. Before radio navigation, roughly three out of every 100 bombs fell within five miles of their intended targets. Gee navigation, measuredthe time delay between two radio signals, and allowed a navigator to fix his position at the interception of hyperbolic lines on a lattice chart. It dramatically improved accuracy – particularly during nighttime bombing missions – with bombs now landing within a few hundred metres of their target.

This map is from the archive of Gordon Griffith(1914-2000), who enlisted in the Royal Canadian Air Force in May of 1942. He served as the navigator of a bomber crew which formed in early 1944 and was attached to the 76th Squadron of the Royal Air Force which operated from an airfield located near the village of Holme-on-Spaudling in Yorkshire, England.

Griffith’s archive, housed in McMaster’s William Ready Division of Archives and Research Collections, consists of approximately 50 charts that were used on his bombing missions. They range from radar plotting and lattice charts to topographic maps. Issued by the Canadian YMCA, these small pocket-sized guides were designed to help Canadian troops on leave in London. Complete with a small fold-out map of central London, the guide provided advice on everything from finding accommodations, to information on Canadian social clubs such at the Beaver Club in Trafalgar Square where servicemen could, among other things, read newspapers from home and meet up with other Canadians. Restaurant recommendations, safety tips to be observed during the nightly blackout, and advice on how to avoid would-be thieves were among the helpful hints included in the guide.