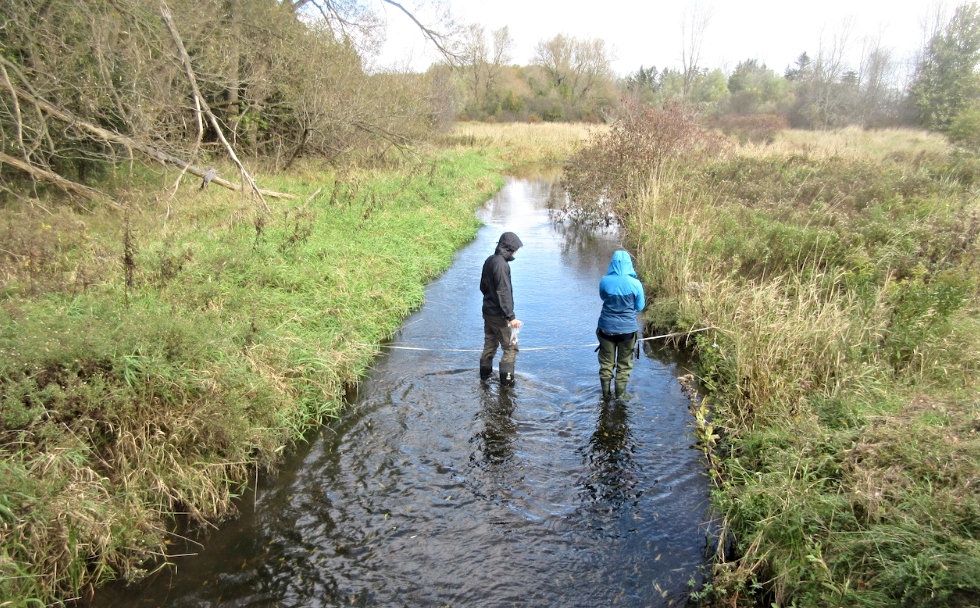 McMaster graduate students monitor the water in Spencer Creek which runs adjacent to McMaster’s campus and flows into Cootes Paradise. This is just one of the many community-based projects undertaken by researchers in the Faculty of Science with funding from the RBC Blue Water Foundation.

Harnessing the power of citizen science to track the local impacts of climate change. Working with Indigenous communities to monitor water quality in the Bruce Peninsula. Using documentary footage to help tell the research story of the Parry Sound 33 wildfire.

These are just some of the innovative, community-based projects undertaken over the past decade by researchers in McMaster’s Faculty of Science that are raising public awareness of the critical importance of water resources to local economies and ecosystems.

Funded by the RBC Blue Water Foundation and led by internationally recognized researchers and post-doctoral fellows in collaboration with community partners, these projects and others like them, have introduced community members to hands-on environmental science monitoring, educated the public about the effects of climate change, provided undergraduate and graduate students with valuable learning opportunities, and have resulted in the collection of unique local data that has influenced water stewardship policies in the Hamilton region and beyond.

“We are grateful to the RBC Blue Water Foundation for its support of community-based research and for helping our faculty advance scientific discovery and knowledge while promoting scientific literacy in our communities,” says Maureen MacDonald, dean of the Faculty of Science.

“We are Canada’s most research-intensive university but the thing that’s most unique about McMaster is how we do research,” continues MacDonald. “This integrated approach between undergraduate and graduate students, faculty members and post-docs in partnership with community is really unique and these projects represent some of the best examples of that.”

Learn more about some of McMaster’s Blue Water Foundation-funded projects:

Lead: Michael Waddington, professor in the School of Geography and Earth Science and Canada Tier 1 Canada Research Chair in Echohydrology

Focusing on water research, water stewardship and community outreach, iWetlands is made up of a network of both automated and crowdsourcing wetland water level monitoring stations throughout the Georgian Bay Biosphere Reserve (GBBR) on Eastern Georgian Bay, the world’s largest freshwater archipelago.

Working with local provincial parks and with First Nations communities, the team has placed several dozen monitoring stations across the GBBR, receiving nearly 500 texts from more than 400 unique phone numbers in 2019 alone and conducting outreach events to raise awareness of wetland ecosystems, species at risk and the iWetland citizen science initiative. The team also installed a weather station in the Magnetawan First Nation, training MFN staff to operate the equipment.

So far, data collection efforts have helped improve understand of the timing and magnitude of water level fluctuations in the wetlands which is critical for determining habitat suitability for reptile species at risk. The team is also working to increase community knowledge in order to support the development of restoration, reclamation and adaptation strategies.

What's in the water?

Using the Cootes Paradise Marsh – a 600-hectare coastal marshland located at the western edge of Hamilton Harbour – as a living laboratory, the project explores the impacts of wastewater on the behaviour and physiology of both native and invasive aquatic species.

Since 2015, the group has undertaken several studies that have revealed significant impacts of wastewater effluent and contaminants on aquatic life in Cootes Paradise Marsh and have hosted information sessions in partnership with the Royal Botanical Gardens to increase public knowledge of water quality and raise awareness of the team’s research findings.

As well, the team’s laboratory studies showed that wastewater created low-oxygen conditions in the water that impaired the physiological responses of the fish living in the Marsh.

In June of 2019, the project team was invited by the Bagida’waad Alliance from The Chippewas of Naswash Unceded First Nation, located in the Bruce Peninsula, to teach community members simple techniques for monitoring water quality in the streams feeding into Georgian Bay. Community members were concerned about changes in the fish population, an important source of food for the community.

Working with landowners, community groups and community centres, volunteers travelled to local streams throughout the Grand River Watershed (GRW) and collected, filtered, and processed water samples using techniques developed by the URBAN Program, successfully coordinating the time-sensitive collection and processing of these data across this large watershed, something never done before by agencies, universities, or organizations.

The phosphorus concentrations measured by volunteers were similar to those measured by researchers, indicating that community volunteers can be effective in helping to track changes in dissolved phosphorus across the GRW and could help provide important data to better understand the link between phosphorus and algal blooms in Lake Erie.

Paddle to the Fire

This initiative aims to conduct research on the impact and recovery of the 2018 Sound 33 wildfire that burned over 11,000 ha of the Eastern Georgian Bay and French River Provincial Park landscape. In 2019, funding from the RBC Blue Water Foundation helped to support a paddling expedition to the burned area, which can only be accessed after several hours of non-mechanized boat use.

Highlights of the research include public presentations at the Ojibway Club at Grundy Lake Provincial Park and Key River Lodge, and training on wildfire research with some Magnetawan First Nation staff. Through connections with local cottage associations, the team also initiated a “wilderness citizen scientist” program which invites individuals to conduct repeat photography at burned locations within the area affected by the fire.

As well, the team filmed several hours of footage during the research expedition, which is being edited into a short documentary, and will be part of wildfire exhibit starting in 2020 at Science North in Sudbury.

Spencer Creek Watershed, an historical and cultural waterway in the Hamilton region, runs adjacent to McMaster’s campus and is the largest contributor of water to Cootes Paradise. Made up of wetlands forests, agriculture, industry and urban areas, over the past 150 years, Spencer Creek has undergone dramatic change in terms of climate, land use and water course. This has led to urgent concerns about how land use and land management decisions are affecting the rate, timing, water flow, and water quality within the streams and tributaries that flow into Cootes Paradise.

Over the past four years, the team has been monitoring and collecting data to better understand how land use decisions are impacting the Spencer Creek Watershed, and how run-off from its steams and tributaries is affecting lake health, biological ecosystems (such as fish habitat) as well as drinking water quality in Cootes Paradise, Hamilton Harbour and, ultimately, the Great Lakes.

Data collection activities have provided students in the School of Geography and Earth Sciences with an opportunity to gain valuable hydrological training. Also, these long-term datasets can be used across undergraduate and graduate curriculum and can help address scientific questions of interest to local stakeholders.

Lead: Altaf Arain, professor in the School of Geography and Earth Sciences and director of the McMaster Centre for Climate Change

In 2010, funding from RBC helped to establish the McMaster Centre for Climate Change. Since then, the Centre has become an active part of the Hamilton community, bringing together community groups, McMaster researchers from all Faculties, as well as high school and university students alike to develop new ways to tackle climate change.

As part of its activities, the Centre runs the McMaster Weather Station which has created a local, longitudinal dataset for teaching, research and community outreach activities, as well as a high school weather network which provides local students with the opportunity to collect real weather data that can be used as part of their science curriculum.

The Centre also hosts annual public lectures featuring leading public figures such as former mayor of Toronto and former president and CEO of World Wildlife Fund Canada David Miller. The Centre was also  involved in establishing the Ontario Regional Climate Consortium, and is a partner in the Bay Area Climate Change Office.