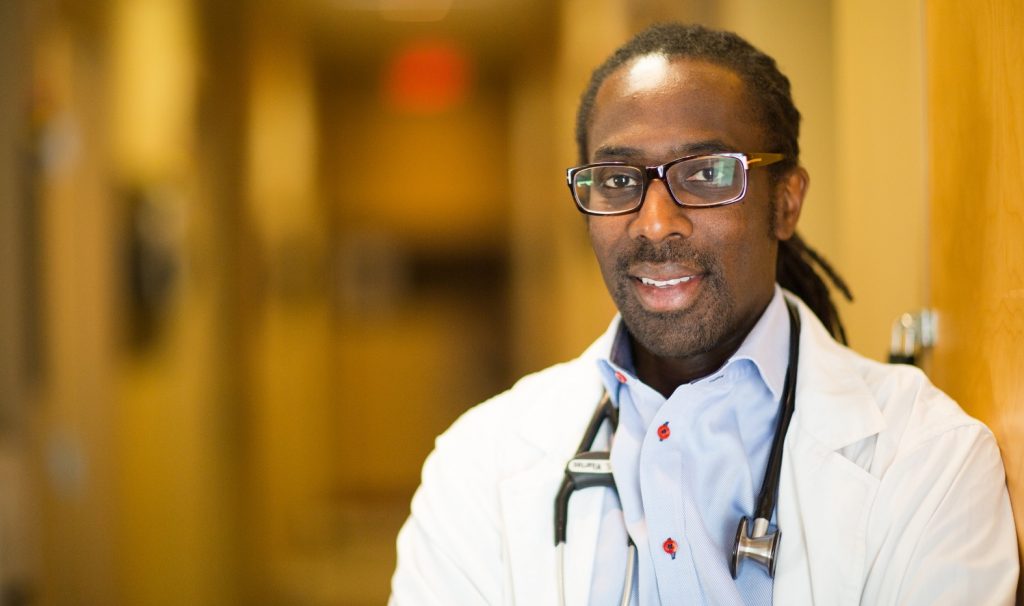 Sean Wharton from the Faculty of Health Sciences is one of the two lead authors of comprehensive new guidelines for doctors to follow when treating patients with obesity. (Photo courtesy of Sean Wharton)

A McMaster physician has co-written a comprehensive new set of guidelines for doctors to follow when treating patients with obesity, marking a dramatic shift from existing practices.

Sean Wharton, one of the two lead authors of the new clinical practice guidelines that Obesity Canada and the Canadian Association of Bariatric Physicians and Surgeons published in the Canadian Medical Association Journal, is an adjunct professor of internal medicine in the Faculty of Health Sciences.

The guidelines, created by more than 60 researchers, scientists, physicians, advocates and others from across Canada, are garnering global attention for recommending that physicians treat obesity as a chronic disease — that is, with medication, surgery or psychological therapies.

They also begin by tackling the issue of weight bias, and include sections on treating Indigenous patients with obesity, living with obesity and moving away from the notion of a caloric reduction, or diets, which create more problems than they solve.

Another first: the guidelines are largely shaped by patient input.

Here’s Wharton on the new guidelines:

It’s only been about 10 years since we first brought patient voice into our work, and the concept is still new in most internal medicine fields. But it’s a necessity for us in the field of obesity management, and we can’t imagine working without it.

When we first started involving patients in our conferences, they would say, ‘That’s not correct; that’s not how I feel, not how I want to be treated, and not what I want to hear.’ That’s when we started to recognize that we were missing something.

We work in obesity management, both in our research and clinically, yet our biases were so steep and so intense that we didn’t even see them until we involved patients.

And the patients have helped us to recognize our biases, and how to change them. For instance, the first step in all in in our guidelines is to ask patients if it’s OK to talk about their weight, and that came from the patients themselves.

Read more:  Obesity is not defined by one’s weight or size, new guidelines say — The Globe and Mail

On respect for the patient

What happens with many patients is they have a stye on their eye, or something wrong with their throat, and the doctor looks at them and says, ‘Well, your obesity is a problem, and I’m going to talk about it.’ But the patient wants you to treat the bump on their eye.

If you can’t start a physician-patient dialogue the right way, what are the chances of you being able to actually treat their condition?

If you would like to address obesity, you can look at that in a compassionate and empathetic way, not a paternalistic way, where you’re blaming and shaming them and attributing everything that happens to obesity.

A toolkit for patients

There are eight million people in Canada living with obesity, probably about 20 million living with excessive weight and obesity. We can’t leave treatment to specialists. It has to be handled by primary-care doctors. These are credible, evidence-based guidelines created by academics across Canada, that will be delivered to every primary-care doctor.

Our hope is that they will adopt them, and part of it rests on the fact that these were written for patients. They can pick up this document and bring it in to their doctor and say, ‘I think this is important. This says there is effective treatment for my elevated weight and appropriate ways of addressing it.’

The bias that we have about people with elevated weight is so deep and so strong. It’s almost embarrassing how many physicians act on their bias about weight instead of drawing on the training they received in medical school.

Right now, if a doctor sees someone who weighs 250 lbs coming into their practice, they might think they are non-compliant, they have no willpower, they’re not an ideal patient who will listen to advice.

If I act on that bias, I’m going to be paternalistic. I’m going to tell them what to do, waving my finger, saying, ‘Try this diet. Try it again, work out harder, go to the gym more.’

That is the wrong thing to do, and it’s supported by zero medical evidence.

So the first thing is to recognize that you’ve got the bias and to try not to act on it. Instead, treat obesity as you treat other medical diseases — with appropriate, evidence-based treatment options, including surgery, medications and psychological intervention.

We recognized that we were not going to focus on caloric restriction. Instead, we would actually try to eliminate the word “diet.” It’s a loaded word that usually represents caloric restriction without any other appropriate interventions to stop the cascade of those negative hormones that drive weight back up.

We really dispense with this idea that you need to go on a 500-calorie deficit diet to get your weight down.

The pathology of obesity

Twenty years ago, most people would have said depression is not a chronic disease because we didn’t understand the pathology behind it. It’s the same with obesity. Show me that pathology generates elevated weight and the regaining of weight and we can start calling it a disease.

Now we have clear evidence that there’s a pathological basis that exists within the brain’s neurochemistry and hormones that drives elevated weight — similar to the way neurochemical changes drive schizophrenia, depression and Alzheimer’s.

Now that we understand that this is a disease and we know we can research ways to halt that cascade of negative neurochemicals and increase the positive chemicals, we can treat it.

Pharmacotherapy can make a big difference in life of someone trying hard to deal with elevated weight. Medications have failed us in world of weight management for 50 years — it’s only over the past 10 to 15 years that we’ve seen effective, safe meds, because we understand biological process better now.

GLP-1 is one of the most effective: It’s an endogenous hormone that we all produce, that signals when we feel full and stops us eating. People with obesity don’t have enough GLP-1, or don’t engage the signal properly.. Medication can increase the concentration of GLP-1, to tell the brain you’ve had enough and it’s time to use fat cells for energy.

Be part of the solution, not the problem

We are getting a lot of positive attention with these guidelines, but we also get some pushback from physicians, from patients and from online commenters. And that’s okay. It’s because they have never seen obesity addressed like this.

That’s the reason we have these guidelines and are saying it’s important — because there is a lack of understanding. We expect it to take time, but we expect people to start to understand what people living with obesity are going through. And their voices are going to appeal to doctors and policy makers to listen and to be part of the solution, not to be part of the problem.

Read more: In Canada, obesity will no longer be determined by weight alone— CNN