Donna Strickland reflects on engineering physics, McMaster and the whirlwind of winning a Nobel prize 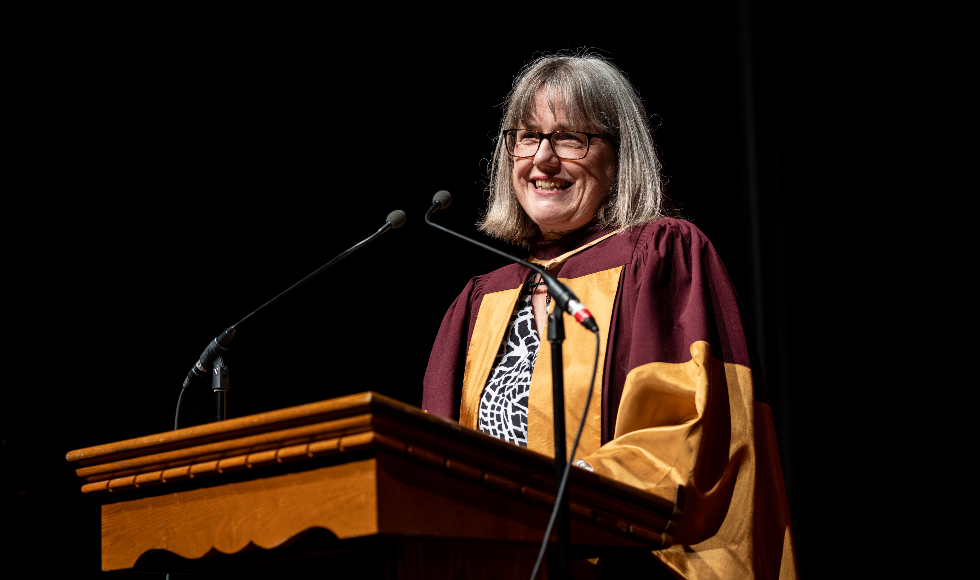 Donna Strickland at McMaster's Spring 2019 convocation, at which she received an honorary doctorate.

Scroll down to watch the livestream of Donna Strickland’s J.W. Hodgins Memorial Lecture.

Matter of fact and modest, Strickland considers herself as just one example of a success story. Good thing she likes success stories, with a side of luck.

It’s a story that started with a gut instinct to pursue an Engineering Physics degree at McMaster University based on its laser program and, most recently, earned her headlines around the world last October for sharing the Nobel Prize in Physics with her former PhD advisor, Gerard Mourou. Strickland’s win marked the third time a woman has received the award.

It’s at the University of Rochester’s Institute for Optics with Mourou where she would co-develop a laser technique called chirped pulse amplification, which would lead to ground-breaking and far-ranging applications from scientific, military, energy and medical, including laser eye surgery. Stretching, then amplifying and recompressing beams enabled the intensity of light to be boosted dramatically, leading to lasers that could cut with precision. Last spring, her PhD alma matter also honoured her with an honorary degree.

But calling her an inspiration?

“I do believe in giving back. I do believe in acknowledging that I got a leg up from (McMaster and Rochester). If can help in any way, I want to. I don’t do the inspired thing. I get people using the word inspiring a lot, right? But for me, it’s more about being an example of a success story for both universities,” Strickland says during a phone interview before receiving an honorary doctoral degree from McMaster University on June 14.

But it’s her undergraduate days at McMaster that inspired her love of lasers and where she became better acquainted by working in an optics lab during her summers, and where she took courses on lasers and electro-optics in her upper years.

Engineering Physics and Strickland were the right fit.

“I thought that was the perfect program for me so I wouldn’t have to choose between physics and engineering,” she told the crowd during her convocation speech at FirstOntario Concert Hall in Hamilton. “Then I read that part of the program was about lasers.  I thought ‘How cool does that sound?’ and somehow I just knew that was the program for me. So, I would say I started down my career path in laser science here at McMaster University in the Engineering Physics program. I absolutely loved the program.”

After her time at McMaster, Strickland went on to work as a physicist at the Lawrence Livermore National Laboratory in California and as a member of technical staff at Princeton University.

In 1997, she joined the University of Waterloo, where she remains today, and started her ultrafast laser group, which develops high intensity laser systems for nonlinear optics investigations.

But it started at McMaster. It is here that Strickland danced during her first week at the institution while staying at Moulten Hall, a residence on campus, and found her lab partner in the process.

She remembers being marched into the quad and meeting a guy from Matthews Hall. They were told to dance by upper year students.

In class, she learned about lasers and electro-optics in her labs, leading her to become a self-described ‘laser jock’ — a title that is now inscribed on the back of a hockey jersey gifted to her by her Guelph elementary school after her Nobel win. Lasers brought together her intelligence with the chance to build something, she says. She’s devoted her entire academic life to it.

“I think light is one of those things that you actually get to see happen. A lot of research, you’re either just looking at what’s on the screen, or data, or what have you. But when you look at lasers they’re colorful, and they create new colours right in front of your eyes. I was a kid who liked to play with Legos. I’ve never gone the route of building huge lasers. I like small lasers that I can still put my hands on and play with like a toy.”

She did try to make a diode to emit laser light during her time at McMaster, but it didn’t work. What did she learn?

Luckily for Strickland, her career has been full of success stories since.

“I believe in enjoying every step of the path. I try to make the most of every step.”

But did she see a Nobel Prize on that path?

“No,” Strickland says full stop, and offers a throaty laugh.

The ride of winning such a prestigious award has been amazing, rewarding and exhausting, she says.

“My sister describes it to friends and family as ‘She’s somewhere between totally exhausted and being in total awe of her situation.’ And that pretty much sums it up.”

Since winning, Strickland has found herself spending more time giving talks around the world than doing science. But the prize has awarded her a unique platform.

“Science is important to society. I don’t (think) that we in North America give enough credit to how important science is to build a strong economy in this high-tech world. The parts of the world that are investing heavily in science are the ones moving the fastest forward. I’m a little afraid North America will be left behind if we don’t start understanding that.”

Our special J.W. Hodgins Memorial Lecture featuring Nobel Prize winner and McMaster Engineering Physics alumna Donna Strickland is sold out but you can still watch her talk live on Oct. 3 from 3:30 to 4:30 p.m.

You’ve got one of three ways to check it out:

The event will be broadcast live only.

It will not be recorded and will not be available following the event, as per McMaster’s agreement with Dr. Strickland.