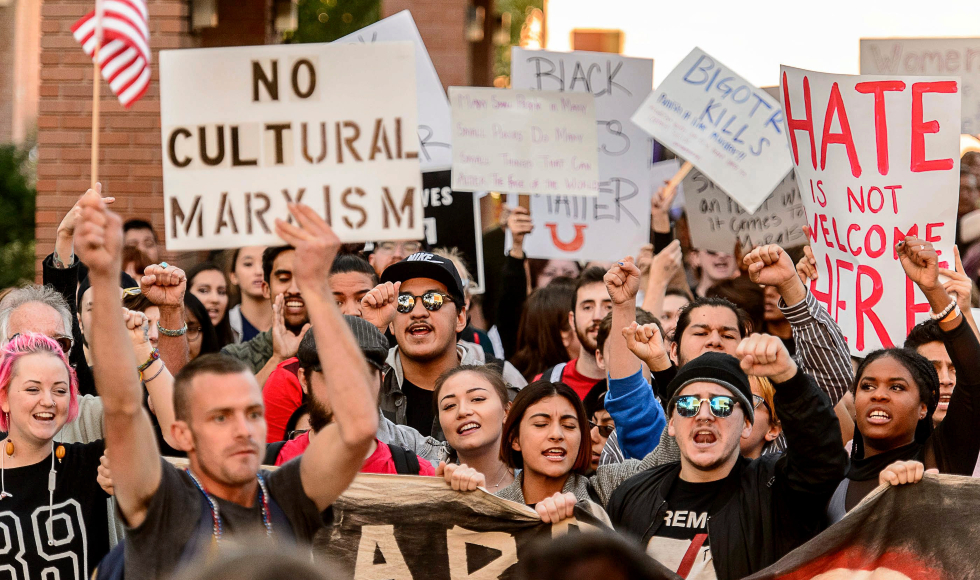 Protesters showed up at the University of Utah in 2017 during an appearance by Ben Shapiro, the former editor of the alt-right publication Breitbart. Photo by Rick Egan/The Salt Lake Tribune via AP.

BY Sigal Ben-Porath, University of Pennsylvania

The following is an edited excerpt from a talk to be given at the Magna Charta at McMaster University on Oct. 16, 2019.

Free speech, a staple of modern democracy, has become the focal point for political and cultural forces impacting the university. Universities thrive in an environment of open inquiry. But recent controversies in universities around the globe expose the difficulties of crafting a strong position on free speech in this polarized time.

Partly these controversies are a demonstration of the external pressures created by movements that test the limits of democratic tolerance, and partly they reflect changes in culture which affect the internal balance of power within the university.

Traditionally, higher education was dedicated to educating elites and preparing the next generation of political, religious and economic leaders.
In recent decades, however, universities around the globe opened their gates to include a growing number of students, many of whom belong to groups that were never previously considered admissible.

Women and those who belong to racialized and religious minority groups, along with those from all social classes, have dramatically changed the composition of students and staff. These newer members bring with them new types of knowledge, and they reasonably expect that admission affords them not only access to the institution as it is, but also the opportunity to contribute to the university’s structures, practices and epistemologies.

This new dynamic and the growing conundrum around free speech on campus is why I’m proposing a democratic framework for higher education which I call “inclusive freedom.” Inclusive freedom reflects the values of the university in protecting free thought, inquiry and expression, and in maintaining a commitment to the dignity of all students and faculty by allowing them to freely and equally contribute to this shared work.

In the vast majority of cases, in fact, an inclusive climate is one in which more people and more views are protected and expressed. Universities need to permit a wide range of speech content, within legal limits, so that they can protect the broadest possible range of views, perspectives and hypotheses in their effort to push the boundaries of knowledge.

But legal frameworks aren’t sufficient for guiding the university’s response to tensions around speech. Universities cannot carry out their contemporary missions if they abdicate responsibility to acknowledge and respond to the price that some pay for disparaging or biased free speech: the price is harmed dignity. It’s also living with the awareness that biased speech can breed further bias, in action or words, and can encourage illegal actions such hate speech or violence.

Responses to those diverse concerns can only be contextual and should take into account the history and social conditions of the specific institutions in which such issues are put forth.

In my work as chair of the Committee on Open Expression at the University of Pennsylvania, and in visits to dozen of campuses around the United States and Canada to help develop and implement open expression policies, I see the challenges that institutions face. I hear the concerns that students raise about the harms to their dignity caused by biased, racist or prejudiced speech. As a political philosopher who has studied the
social and educational effects of war I am aware of the perils faced by societies in conflict, but I also know the important role that educational institutions can play in restoring a sense of shared fate to civic life.

This means universities must take an active stance in support of all members’ equal dignity, so that all are able to contribute to a shared mission. It also implies investing resources to support historically marginalized groups so that they are effectively able to participate in the open inquiry that takes place on campus. Beyond taking public positions against claims based on bigotry or hatred, universities should represent their values by creating a campus where everyone’s dignity is recognized and respected, and where all voices are heard.

We must represent university institutions for what they are: among the most ardent protectors of open expression in democracies. And we must do so in ways that allow for all members to equally participate in the conversation on campus.