From the McMaster Nuclear Reactor to a cancer patient in Spain 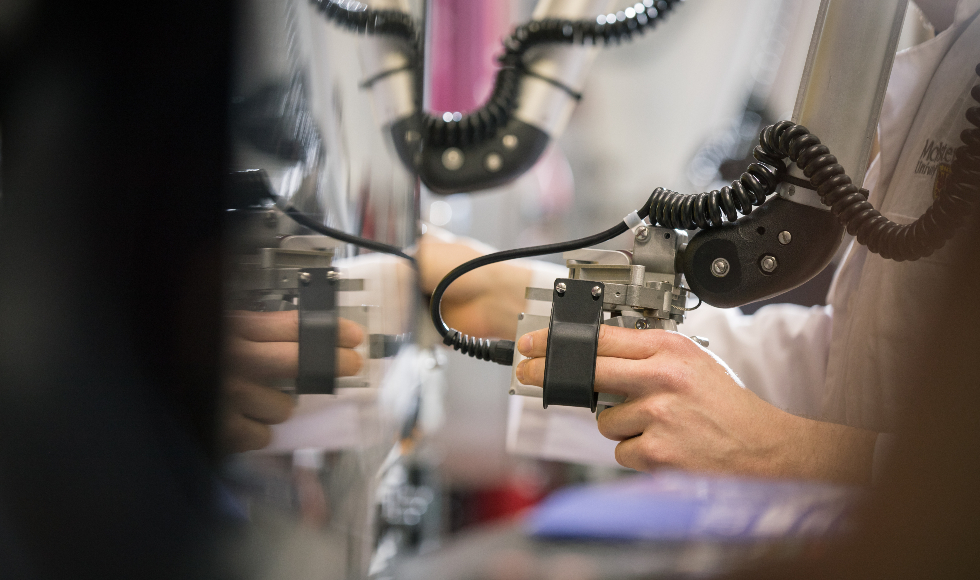 Several members of the team that manages and operates the McMaster Nuclear Reactor went to work hours earlier than usual on Tuesday (June 4) to complete a critical mission.

They were there at dawn to irradiate about half a teaspoon of tiny, almost invisible plastic balls, and to start the clock ticking on a complex and time-sensitive transatlantic journey that would ultimately see the material injected into a critically ill cancer patient in Spain about 48 hours later.

The balls, or microspheres, are specially engineered by a Dutch company, Quirem Medical, to treat liver cancer. Once irradiated, the manufacturer prepares them for injection and measures them into a dose specific to the patient, in this case a man in Barcelona.

The patient’s care team was standing by to inject them into a blood vessel that feeds the tumor on his liver. Using imaging technology, they would watch the treated spheres travel the ever-narrowing branches of arteries until they became lodged, choking the tumor of its blood supply, and bombarding it from within with their precisely calibrated radiation, whose effective range is about 2 ms.

The treatment is the state of the art in Europe and is to be tested soon for use in Canada and the US.

McMaster, now validated as a supplier and placed centrally within North America, is well-positioned to meet what is a growing need for the treatment, as Baby Boomers pass through the window of highest risk for the hard-to-treat cancer.

“We’ll be right at the starting line. We’ll be well positioned to be one of the key global suppliers for this medicine,” says Chris Heysel, McMaster’s Director of Nuclear Operations and Facilities.

“This is a big moment for the team.”

A medical mission two years in the making

This particular mission, the first between McMaster and Quirem, was about two years in the making.

Here on campus, Andrea Armstrong, a research scientist at the reactor, had read about the treatment and wondered if the reactor might be able to make it part of the portfolio of materials it produces for nuclear treatments and diagnostic tools.

Not long after Armstrong completed her study of Quirem’s new treatment, the manufacturer came looking for McMaster, in a happy coincidence that helped to smooth the process of the two parties coming together.

While there are numerous nuclear reactors in Europe, there are only two validated to provide the specific form of isotope required for the treatment. The McMaster Nuclear Reactor proved to be the next-closest backup.

Having a steady, reliable supply of irradiated microspheres is vital to providing the treatment, and after tests to verify that the MNR could do the work, the McMaster team was ready to be called into action, with word coming just days before the shipment was to be produced.

Once the material had been irradiated here – a delicate process that takes about four hours – the team moved quickly and methodically to get it on the road, knowing that a sick patient and care team were waiting on the other end.

The radiation applied to the material has a half-life of 27 hours, meaning it loses half its strength every 27 hours.

The decay is factored into the final dose, but the loss of strength does not permit delays in the complex logistical process of transporting the material to Europe, all of it thickly layered with regulatory paperwork.

“I sure know a lot more now than I did before about logistics and customs,” jokes Armstrong, who oversaw the project.

A high-speed race against time

The McMaster team packed the dose in a highly secure container about the size of a water pitcher, designed to withstand many forms of potential harm. A specially certified driver transported the package to Pearson International Airport and placed it in the hands of a similarly qualified handler for placement on the flight to Schipol Airport in Amsterdam, where a customs broker was waiting to receive the shipment.

From there, the material was moved to Quirem’s facilities for processing and ultimately to Barcelona, where it was successfully administered Thursday morning, completing a process that had started here on campus two days earlier, just as most staff, faculty and students were rising from bed.