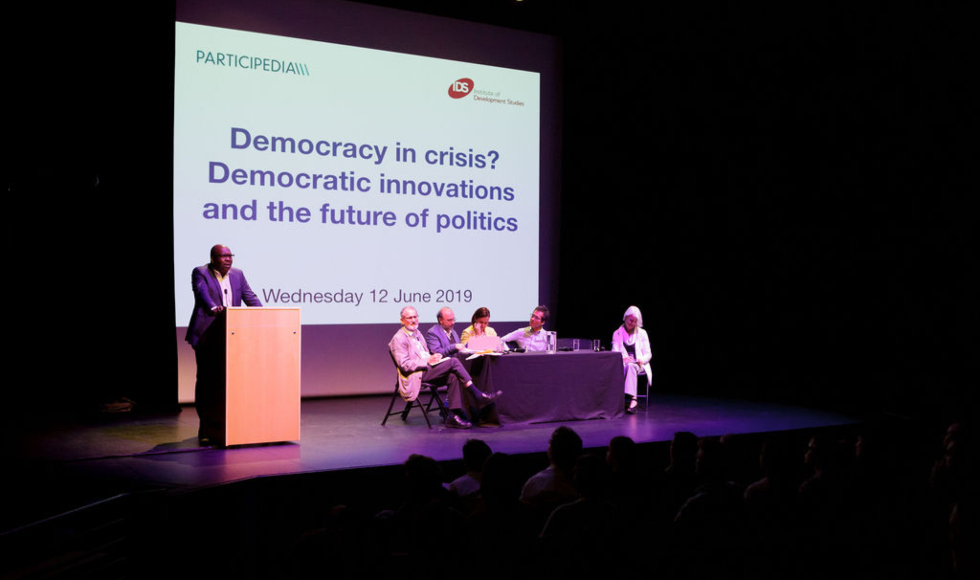 Participedia, a global resource for participatory democracy housed in McMaster’s Faculty of Humanities, has received a $2.5 million Partnership grant from the Social Sciences and Humanities Research Council (SSHRC) to expand its reach and impact.

The project, which was founded in 2015 at the University of British Columbia, is an international network of researchers, educators, practitioners and policymakers who use an open-access crowdsourcing platform, similar to Wikipedia, to share research and information about democratic initiatives around the world.

Housed within McMaster’s Centre for Human Rights and Restorative Justice and led by principal investigator Bonny Ibhawoh, Participedia is the largest database of its kind, comprising 63 researchers from 22 universities and 21 organizations across 12 countries. This includes five co-investigators at McMaster within the Faculty of Humanities and the Faculty of Social Sciences:

“Democracy is under threat in many parts of the world – in both developing and developed countries – with crises such as the COVID-19 pandemic and climate change threatening to further destabilize people and political systems,” explains Ibhawoh, who is the Senator William McMaster Chair in Global Human Rights. “At the same time, governments and organizations around the world have been organizing and responding to these threats. Through our global network of contributors, Participedia is documenting and mapping what exists and what is working.”

During Phase 1 of the project, which also received a $2.5 million grant from SSHRC, contributors compiled more than 1,600 cases and 330 methods of participatory democracy around the world, including citizens’ assemblies, e-democracy and labour organizing.

Working with funding from SSHRC and other sources, Phase 2 of Participedia will build on the work of the past five years, expanding the project’s network to five new areas:

In particular, the next phase of work will focus on the challenges of democracy in the Global South, which refers broadly to the regions of Latin America, Asia, Africa and Oceania. Researchers and contributors will also address how non-Western democratic innovations are documented and analyzed by researchers.

“In many cases, people have been innovating for decades, but there are longstanding inequities in how their work is understood by Western researchers” says Ibhawoh. “As well, we want to document civic engagement even in places that aren’t traditional democracies – our primary interest is citizens and their investment in their government.”

Ibhawoh, who chairs the United Nations Expert Mechanism on the Right to Development, points out that while global political turmoil may make headlines, Participedia’s work shows that plenty is being done to counteract the spread of authoritarianism and populist nationalism – and provides resources for those who want to continue that work around the world.

“Ordinary people working at the grassroots are innovating and organizing out of the global spotlight,” he says. “Initiatives across the world that Participedia has highlighted, like participatory budgeting, citizen activism, and new ways of integrating Indigenous law and practices into the governance of settler-colonial states, show us that democracy is being defended in countless creative ways. It is up to us to make sure their efforts are shared as widely as possible.”