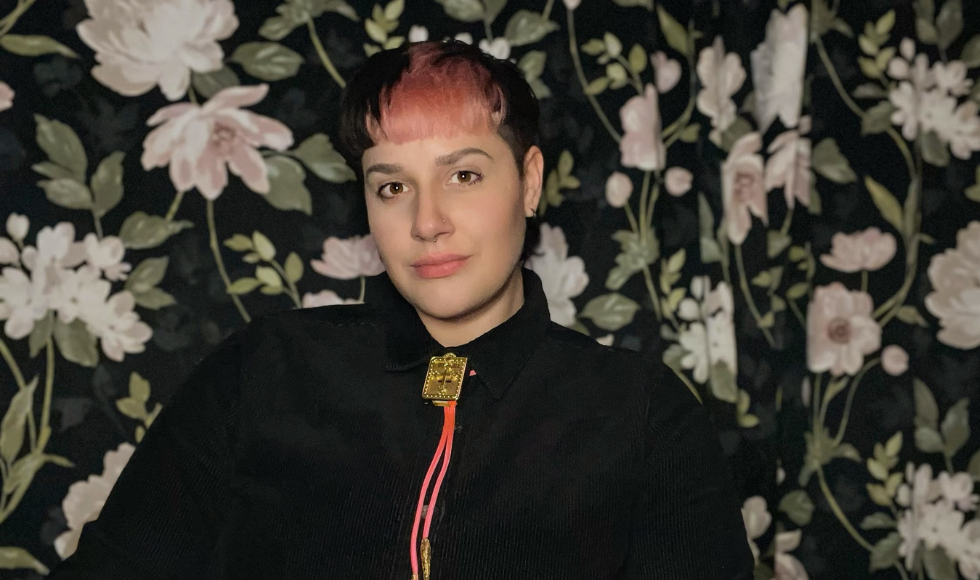 Kaci Switzer is exploring how 2SLGBTQ+ individuals were and are affected by their Christian upbringing, as well as the pathways to connection, resilience and healing. And they’re just getting started. (Photo courtesy of Kaci Switzer)

Growing up queer and Catholic in Alberta, Kaci Switzer was severely bullied for their identity.  So much so, in high school they had to change schools — and school boards.

A few years later, working in public education in Alberta, “I was witness to 2SLGBTQ+ students experiencing similar oppression and bullying that I had gone through,” Switzer says, “and I wanted to find a way to address it.”

Now an MA candidate in Gender and Social Justice at McMaster, Switzer is focusing their research on the ways in which queer and trans individuals were and continue to be affected by their Christian upbringing, and how some have found a variety of pathways to connection, resilience and healing.

Switzer recently received the prestigious Chair in Transgender Studies Visiting University-based Scholar Fellowship at the University of Victoria Transgender Archives, the largest archive of its kind in the world.

They are also the inaugural recipient of the Rainbow Bursary, a financial support for queer or trans graduate students at McMaster, created by grad Ray Brillinger and his partner, Cy Hack.

A focus on resilience and community

For their major research paper, tentatively titled Queer and Trans Futurity: Healing Christian Religious Trauma Through Community, Switzer is investigating the ways in which 2SLGBTQ+ individuals’ identities and lives have been impacted by their affiliation to Christianity.

“Was it positive or negative? I want to hear both sides,” Switzer says.

Their hope is to reframe the conversation about 2SLGBTQ+ oppression in Christianity, which often focuses on the church, leaving untold the stories of the people who lived through it.

“We often hear stories of how the church traumatized people and how they were told that they were ‘objectively disordered,’ which is the actual wording in the Catechism of the Catholic Church,” Switzer says.

“The church is blamed, as it should be, but we never talk about what happens after: What happens to people who went through that? Where do we end up?”

“That’s what I want to focus on — queer and trans resilience. Radical acts of love and community. The ways we hold ourselves and each other through these experiences and finding ourselves and growing up. And getting to live outside of this — whether that means staying connected to Christianity at all, or whether it’s completely dissolving from it.”

Switzer is conducting a qualitative study, for which they interviewed 13 2SLGBTQ+ individuals with a background in Christianity. Besides learning about participants’ experiences, they discuss ways in which queering Christianity might shift 2SLGBTQ+ connections to spirituality, and the ways in which 2SLGBTQ+ individuals and communities are engaging in healing practices to unlearn Christian religious trauma.

They are also creating a digital, free-access, community-centred zine that brings together their key findings, quotes from participants, excerpts from the literature review, and sections of their research at the Transgender Archives.

It’s important to Switzer that their research be freely and openly accessible to everyone, not only to academics.

“I hope that I can continue the work of scholars before me to dismantle the barriers of research done in academia by bringing my research directly from communities and then back into them,” they say.

The impact: A painful path to healing

When Switzer put out a call for participants for the study, they expected it would take a while to recruit the number they needed. But in 24 hours, they had more than triple that number, and the responses kept coming in.

“There is a huge need for people who have these experiences to be able to talk about them, to find community with people who share it,” they say.

For Switzer, who is trans, non-binary and queer, the experience has been “so hard and so beautiful at the same time.”

Like their study participants, they found it incredibly moving to finally encounter people who could relate to their experiences. “Of course I knew that others had these experiences, but to build community with others and situate myself in a space that is surrounded by so much love and healing, just in the fact that we survived beyond it, is so powerful,” Switzer says.

And in a video call world, that space extends around the globe. One of Switzer’s study participants is in Argentina and “I can get on this Zoom call and we can talk like we’ve been friends forever,” they say.

“We see ourselves in every other queer and trans person we meet. We can talk about our experiences as if we’re old friends. Building this community is happening already in these singular interviews with each person.”

The experience is both hard and healing, they say.

“I can’t say it’s not hard. Talking to people about their trauma, which triggers my own trauma, is incredibly difficult. I have had to learn to take care of myself. But it’s also healing for me. Some of my interviewees have said it’s healing for them, too.”

“I’m just so thankful for that. Even if nothing else came of this work, this small group of people coming to talk to me is enough.”

‘I don’t want to ever stop’

While such a sense of community may already exist, it’s hard to find, Switzer notes. “This is the first time we’ve found each other, and I don’t want to ever stop. I want to continue doing this.

“The MRP is a 25-page research paper, but it’s not enough,” Switzer says.

“The world is filled with millions of people with these experiences. I want to keep going and talking to people and hearing their stories, cataloguing their experiences, find a way to build a community.”

One of the hardest parts of this project, in fact, is that “I can’t do it all,” they admit ruefully. “I can’t talk to everybody that sent me a request. There’s not enough time yet, there’s not enough funding. I think every single one of their stories is so important I don’t want them to go unheard.  And so I want to find a way to get them heard. Even if it’s not in this project, it will be in a future one.”

The transition to grad school was a hard one for Switzer, who struggled with a lack of community in virtual school. And money was tight.

Receiving the bursary took so much of that pressure off, they say. “And it also felt like queer and trans people were finally being seen.”

“Being queer and/or trans, you are already significantly more statistically likely to experience poverty and be disadvantaged in many ways. To be able to see that we’re recognized and we need help, specifically because we’re experiencing intersections of oppression, was incredible. I was really thankful.”

Switzer encourages students who think they might qualify for the bursary to go for it. “It’s worth the time — just do it. It can literally change so much.”

Click here to learn more or donate to the Rainbow Bursary