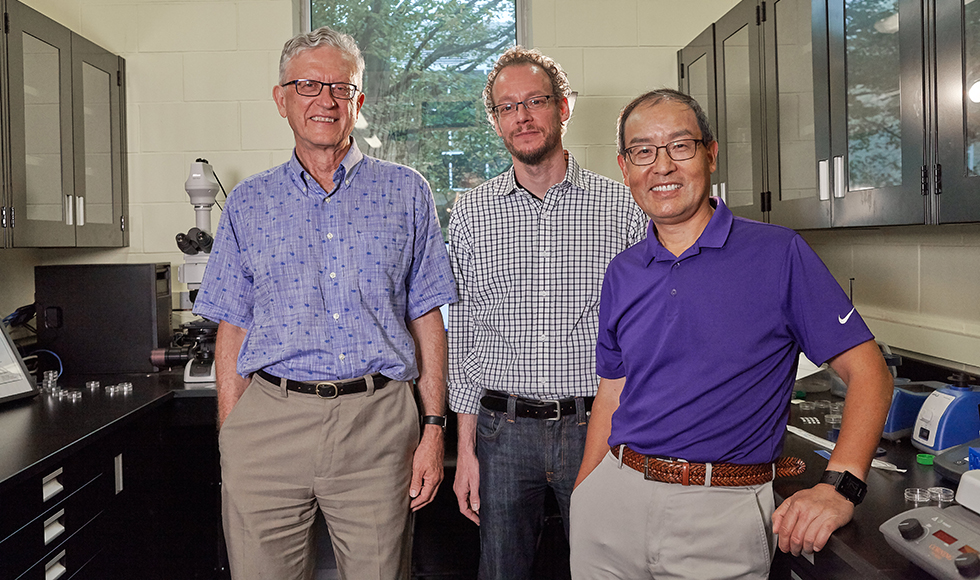 McMaster researchers have pioneered ground-breaking technology that could – for the first time – provide experimental evidence of how life was formed on the early Earth and show whether life could have emerged elsewhere in the universe.

McMaster’s new Origins of Life Laboratory which features a Planetary Simulator, a highly sophisticated climate chamber – the only one of its kind in the world – enables researchers to mimic the environmental conditions present on the early Earth, or on Earth-like planets, to explore how the building blocks of life were assembled and how these prebiotic molecules transitioned into self-replicating RNA molecules, the first genetic material found in all life today.

“We want to understand how the first living cell was formed – how the Earth moved from a chemical world to a biological world,” says Maikel Rheinstadter, a biophysicist and professor in McMaster’s Department of Physics and Astronomy, who designed the lab in collaboration with biochemist Yingfu Li and astrophysicist Ralph Pudritz.

“Currently there’s no satisfying explanation about how that could have happened, or how life could form on other planets,” continues Rheinstadter. “Solving that mystery is what this lab is all about.”

Many scientists theorize that life on Earth began 3.5 billion to 4.5 years ago in what Charles Darwin called “warm little ponds” – hydrothermal springs found in volcanic environments in which nucleotides, the essential biomolecules needed for the emergence of life, mixed with the amino acids, lipid molecules, clays and rocks, and inorganic salts contained in the ponds.

According to exhaustive research published last year by Pudritz and Ben K. Pearce – both of McMaster’s Department of Physics and Astronomy – chains of RNA polymers were created when nucleotides, formed from nucleobases delivered by meteorites into these ponds, were bonded together as a result of wet and dry cycles of precipitation, evaporation and drainage.

Read: Meteorites may have brought the building blocks of life to Earth
Read: McMaster researchers win prize for ground-breaking paper exploring origins of life on Earth

They argue it was these wet and dry cycles, created by the environmental conditions present on the early-Earth, that kick-started the chemical processes needed for RNA polymers to self-replicate and begin passing on genetic information from one generation to the next.

It’s a theory Pudritz, Rheinstadter and Li, all members of McMaster’s Origins Institute, will test using the Planetary Simulator and other equipment in the Origins of Life Laboratory.

“This lab was designed to dial up the conditions on a wide variety of habitable planets, including the conditions we imagine were present on the early-Earth,” explains Pudritz, “It can simulate the warm little pond – the geophysical environment, the atmosphere, the irradiation, the wet and dry cycles – it’s all part of it. These are the conditions in which early life was formed and it’s how we think the chemistry was really being driven.”

To test their hypothesis, researchers will create solutions of the molecules found in these ponds, then dry the mixture on silicon wafers. The samples will then be placed in the simulation chamber of the Planetary Simulator and exposed to wet-dry, day-night and seasonal cycles, as well as to the humidity, extreme temperatures, oxidizing environments, high levels of radiation and other conditions present on the early-Earth.

In the chamber, researchers will be able to simulate years of these cycles in a matter of days to study the formation of RNA sequences and to see whether any of these RNA molecules have genetic function, as well as act as enzymes – the catalyst needed for self-replication.

“At the beginning, when life was born, there was a stage in the ponds when some of these RNA molecules actually began to act as enzymes which enabled them to copy themselves, copy the genetic material of other molecules, and catalyse other reactions that are important to life” says Yingfu Li, a professor in McMaster’s Department of Biochemistry and Biomedical Sciences and a specialist on catalytic functions of genetic materials.

“We don’t know how these molecules were generated,  so this set-up, and all the other analysis equipment in the lab, will allow us to test the chemical processes that may have given rise to these magic molecules and see how these molecules may have come together to create cells,” says Li.

Ultimately, Li, Rheinstadter and Pudritz say they plan to take what they learn about the origins of life on Earth and, using the Origins of Life Lab, mimic the conditions present on other habitable planets, to understand how life could form elsewhere in our Solar System and beyond.

“I think the big question is, are we alone?” says Pudritz. “If we can understand how life was formed on Earth, maybe we can find RNA sequences that can take off in different planetary environments. If this lab has the capability that we think it has, we should be able to find other conditions where we can test these sequences and ask, ‘Does this work?’ And if the answer is yes, then we really are on the road.”

The Planetary Simulator Lab, part of McMaster’s Origins of Life Laboratory, was created through a Canada Foundation for Innovation grant, and with support from McMaster’s Faculty of Science, Faculty of Health Sciences, and Office of Research.

Rheinstadter, Li and Pudritz worked in close collaboration with Waterloo-based company, Angstrom Engineering to design and construct the Lab.