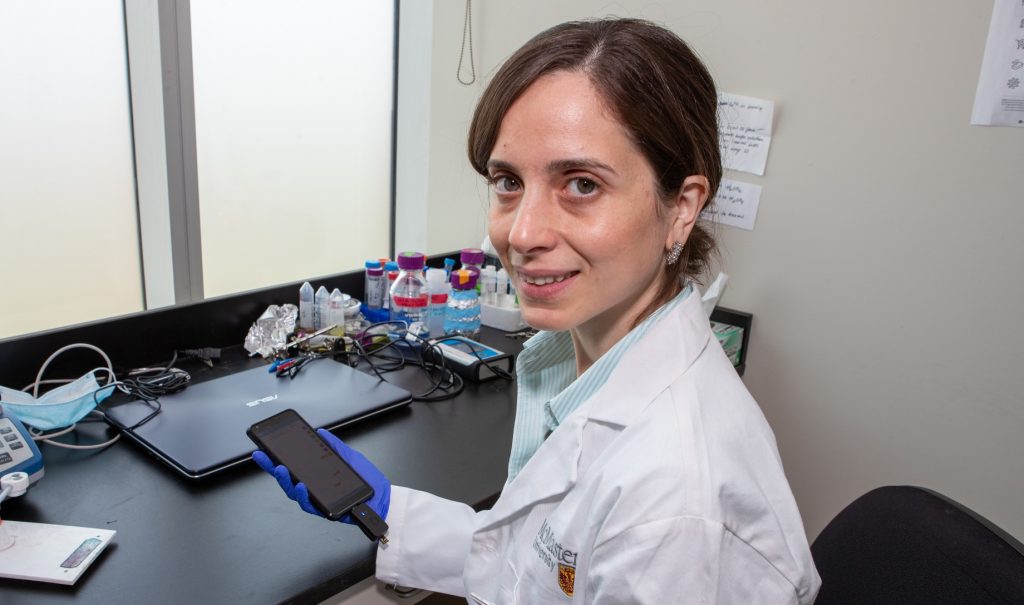 Biomedical engineer Leyla Soleymani is one of the lead researchers who have developed a hand-held device to measure a biomarker for cancer, paving the way for home-based cancer monitoring. (Photo by Georgia Kirkos, McMaster University)

Researchers at McMaster and Brock universities have created the prototype for a hand-held device to measure a biomarker for cancer, paving the way for home-based cancer monitoring and to improve access to diagnostic testing.

The device works much like the monitors that people with diabetes use to test their blood-sugar levels and could be used in a medical clinic or at home, all without lab work, greatly simplifying the process for testing blood for cancer’s signature.

A user would mix a droplet of blood in a vial of reactive liquid, then place the mixture onto a strip and insert it into a reader. In minutes, the device would measure an antigen that indicates the degree to which cancer is present.

The prototype has been designed to monitor prostate specific antigen (PSA) and the technology can readily be adapted to measure other markers, depending on the form of cancer or other chronic disease.

The ability to collect such information at home would make the daily lives of patients much easier while also generating accurate, shareable, up-to-the-minute results to guide their doctors in shaping care and treatment – all at a lower cost to the health-care system.

The device would also allow patients to continue to monitor their health after treatment.

The prototype was created by a research collaboration led by McMaster’s Leyla Soleymani, a biomedical engineer and Canada Research Chair in Miniaturized Biomedical Devices, and Brock’s Feng Li, an associate professor of chemistry who leads a bioanalytical chemistry lab.

“This is another step toward truly personalized medicine,” Soleymani says. “We’re getting away from centralized, lab-based equipment for this kind of testing.

“This would make monitoring much more accessible and cut down on the number of times patients need to leave home to provide blood samples.”

Once commercialized, this device will be a paradigm shift for cancer diagnosis and prognosis, Li says.

“Since this device is a lot more accessible and user-friendly than conventional technologies, patients will be more willing to use it, which can improve clinical outcomes and save lives.”

The researchers’ proof-of-concept work is described in an article published in the journal Angewandte Chemie. The invention will need to be tested more broadly before earning the regulatory approvals that would permit commercial manufacturing