Henry Giroux: “A writer should cause trouble” 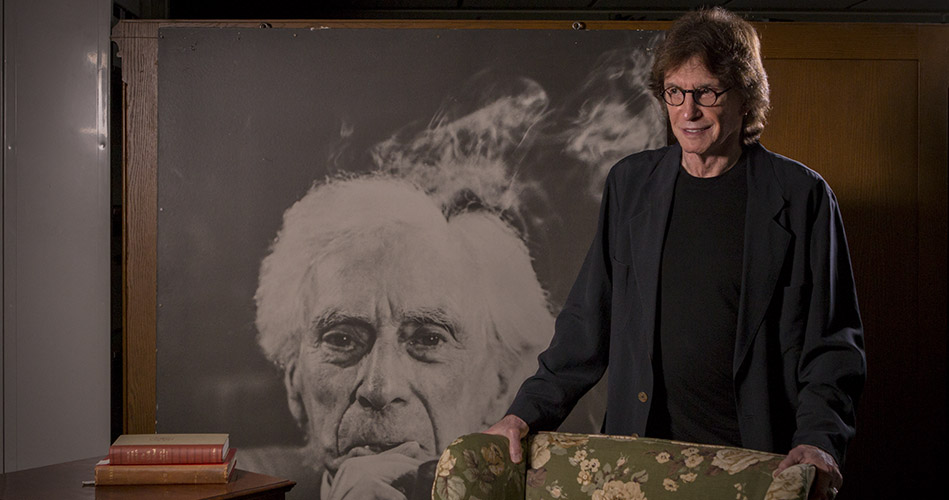 Renowned public intellectual Henry Giroux poses beside a photo of social critic, political activist and Nobel laureate Bertrand Russell, whom Giroux calls one of his “personal heroes.” The photo was taken in the Bertrand Russell Archive housed in McMaster University Library’s William Ready Division of Archives and Research Collections. Giroux recently donated his personal archive, which contains significant insights into his life and work, to the Division.

Henry Giroux believes it’s the job of a scholar to make a difference in the world.

“A writer should cause trouble,” says Giroux, a public intellectual, outspoken cultural critic, teacher and researcher who, through his prolific body of work, has brought scholarly ideas into the public realm and provoked societal debate on some of the most urgent social issues of the past 30 years.

“I was always willing to take risks,” he says. “Of course there are consequences to this, but I want to make an impact– I write and teach to make the world a better place.”

Soon Giroux’s archive, which contains significant insights into his life and work, will be available to the scholarly community and the public.

Giroux, a Professor in McMaster’s Department of English and Cultural Studies and McMaster University Chair for Scholarship in the Public Interest, has donated his archive to McMaster University Library’s William Ready Division of Archives and Research Collections. The archive will be available for researchers to access later in 2017.

From his pioneering work as an educational and cultural theorist, to his writings on youth culture, media studies, race studies and the state of public and higher education in the United Sates, Giroux says the archive exemplifies what, over the years, has become the goal of his work- to bring debates on pressing social issues out of academia and into the public realm.

“The archive shows how I was responding to very specific periods and social problems in the political academic world,” he says. “What this offers to young scholars is both a trajectory and a process by which these subjects were engaged and it opens up the historical period in which I was writing. This is not just private work– this represents a mirror to the outside world at that particular time and how I moved from being strictly an academic writer to one who started writing more publicly.”

“I wanted to maintain the rigor of academic work while at the same time making it accessible to a variety of audiences,” adds Giroux who has written extensively for scholarly journals and for a number of public and popular venues including the Village Voice, The Progressive, Toronto Star, and The New York Times to online media such as Truthout, Tikkun, and CounterPunch.

The archive contains manuscripts and articles written, or edited by Giroux, as well as books from Giroux’s own library– complete with handwritten notes– that informed his work. The collection also contains personal correspondence, including letters from influential philosopher, educator and social theorist, Paulo Friere– a colleague and mentor to Giroux– as well as a number of the many awards Giroux has received throughout his career.

“In the tradition of great public intellectuals like Bertrand Russell, Henry’s work addresses complex social issues in an accessible way, seeking to elevate public discourse and affect social change,” says Vivian Lewis, McMaster University Librarian. “Henry is among the most influential cultural theorists in the world today whose work has inspired students, scholars and citizens alike– we are fortunate to house the archives of such a prolific and distinguished scholar.”

Giroux says universities and academics have a valuable role to play in what he calls the “creation of a critically aware citizenry” and hopes that the archive will provide both a model and incentive for academics to become “border crossers,” moving between the academic and public realms.

“I hope people will come away and learn something from it, and use it in their own work,” he says. “I hope that it’s not just dead time for them, that it collects in their head in a way that says, “Wow, this is the kind of model I’m interested in. This is what I want to do, I want to make an impact on the world.’”

Giroux has authored, or co-authored 63 books, written several hundred scholarly articles, delivered more than 250 public lectures, been a regular contributor to print, television and radio news media outlets, and is the most cited Canadian academic working in any area of Humanities research.