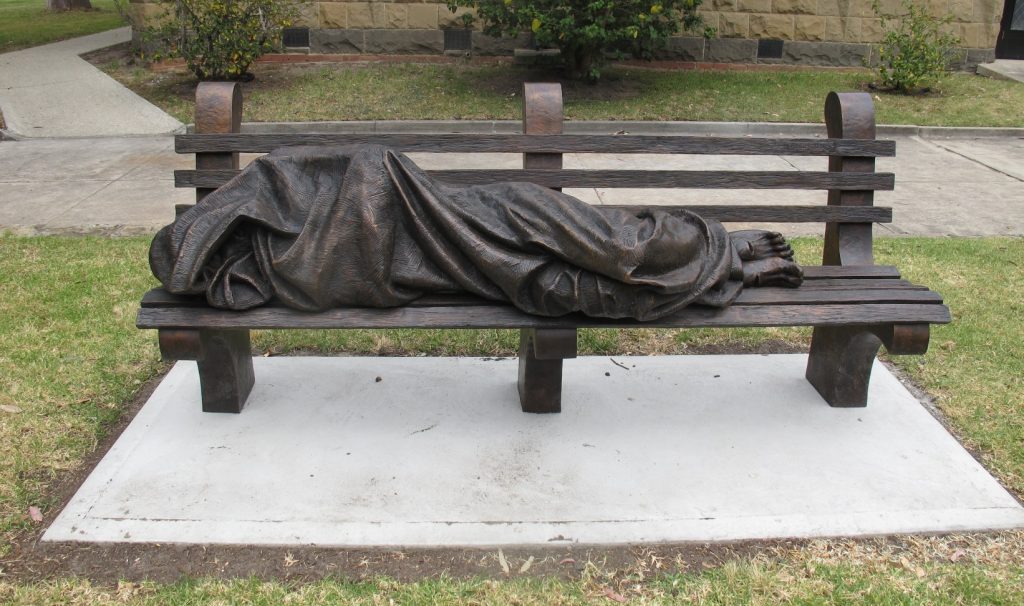 Recently, a life-size bronze sculpture of Jesus, called Homeless Jesus, went viral after someone made a 911 call about a homeless man on a bench. The bronze sculpture by Canadian artist Timothy Schmalz depicts Jesus, identifiable by the wounds on his feet, sleeping on a street bench wrapped in a blanket.

With replicas located in prominent urban locations, such as Buenos Aires, Capernaum, New York, Madrid, Melbourne, Rome and Singapore, Homeless Jesus now dots the globe. There are six replicas in Canada, including one here in Hamilton.

On Oct. 12, only 20 minutes after a replica of the sculpture was installed at St. Barnabas Episcopal Church in Bay Village, Ohio, a community member called the emergency department, mistaking it for a person in need. Saturday Night Live lampooned this story in a skit on their Oct. 17 show.

But this is not the first time the statue made headlines.

In 2013, news outlets told a rags-to-riches story: how this sculpture was rejected by prominent churches, only to be requested and blessed by Pope Francis.

In 2018, news outlets covered its presence as it “stopped a runaway dump truck from crashing into pedestrians.”

I have spent the past two years looking at the news coverage of this religious public artwork to try and figure out why both faith-based organizations and secular media are fascinated by it. I examined interviews with faith leaders at organizations with a Homeless Jesus and online news articles that reference it.

Regardless of one’s religiosity, viewers are captivated by the image of a Jesus as a homeless figure. For faith-based organizations, Homeless Jesus is a symbol that communicates and teaches viewers about core Christian beliefs.

Schmalz produced this sculpture as part of a series that visually depicts a passage from the Bible found in the Gospel of Matthew 25:35-45. Here, Jesus tells his followers that they are caring for him when they tend to the needs of those who are sick, poor, naked, hungry, thirsty, imprisoned and strangers.

For those familiar with the story of Jesus, the sculpture’s message may appear ostensibly obvious. Yet the sculpture asks them to take this message literally and to pay attention to the dignity of those less privileged.

Likewise, those on the margins of society may feel comforted by the notion that Jesus (considered by some to be the Son of God, and by others, a wise prophet) identifies with their situations.

Faith-based organizations that install a Homeless Jesus replica say they choose to do so because they want to make a bold public statement about their social convictions.

Despite an unfamiliarity with or ambivalence toward the story of Jesus, Homeless Jesus may still resonate with secular and non-Christian viewers. The sculpture presents symbols with universal meanings: a street bench and a body trying to stay warm, wrapped in blanket. These symbols say something about physical vulnerability in a public space. Combined, they become an icon of homelessness.

Bronze sculptures are often reserved for historic monuments and statues of community heroes. When this medium is combined with an image of homelessness, it generates a clear and powerful message. The unusual combination asks viewers to see those who are homeless as people with dignity, worthy of being sculpted. At the very least: they are worthy of safe and affordable housing.

This sculpture is a challenge to the dominant tendency to ignore the needs and stories of people who are homeless. The homeless population is often perceived as “natural losers” in a competitive market economy. Capitalism justifies the presence of extreme poverty in affluent societies. Homeless Jesus presents an alternative narrative.

Homeless Jesus, and its spot in the limelight, demonstrates how religious public art can play a role in promoting the ideas of an equitable society.

Back in the ’70s, critical theorist Herbert Marcuse said art can oppose oppressive ways of thinking, behaving and speaking. As a scholar who left Germany shortly before the onset of the Second World War, Marcuse understood the horrors that arise when a population uncritically serves the interests of the elite.

According to Marcuse, art that offers alternative perspectives and challenges social norms, can create spaces where people can identify and question oppressive social systems.

Jürgen Habermas, another key critical theorist who is still active writing and theorising today, proposed that although religion can be prescriptive, it can also provide an alternative perspective on social reality. He said religious and secular citizens should be willing to learn from one another.

Habermas suggested that at formal levels of political decision making, religious individuals should work to translate their ideas into a language that their secular counterparts find accessible.

Kaitlin Wynia Baluk is a PhD candidate in Health and Society at McMaster. This article is republished from The Conversation under a Creative Commons license. Read the original article.

Images of bison bones provide a window into the cultural and ecological relations that tie animal and human lives together.