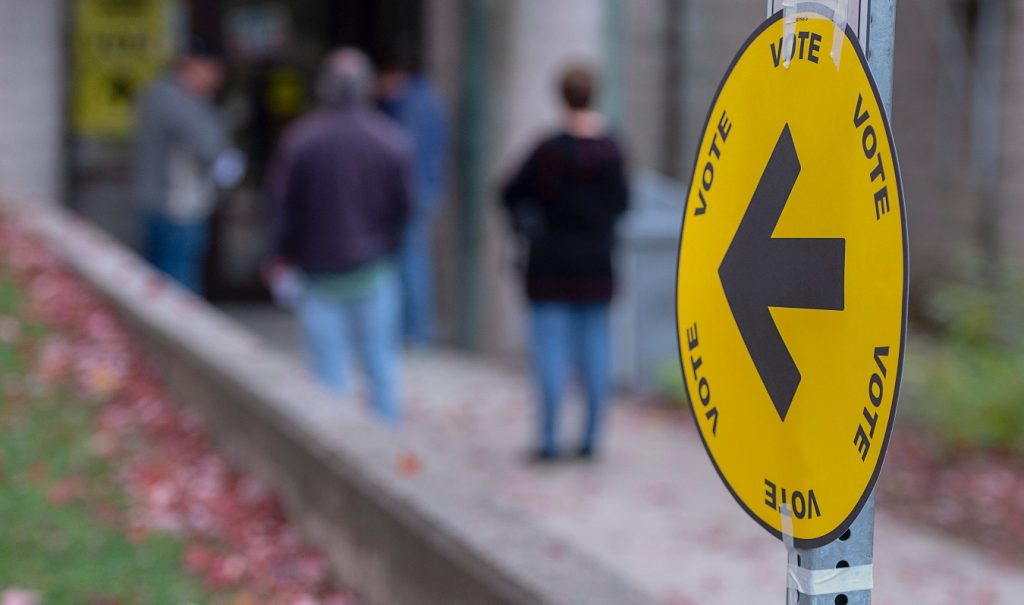 Voters head to cast their ballots in Canada’s federal election in Dartmouth, N.S., on Oct. 21, 2019. (Photo by Andrew Vaughan/ The Canadian Press)

The data collection practices used by political parties could pose a threat to voters’ engagement in the democratic process and could have negative implications for Canadian democracy.

In the United Kingdom, an investigation launched following the Cambridge Analytica scandal “uncovered a disturbing disregard for voters’ personal privacy.” It concluded that Cambridge Analytica had aggregated Facebook users’ personal information without their consent for use in political campaigns, such as in the U.K., where it was used it to send micro-targeted information to voters.

Similar practices have been uncovered around the world.

Elections all over the world are becoming increasingly electronic and data-driven. At the same time, data is quickly becoming such a highly valued commodity that recent publications have not only described it as the “oil” of the 21st century, but as its “plutonium.”

Canadian voters remain largely unaware of the types of personal information that political parties collect. Many are also not informed that federal privacy legislation does not apply to political parties in Canada, leaving parties largely beyond the reach of federal law in their use and collection of data.

That may change, however. Canada’s Competition Bureau recently announced it’s investigating the three largest federal political parties amid allegations they “made misleading statements about the manner in which they collect and use Canadian voters’ personal information.”

How are voters affected?

As researchers, we sought to find out: How does the collection and use of personal information by federal political parties affect voters’ willingness to interact with campaign personnel during elections?

As a part of the Digital Ecosystem Research Challenge, we conducted a survey of Canadians during the 2019 federal election campaign. We informed respondents that political parties may collect a wide variety of personal information about voters, including their religion, gender, ethnicity and political views.

After being informed about these data collection practices, more than half (51 per cent) of respondents said that they would be “somewhat” or “very” unlikely to speak with campaign personnel. This suggests that awareness of federal parties’ collection of personal information may discourage some voters from engaging with party officials during elections. This is concerning given that engagement between voters and parties during campaigns is an important way to mobilize the vote.

At the same time, our study suggests something can be done. More than 40 per cent of respondents said that a party’s stance on privacy made a “moderate” or “major difference” in their willingness to engage with campaign officials.

If data is the new means of parties targeting and reaching out to voters, good privacy laws and policies could perhaps promote Canadians’ willingness to engage with them and enhance voter confidence in party institutions.

Current federal laws merely require political parties to publish their privacy policies publicly, including online. Federal privacy law does not set minimum standards for the content of policies and establishes no mechanism for ensuring parties’ compliance. Nor does it provide a mechanism to ensure parties abide by their privacy promises.

Canadian federal law provides no way for people to find out what information parties hold about them. British Columbia is the only province in Canada where privacy law binds political parties. This allows the B.C. privacy commissioner to examine political parties’ data collection practices.

Extending federal privacy laws to political parties will not fix all of the troubling data collection practices of the digital 21st century, but it’s a start.

The Cambridge Analytica scandal erupted in a country where political parties are bound by privacy legislation. U.K. privacy laws did not stop political parties from amassing large quantities of data and using it to micro-target British voters.

In Canada, voters have little information about what exactly is being done with their data. That’s because federal privacy law does not impose specific legal requirements on how political parties collect and use their data, and there are insufficient enforcement mechanisms or investigatory powers.

Left unchecked, this power could have consequences for voter trust in federal political parties and democratic engagement in elections.

Sara Bannerman is an associate professor and Canada Research Chair in Communication Policy and Governance at McMaster University; Julia Kalinina is a law student at York University, and Nicole Goodman is an assistant professor of Political Science at Brock University.