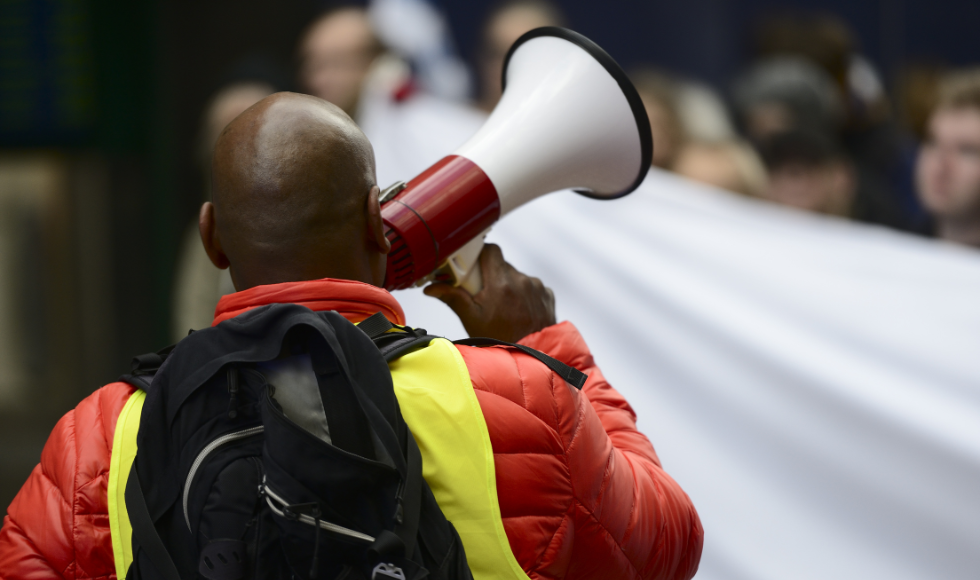 A wave of labour organization in North America, led by young and racialized workers, is providing many lessons for those watching, says Stephanie Ross, director of McMaster’s School of Labour Studies.

The last two years have been a tumultuous time for workers. From business closures and job losses during lockdowns, to a spike in demand giving workers more power to push for better pay and benefits, it’s an interesting time in labour, says Stephanie Ross, director of McMaster’s School of Labour Studies.

“One of the big stories that researchers are tracking is the wave of organizing in the U.S., including in notoriously anti-union places like Amazon and Starbucks. The pandemic has really intensified work and tensions in those workplaces,” explains Ross.

It’s not just the wave of organization, but who is organizing them that makes this particularly interesting.

“These movements are being led by young workers and racialized workers, which says something about where people are positioned in the labour market and, I think, counters certain stereotypes about who is a union member and who wants to be unionized,” says Ross.

It also pushes back on the narrative that younger workers are passive and not really interested in politics or improving their workplaces.

This is true in the case of the unionization win at Amazon’s Staten Island warehouse earlier this year. Ross says that the worker-led organizing drive provided many lessons for those watching.

“It shows us that there needs to be an organic organizing drive that’s embedded in the workplace and the people in the workplace who are leaders need to be at the front of it. If you’re asking people to take risks to unionize, you better also be on the front line taking those risks to show that you also are making sacrifices – it is really an important part of building trust and credibility.”

While some of these unionizing efforts have spilled over into Canada, there does not appear to be as much of a wave here, and in some cases, the lessons from Staten Island are not being taken to heart.

For example, in their attempts to unionize Amazon’s Hamilton fulfillment centre, the Teamsters are using plant gate leaflets, which Ross says has been proven by labour studies researchers to be relatively ineffective.

“It’s not personal and not really connected to issues in the workplace. The messages aren’t coming from trusted people inside the workplace so it’s easy for the employer to say that’s not the workers, that’s a third party coming in trying to interfere with our special relationship,” she explains.

While the unionization momentum is good, the hard work is not over. These unions still need to establish a bargaining relationship with these employers and get collective agreements negotiated and signed.

“There’s a lot of investment in keeping unions out of certain sectors in the economy and I don’t see that changing. And I don’t see that there are any real moves at the level of government to try to create an easier path to unionization for those workers that really need it,” Ross said in an interview with CBC News.

All this is happening against the backdrop of inflation. In some sectors, this is driving a “catch-up militancy,” not just because wages are not keeping up with inflation, but also because there’s a feeling of hardship that has been building up over the past few years and people want to get compensated for those difficult times.

“We can see that right now in the construction sector in Ontario, where many are on strike. There have been labour shortages in skilled trades for a while, which deepened in the pandemic. In the context of a labour shortage, they have a lot of inherent structural power and they are using it,” she says.

With the pandemic appearing to enter a different phase, for workers it’s about who is going to emerge from the last two years better off and worse off. How different groups of workers are going to be able to act on their desires, and potentially increased bargaining power, will also depend on the attitude of the government of the day. Within that there are issues of gender and racial inequality, in which women and racialized workers are more likely to have their bargaining power constrained by government because they tend to work in the public sector.

“There’s a deepened sense of anger and unfairness. The real challenge is how that anger gets channelled,” she says.

There are some examples of that anger being channelled in hopeful ways that are demanding better for communities. Others are channelling it in reactionary and destructive ways, a topic Ross recently explored in a piece in The Conversation co-authored with well-known labour activist and former MP Peggy Nash.

“I think there are lots of rays of hope but it could go either way. There are always opportunities,” she says.

“The pandemic was a particular kind of opportunity structure, it created certain conditions that made it possible for movements like the labour movement to mobilize and galvanize people around particular ideas. It really depends on how much energy and willingness people have to act collectively.”