How to fight wildfires and climate change with wetlands 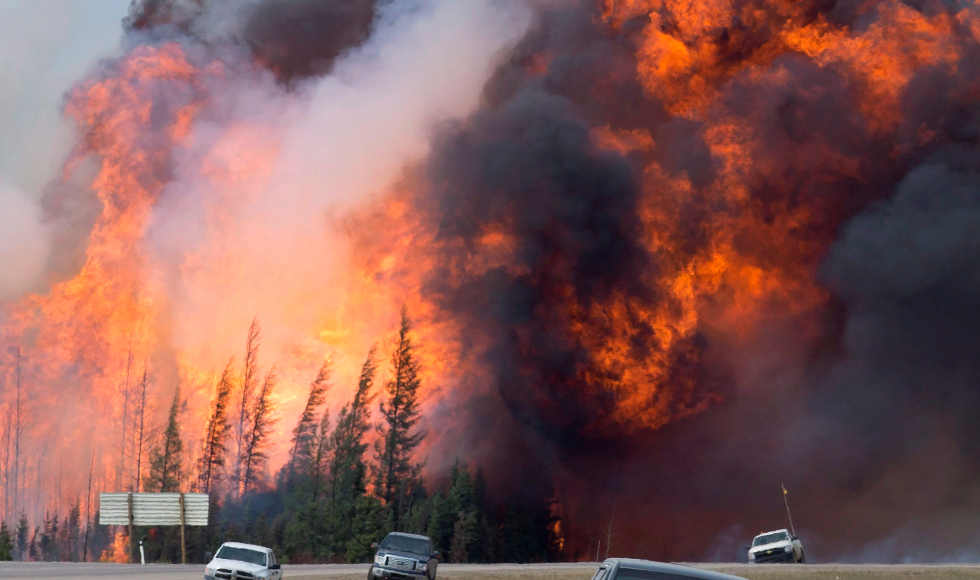 A wildfire rips through the forest near Fort McMurray on Highway 63 in May 2016. Photo by The Canadian Press/Jonathan Hayward

BY Mike Waddington and Sophie Wilkinson

As unlikely as it may sound, a new approach for fighting the destruction of wildfires in Canada’s boreal region may lie in unassuming wetlands packed with soaking wet layers of peat and topped with living moss.

These same humble wetlands can also play a heroic part in curbing the effects of global climate change, but only if we protect those that remain and bring back the ones we humans have already damaged and destroyed.

Certainly, the more glamorous belt of boreal forest that rings the top of the northern hemisphere is vital to the planet’s ecology, and it plays a significant part in storing carbon. But between tracts of forest, there is a far bigger, if less familiar repository of carbon stored directly underfoot in large and small tracts of peatlands.

Natural, healthy peatlands hold decaying moss, lots of water and support a living carpet of a special fire-resistant moss called sphagnum. In this way, the peatland can act as a fire break to restrict the fire from spreading and limit the amount of carbon emitted to the atmosphere as it burns.

But the opposite is true for a dried or degraded peatland, which can accelerate, magnify and prolong the threat of fire. A peat fire can survive unseen even through the winter, only to surface again and take down neighbouring forests in the spring and summer.

Dried peat burns readily, releasing carbon that was previously locked away for centuries to millennia, generates thick and potentially deadly smoke and resists being extinguished. In Russia, the smoke from out-of-control peat fires contributed to the deaths of thousands of people in Moscow in 2010.

Northern peatlands cover 3.5 million square kilometres globally and store an estimated 500 billion tonnes of carbon, which is the equivalent of about 60 years’ worth of global carbon emissions from fossil fuels. The world needs our northern peatlands, but they can only help us if they are healthy and wet, and keeping them that way has not been a high priority. Instead, human activity and the unchecked growth of trees in a warming and drying boreal forest is increasingly leaving our peat vulnerable.

Sometimes the difference is hard to appreciate. The seemingly simple act of building a road across a peatland can, unintentionally and invisibly, turn a beneficial fire break into a menace.

Road beds can choke off underground water flow, silently transforming healthy, saturated peatlands into hazardous repositories of the worst kind of fuel. Deliberately draining peatlands for agriculture, development or resource extraction can have the same or worse effect often perched at the edge of where people live, work and play.

We saw and later studied a problematic peatland in Fort McMurray in 2016. The only highway in and out of town, Highway 63, had been built through a drained peatland, which became caught up in the Horse River Creek wildfire — the costliest natural disaster in Canadian history.

We were able to compare the combustibility of the drained and undrained sections of that peatland, and the differences in burn severity and carbon loss were stark, as those who evacuated the terrifying fire as they tried to navigate that highway can attest.

Through this research we determined that the un-checked growth of spruce trees in drained peat can actually further harm a peatland’s ability to resist fire. When such trees are allowed to grow tall and wide, they shade out the protective cover of fire-resistant sphagnum “super mosses.” At the same time, they suck up water like giant drinking straws, turning the forest and peat alike into burn-ready fuel.

As climate change continues to warm and dry the boreal region the threat of mega peat fires and carbon loss will continue to grow.

The fortunate truth is that peatlands, even years after being dried out, can be dragged back to the other side of the wildfire and carbon ledger — from a source of fuel and carbon to a fire break and carbon sink — by strategic re-wetting, selective spruce tree removal and replanting with fire-resistant super mosses.

In fact, the most effective technology for restoring peatlands is a made-in-Canada success story. The restoration technology is expensive, but can save untold costs in terms of wildfire risk protection, air quality and climate mitigation.

With over 20 million hectares of degraded northern peatlands in Europe alone and with the threat of climate change mediated peatland drying and degradation expected to impact millions and millions more, we call for planting mosses and peatland restoration to become as common place as planting trees as a means to fight climate change.

Canada is home to one-third of the world’s northern peatlands and those peatlands, unlike those in other parts of the world, are currently primarily intact. That is heartening, of course, but it also means we have the responsibility of more to protect.