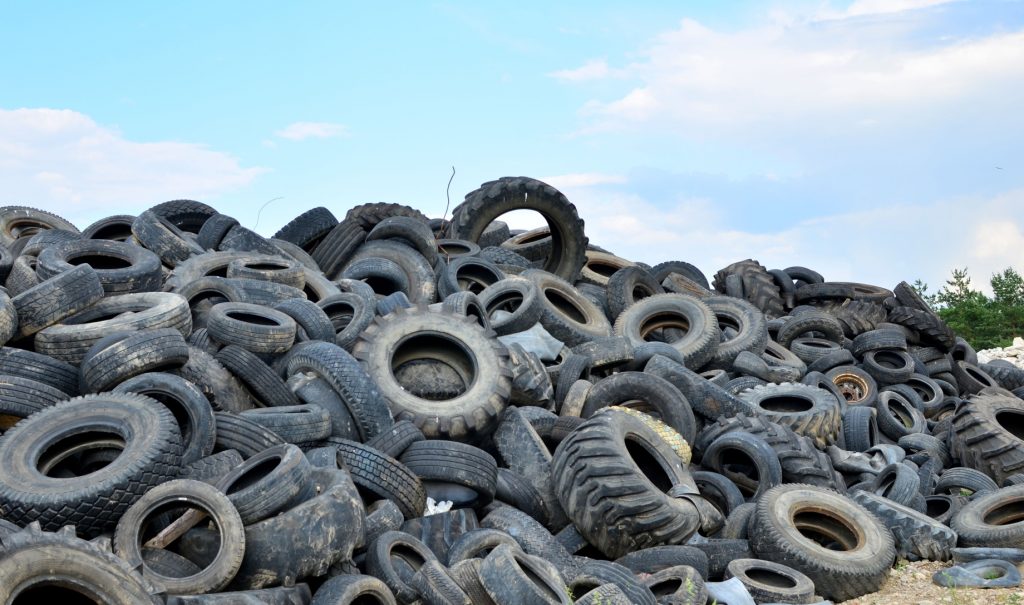 McMaster scientists have developed a recycling technique breaks down old tires into their basic components so that they might be reused rather than end up in a landfill. (Shutterstock photo)

BY Michael A. Brook

Michael A. Brook is a professor of Chemistry. This article is republished from The Conversation under a Creative Commons licence. Read the original article.

Approximately three billion automobile tires were produced worldwide in 2019 alone. Automobile tires are the classic example of a high-volume product derived from non-renewable petroleum resources that is designed for single use; they do not fit the desired paradigm of reduce, reuse, recycle.

Some old tires are used as fuel in the cement industry or ground into rubber crumb and used as a reinforcing agent — parents will be familiar with the rubber mats used in children’s playgrounds.

These are inefficient ways to utilize a non-renewable resource. Problematically, many tires end up in tire landfills where they risk contaminating the local environment through leachate (the liquid that percolates through waste sites and into the ground) or worse, through fires that release toxic gases and particulate into the atmosphere.

On Dec. 20, 2019, a difficult-to-control fire broke out at the TRACC tire recycling plant in Minto, N.B., where approximately one million tires were stored. It took one week to put the fire out. Such fires aren’t uncommon: another notable tire fire happened 30 years ago, when 14 million tires in Hagersville, Ont., burned for more than two weeks.

From @silasvjbrown — There’s a fire at a tire recycling facility in Minto this morning. I can’t even count the amount of trucks and fire fighters present. Part of Route 10 has been closed. . #mintotirefire

Prior to advances in automobile design, notably the advent of steel-belt and radial profiles 50 years ago, tires would need to be replaced after 20,000 to 40,000 kilometres. We now expect tires to last 100,000 kilometres. That reliability on the road makes tires extremely difficult to recycle.

New ways to break down tires

In my lab, the Brook Research Group at McMaster University, we have discovered an efficient and mild process that uses silicone chemistry to break the sulfur-to-sulfur bonds that hold tires together. The silicones selectively cut the sulfur-sulfur connections, leaving only organic chains that can be easily isolated and reused to create new products.

This process, originally designed to make new silicones using very small quantities of a catalyst, has been repurposed to address the sustainability of petroleum-based tires.

The chemical process first involves cutting tires into sections and then forming powdered crumb from them, steps that are currently used in commercial tire recovery plants.

Then, a mild, rapid reaction produced by heating this material with specific silicones at 100C for 45 minutes converts about 90 per cent of the available organic materials into a readily processed pale yellow oil.

The remaining substances — such as inorganic carbon, silica, metal and polyester cord fibres — are readily removed by filtration.The oils recovered from used tires are very similar in constitution to the virgin polymers initially used to make new tires. My lab has also demonstrated that they can be repurposed.

More: McMaster chemists find new way to break down old tires into material for new ones

In one instance, the recovered polymers were converted back into new rubbers, as shown above with the tire of the model toy car. The inorganic residue, initially removed by filtration, could also be reused as a reinforcing agent in the new rubber.

There is more work to be done. We need to better establish the range of products that can be made from the recovered polymers and reduce the quantity of catalyst needed to improve the economics of the process.

The overall process offers an opportunity to close the loop on automobile tires, as the rubber can be efficiently degraded and then reused to make other useful materials. It provides a new strategy to re-purpose the valuable materials in used tires and simultaneously address a perplexing environmental problem.

Michael A. Brook is a professor of Chemistry. This article is republished from The Conversation under a Creative Commons licence. Read the original article.