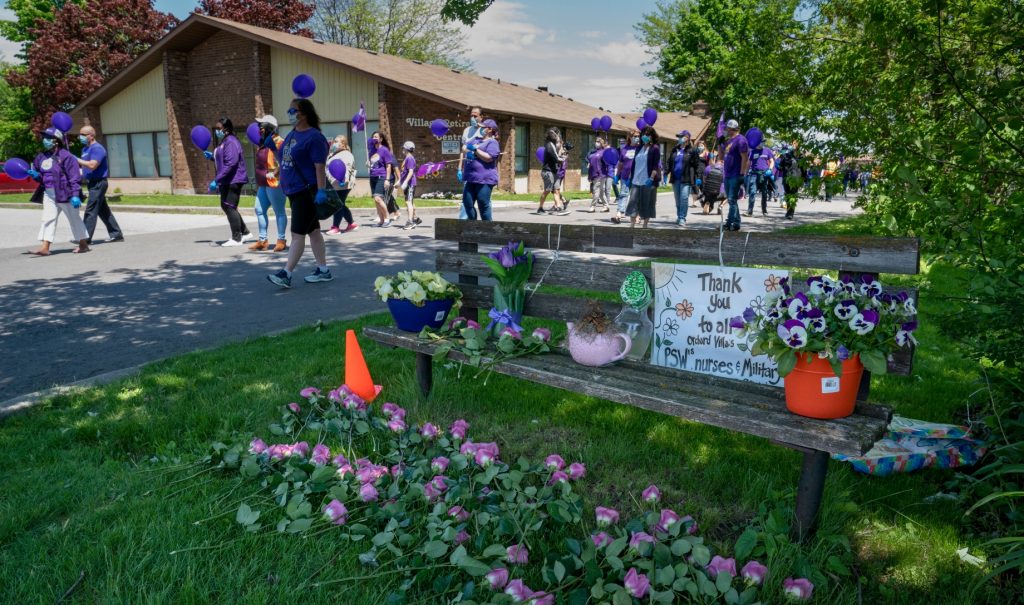 About 150 nursing union members show support for long-term care workers at the Orchard Villa Long-Term Care in Pickering, Ont., in June 2020. The facility was hit hard by COVID-19 infections. (Photo by Frank Gunn/ The Canadian Press)

As Labour Day approaches, close your eyes and picture the typical union member in Canada. If you conjured an image of a man wearing a hard hat or working in a factory, you missed the mark.

The typical union member in Canada is actually a woman who works in the public sector. She may be a teacher, a nurse, an office clerk at city hall or a mail carrier. All of these jobs are more likely to be unionized than those in the majority-male manufacturing, warehousing or construction sectors. In fact, Statistics Canada’s Labour Force Survey data reveals that, as of 2019, women made up 53.1 per cent of union members. That’s up from 45.8 per cent in 1998 and 29 per cent in 1978.

There’s no question that women benefit from unionization. Being unionized boosts women’s wages more than it does men’s, when both are compared to their non-union counterparts.

Unionized women also experience a much smaller gender pay gap when compared to unionized men. In other words, unions help women overcome the effects of gender discrimination in the workplace. This “union advantage” is even greater for women who are affected by other forms of systemic discrimination.

Despite becoming numerically dominant within unions, women are still under-represented in positions of union leadership. The number of women leading national unions in Canada today can be counted on one hand. And women currently lead only three of the country’s provincial and territorial federations of labour.

The under-representation of women in positions of leadership is not unique to the labour movement. We see similar imbalances in corporate and political spheres.

Although unions are doing better than Canada’s corporate sector, organized labour still has a long way to go when it comes to fully shattering the glass ceiling for women.

The glass ceiling is an often-used metaphor that refers to an invisible barrier that prevents women and other equity-seeking groups, regardless of their skills or qualifications, from advancing into leadership positions within organizations. While in theory, nothing prevents a woman from being elected to a top leadership position, the glass ceiling represents the subtle ways that organizations devalue and doubt women’s leadership skills based on gender stereotypes.

Despite these barriers, women have periodically risen to top leadership positions within individual public sector unions or labour federations over the years. But securing positions of leadership within unions has been a long, hard-fought struggle for women workers.

And even while being severely under-represented in positions of leadership, union women have undeniably had an impact. Their activism paved the way for the labour movement to campaign for and secure pay equity, employer-paid daycare, paid maternity leave and rules banning gender-based discrimination in the workplace.

Unions could do much more to fight gender discrimination by having more women in senior leadership positions.

Not surprisingly, public sector unions, where women have always been most concentrated, were the first to see women elected to significant leadership roles.

Public sector unions continue to be trail-blazers. In November 2014, Irene Lazinger of the B.C. Teachers’ Federation was the first woman elected to the presidency of the B.C. Federation of Labour.

In contrast, a woman has yet to be elected to the presidency of any major private sector union in Canada. However, there are signs that a long overdue breakthrough may be in the works.

Some private sector unions have redesigned their leadership structures to help women break the glass ceiling within their own ranks. In 2013, Unifor, Canada’s largest private sector union, adopted an executive structure that guarantees the number of women on the union’s executive board be at least equal the proportion of women in the union overall.

In 2017, the Canadian section of the United Food and Commercial Workers Union achieved equal representation of women and men on its national executive board for the first time after delegates to the union’s convention adopted a resolution mandating the expansion of women’s representation.

Later this year, two women — Bea Bruske of the United Food and Commercial Workers Union and Linda Silas of the Canadian Federation of Nurses Unions — are expected to compete for the presidency of the Canadian Labour Congress. It will be the first election in the history of the congress where both major contenders are women.

Why does gender representation matter now, more than ever?

So many of the issues we now face because of the COVID-19 pandemic and the resulting disruptions in work, home and school are borne by women. Racialized and poor women are even more at risk of COVID-19 exposure because of the service and care work they do and the lack of choices they have to engage in social distancing.

More than ever, we need a gendered and equity lens in leadership to understand how the pandemic is being experienced differently, and how union responses can protect those who are most vulnerable.

Unions must continue to enhance efforts to recruit and sustain a critical mass of women, particularly visible minority and LBGTQ women, into leadership roles in the years to come. These efforts cannot be mere tokenism. Rather, they must reflect a commitment to ensuring that the changing face of Canada’s unionized workers is reflected in the leadership of the union movement.

To understand what it was like to survive on CERB compared to provincial social assistance programs, Ontarians were surveyed about their employment and income situations during the COVID-19 pandemic. Nearly 800 people responded to the online survey.

International economists, mathematicians and epidemiologists are tackling some of the most perplexing and troubling economic questions of the pandemic in an upcoming symposium co-organized by a McMaster researcher and expert of financial mathematics.