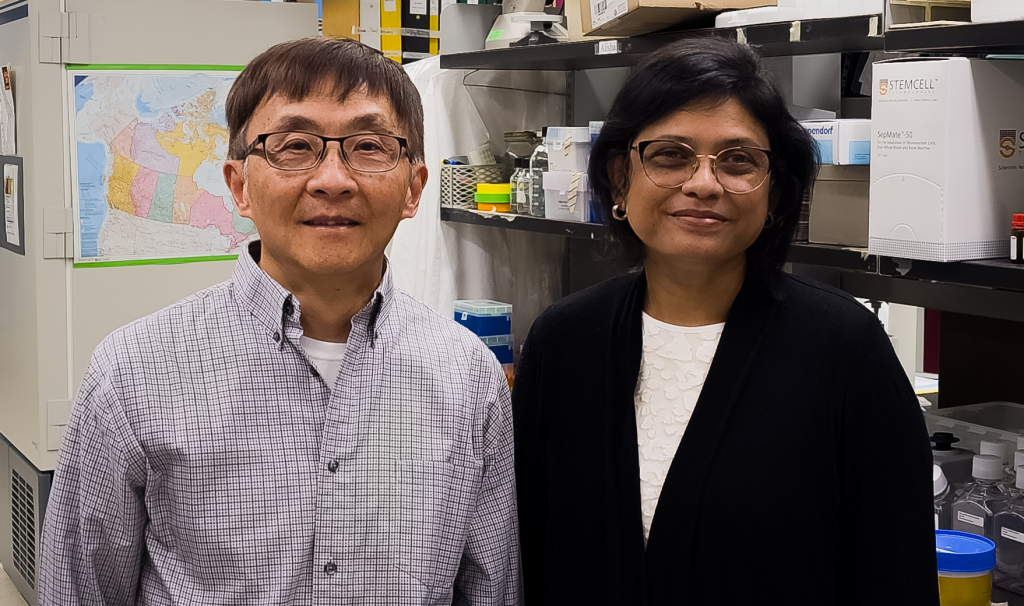 A common tuberculosis vaccine triggers an immune-communicating mechanism from the gut that offers broad protection against respiratory pathogens in the lung, a research team led by McMaster scientists Zhou Xing, left, and Mangalakumari Jeyanathan found.

Scientists studying how a common tuberculosis vaccine works have discovered that it induces a previously unknown mechanism in the gut that triggers a systemic immune alert, which then causes changes in the innate immune system in the lung to fend off not just tuberculosis, but a broad range of respiratory pathogens.

The findings could help direct the development of the next generation of vaccines, particularly those designed to target respiratory pathogens, the researchers report.

For the study, published online in the journal Nature Immunology, the McMaster team studied a widely used TB vaccine known as Bacillus Calmette-Guérin (BCG), which is administered by injection and has been used worldwide for many decades.

They found the vaccine sets off a chain of events, starting by altering the gut microbial communities, which then produce signals that travel through the bloodstream into the lung, ultimately inducing innate immune memory or trained immunity.

The induction of tissue-resident innate immune memory by such an immunological axis between the gut and lung, which the researchers established by studying experimental animals, had not previously been known.

“This study suggests that some vaccines even given through the skin by injection may be able to enhance a type of immunity at remote tissue sites such as the lung that protects against a broad range of pathogens,” says Zhou Xing, the senior correspondence author of the new study and professor at the McMaster Immunology Research Centre and department of Medicine.

Xing is also an investigator with Canada’s Global Nexus for Pandemic and Biological Threats.

“If the right type of vaccine is developed correctly it may protect not only against the targeted infection but could go on to provide broader protection against other infections such as influenza and SARS-CoV-2.”

Previous research published in the journal Cell by the team had established that respiratory delivery of a viral-vectored vaccine could also induce this type of innate immunity. Vaccines in mist form, administered by inhalation, have been found to induce innate immune memory within the lungs, for example.

“These new findings suggest properly designed vaccine strategies can induce multiple layers of protective immunity at the site of pathogen entry,” says Mangalakumari Jeyanathan, a research scientist in the department of Medicine and lead researcher on the study.

“But the type of vaccine used is important, which in this case was a live microorganism-based vaccine.”

Tuberculosis is still a major global health challenge even though it is curable and preventable.  According to the World Health Organization, 1.6 million people died from TB in 2021, and an estimated 10.6 million fell ill. Low- and middle-income countries account for nearly all cases.

The study, conducted in collaboration with researchers at McMaster’s Farncombe Family Digestive Health Research Institute and the university’s department of Chemistry & Chemical Biology, is funded in part by the Canadian Institutes of Health Research, the National Sanitarium Association of Canada, the Canadian Foundation for Innovation and Genome Canada.