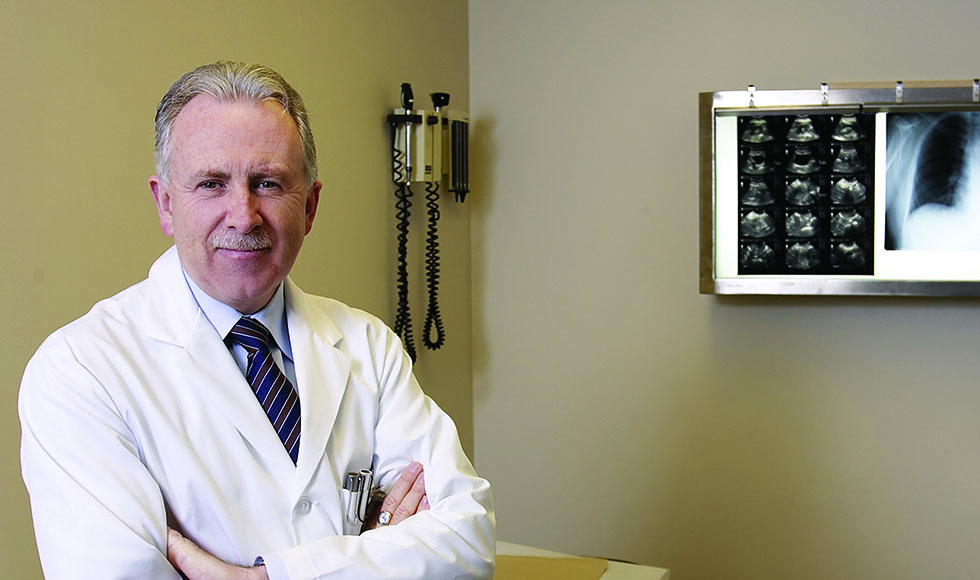 A large international study led by a McMaster researcher has found a patient-centric treatment that works for people with mild asthma.

People with mild asthma are often prescribed a daily treatment regimen, but up to 80 per cent do not follow the routine, using inhalers only when they have an asthma attack. Now the researchers have found an as-needed combined-drug inhaler is a viable treatment option.

Paul O’Byrne is the principal investigator on the study that suggests an inhaler with a combination of budesonide, a steroid that controls inflammation, and formoterol, a beta2-agonist that helps to open airways and make breathing easier, may be an alternative to conventional treatment strategies.

O’Byrne is a respirologist, a professor of medicine at McMaster University’s Michael G. DeGroote School of Medicine and a clinician scientist at the Firestone Institute for Respiratory Health at St. Joseph’s Healthcare Hamilton.

The results were published in the high-impact medical journal, The New England Journal of Medicine (NEJM). O’Byrne was also an author of a second NEJM article regarding mild asthma.

“Short-acting beta-agonists, also known as rescue inhalers, work quickly but they do not treat the underlying problem of inflammation,” said O’Byrne of the first study. “The secret in this new approach is that it not only relieves symptoms but at the same time delivers steroids required for overall control of asthma.”

According to Statistics Canada, eight per cent of Canadians, or 2.4 million people have been diagnosed with asthma by a health professional. Approximately 50 to 75 per cent of patients diagnosed with the chronic disease have mild asthma. While symptoms may not always be burdensome, airway inflammation is usually present, and mild asthma patients are at risk of severe exacerbations, commonly called asthma attacks, which can result in emergency care or even asthma-related death.

“In clinical practice, poor adherence to asthma medications, particularly inhaled steroids as maintenance therapy, is a major problem across all severities of asthma,” said O’Byrne. “As such, patients rely on as-needed inhalers for symptom relief, which doesn’t actually help improve their overall condition.”

O’Byrne and his team worked with researchers around the world to conduct a 52-week trial with patients aged 12 years of age of older with clinically-diagnosed mild asthma.

More than 3,800 patients participated from countries including Canada, China, the United Kingdom, Australia, Brazil and South Africa, among others. The trial was conducted between July 2014 and August 2017.

Patients were randomly assigned one of three regimens and were closely monitored. One group took a twice-daily placebo plus as-needed terbutaline, a relief beta agonist used to prevent and treat wheezing; a second group was on a twice-daily placebo plus budesonide-formoterol used as needed, while a third group was on twice-daily maintenance budesonide plus terbutaline used as needed. All patients received an electronic reminder to take their maintenance treatment twice daily.

The trial results showed budesonide-formoterol used as needed was superior to terbutaline alone as needed for improving asthma symptom control, as well as reducing the risk of an asthma attacks by more than 60 per cent, but was inferior to the twice-daily budesonide maintenance therapy for symptom control.

“If patients could remember to take their maintenance budesonide treatment and follow it carefully, they would get the best day-to-day symptom control, but the risk of exacerbation was the same as if they used the combined budesonide and formoterol as needed,” said O’Byrne.

“In addition, the amount of steroids used was much less when the combined inhaler was used, because the patient did not need to take it every day.”

O’Byrne is also an author on a parallel study led by Eric Bateman at the University of Cape Town in South Africa, which was also published in the NEJM.

The trial involved more than 4,200 patients on a 52-week trial in 25 countries between November 2014 and August 2017. As with the other study, participants had mild asthma and were aged 12 and older.

The results showed that in patients with mild asthma, budesonide-formoterol used as needed was comparable to twice-daily budesonide in relation to the rate of severe asthma attacks during 52 weeks of treatment, but was inferior in controlling symptoms.

“This was more of a real-world study, without the electronic monitoring twice a day or reminders to use medication, and fewer study visits, so it is more comparable to managing patients in a real facility with a lower adherence to the daily treatment course,” said O’Byrne.

“There was no short-acting beta-agonists comparator group in this trial, just the comparison of the maintenance budesonide to the reliever that contained budesonide-formoterol, but the trial outcomes were essentially identical.”

Both studies were sponsored by AstraZeneca, and are being presented May 20 at the American Thoracic Society conference in San Diego.