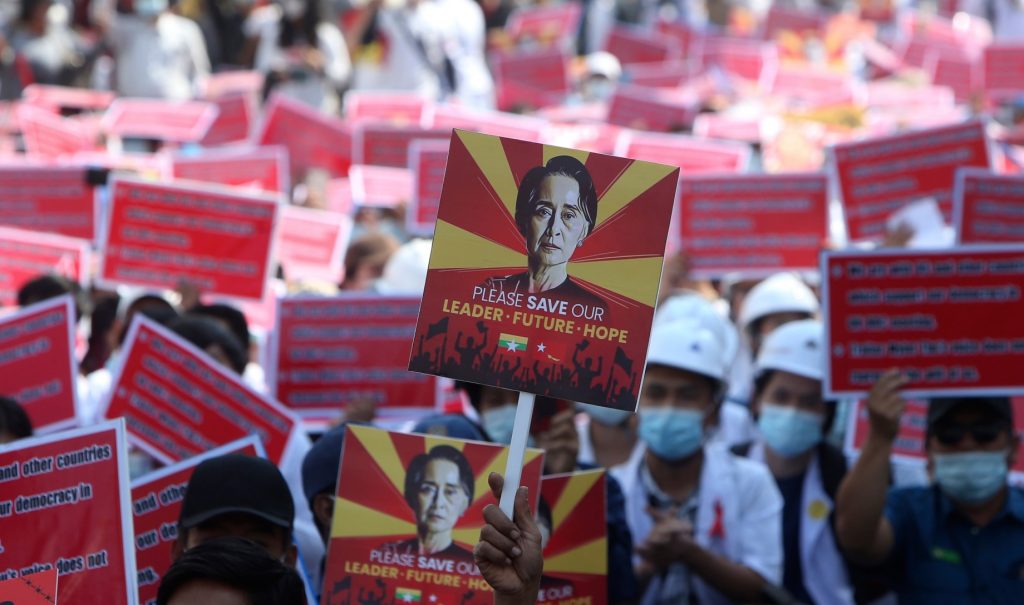 BY Cassandra Preece and Helen Beny

Myanmar citizens have been living under military control for weeks after the country’s military staged a coup. Citing issues of electoral fraud in the November 2020 general elections, the military detained elected officials, including civilian leader Aung San Suu Kyi, and implemented a national internet shutdown.

Internet shutdowns in Myanmar represent a serious threat to democracy, but these actions aren’t entirely surprising — many Myanmar citizens have experienced all this before.

During the country’s history of military rule from the 1960s to 2011, the military employed many of the same tactics to gain control. The ongoing national internet shutdowns and social media bans highlight a continued cycle of anti-democratic repression and censorship employed by Myanmar’s military — although there are ways internet service providers can help the country’s censored citizens.

The internet blackout is real. Neither my wifi nor my Myanmar sim card allow me to connect to the internet anymore. At least 2 journalists have been arrested so far tonight. Social media is very quiet now.

The path to democracy in Myanmar has been slow and laborious. The election of the National League for Democracy (NLD) in 2015 and 2020 represented significant progress and suggested democracy was finally taking hold in the country.

Unfortunately, the coup has halted the country’s progress once again.

The military has been Myanmar’s most powerful institution since its independence from Britain in 1948. The military-led coup in 1962 was followed by nearly five decades of military rule. Following general elections in 1990, the military refused to hand over power and placed the winning candidate, Aung San Suu Kyi, under house arrest for more than 15 years.

In 2008, democracy proponents were hopeful that a new constitution would finally bring democratic norms and institutions to Myanmar. But the constitution was drafted by the military regime and maintained its privileged position. For example, it gives the military “the right to take over and exercise state sovereign power” if there are any threats to national unity.

Following fraught discussions with the civilian government this month about the election, the military specifically cited provisions in the constitution to justify the coup and declare a state of emergency.

Internet shutdowns are a common tool of repression used by governments to halt the flow of web-based communication and information. Since 2019, more than 36 countries have used internet shutdowns for a variety of reasons. Recent shutdowns have occurred in India, Egypt, Ethiopia, Belarus and other countries.

Myanmar has become a frequent user of internet shutdowns. In 2007, the military junta escalated their information warfare tactics and ordered a national internet shutdown to maintain complete control.

In June 2019, the Myanmar civilian government initiated the world’s longest internet shutdown at the behest of the military, citing issues of instability and the use of internet services to co-ordinate illegal activities in Rakhine and Chin states. Lasting almost a year, the regional shutdown raised serious concerns that many citizens had been left in the dark about the global COVID-19 pandemic.

On Jan. 31, 2021, the Ministry of Transportation and Communication — controlled by the military — ordered a nationwide internet shutdown to prevent citizens from reporting on the military coup. The move was similar to actions taken by the military in neighbouring Thailand during its 2014 coup, which focused on information control and blocked more than 56 URLs.

Following orders to both state-run and foreign internet providers, the initial shutdown in Myanmar began around 3 a.m. Connectivity levels declined 50 per cent by 8 a.m. As access to the internet was severely restricted, the military successfully executed their coup, detaining key political leaders and NLD supporters.

Instead of a consistent network shutdown, internet shutdowns and social media bans have come in waves over the past two weeks in Myanmar. A partial internet shutdown was initially observed, shielding coup efforts. Once the military seized power, connection was restored.

Citizens turned to Facebook, the main source of news and communication for 50 per cent of the population, to protest the coup and demand a return to democracy. On Feb. 3, the military ordered a social media ban, primarily focused on Facebook. Telenor Myanmar (part of Norway’s Telenor Group) restricted Facebook, while Myanmar Posts and Telecommunications restricted Facebook, Instagram, Messenger and WhatsApp.

Since Feb. 1, millions of people in Myanmar have participated in civil disobedience campaigns and protests on the streets and online. Although social media bans have remained in place, protesters have found ways to co-ordinate through encrypted messaging services and virtual private networks, known as VPNs.

As mass protests continue, the military is responding with further internet shutdowns and social media restrictions. A second nationwide shutdown was ordered on Feb. 6, but connectivity was mostly restored by Feb. 7. On Feb. 14 and 15, citizens experienced two consecutive nights of internet shutdowns, allowing the military to carry out further crackdowns.

The military has changed its censorship technique to curfew-styled internet blackouts that seriously affect the ability of citizens to communicate and verify information.

The various tactics used in Myanmar to quell growing protests against the coup are different from previous shutdowns in 2007 and 2019, but they have a similar effect.

On Feb. 15, in Mandalay, soldiers broke up a group of 1,000 protesters at the Myanmar Economic Bank using slingshots, sticks and a number of warning shots.

The military has also recently put forward a new cyber-security bill that could give it sweeping control over online data and allow the collection and monitoring of citizens online. This bill would severely affect privacy and freedom of speech.

If the military regime is unable to prevent citizens from mobilizing, Myanmar will almost certainly experience continued cycles of internet shutdowns. Citizens may also be met with extreme force and government-sanctioned violence, similar to the current situation in Ethiopia.

What can be done?

The situation in Myanmar should be a point of international concern. Internet shutdowns prevent citizens’ ability to document violence and hold perpetrators accountable, leaving them at risk of extreme violence.

But the international community, including foreign ISPs, governments and advocacy networks, can help end shutdowns in Myanmar.

Given the vast changes to the telecommunications landscape in Myanmar, the growing number of ISP providers could undermine social media bans and internet shutdowns. Telenor Myanmar, for example, seems to have recently intentionally delayed a Twitter ban amid public outcry. Delaying the execution of an order is one way for ISPs and telecommunication operators to resist shutdown orders, as they’ve done in Egypt.

Telenor Group has attempted to provide details of the military’s directives, but it was recently ordered to stop. Nonetheless, the company’s actions have helped raise awareness about the situation in Myanmar, and ISPs should develop clear policies around forced shutdowns in the future in countries experiencing political upheaval.

Governments should also regularly denounce the use of internet shutdowns and pressure ISPs to take a stronger stance against them — in Myanmar and beyond.

Cassandra Preece and Helen Beny are PhD students in political science at McMaster University. This article is republished from The Conversation under a Creative Commons license. Read the original article.

A new website focused on the United Nations Sustainable Development Goals showcases impactful research at McMaster that aligns with the goals and offers a toolkit for other institutions and researchers.