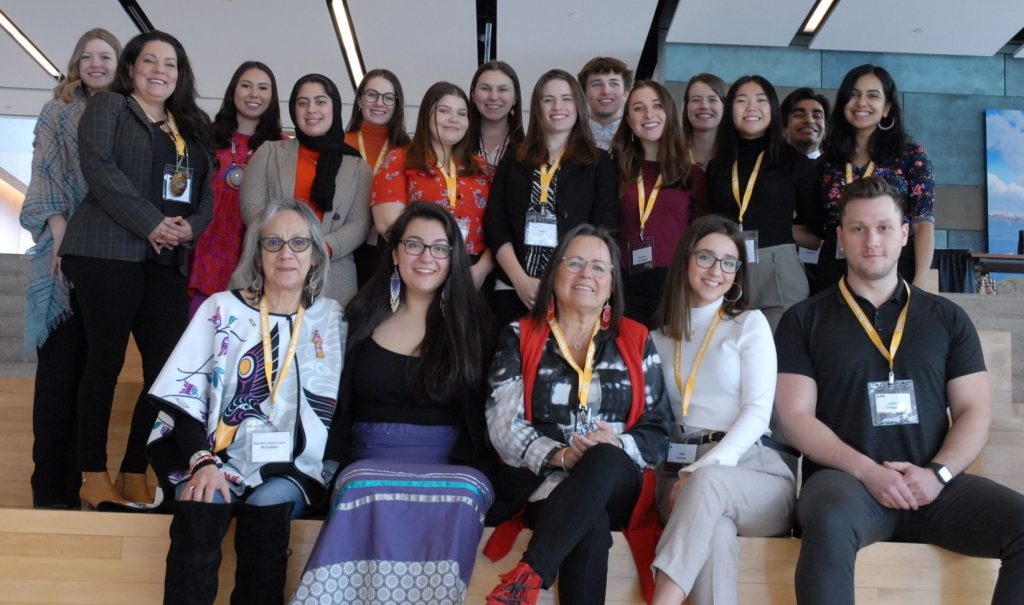 Early on a Saturday morning, two high school students from Brampton attended a Hamilton workshop on water security. Only a few seats over sat a Canadian senator and a McMaster physician, all of them avidly taking notes.

The teenagers — two-thirds of the advocacy group Three Teens for Clean Water — were on their third day at a major conference on Indigenous health and community research.

We wanted to educate ourselves more. We’re trying to fight environmental racism and help create better access to clean water. We’re still learning how to advocate, and we were so inspired by the things we heard here.
— Kaylee Brewster and Rachel Lim, Gr. 12 students from Brampton

The conference, “Coming Together to Co-create Health Equity,” started with a keynote address by  Senator and residential school survivor Mary Jane McCallum, who spoke of the importance of giving youth the tools and opportunities to advance Indigenous health and well-being.

It was so exciting for me to see a university that really walks the talk of Reconciliation, that they have such a huge support group, and that they’re marshalling their forces into so much, including making space for students to step into the realm of academy.
— Senator Mary Jane McCallum

It grew out of a grassroots initiative organized annually by undergraduates in the McMaster Indigenous Health Movement, but co-presidents Julie Laroux and Josha Rafael said this was the first time the group had organized an event on this scale.

At the start of January, we had only 32 registrants. Now we have more than 250 people here and we had to use an overflow room to get everyone in.
— Bernice Downey, MIRI director

The conference emphasized the need to treat Indigenous Knowledge on par with western science, and to look at Indigenous health and research from a holistic, inclusive perspective.

Indigenous health is not just about medicine. It’s about mental health, water security, food, social justice and respect. It’s about the interrelatedness and interdependence of every aspect of the natural world. If our land is dying, if our water is toxic, we can’t be healthy.
— Dawn Martin Hill, Paul R. MacPherson Chair in Indigenous Studies, lead on Co-Creation of Indigenous Water Quality Tools project

Panellists, speakers and workshop leaders also led discussions about participatory research that is driven by and conducted with Indigenous peoples; on changing the way the academy and universities perceive Indigenous knowledge and Indigenous knowledge keepers; on the need to address Canada’s troubling history of colonialism to truly move toward Reconciliation; and on pressing environmental concerns that put the health of Indigenous peoples at even greater risk than other populations.

McCallum, who stayed for all three days, talked about her career as a dentist. She treated thousands of Indigenous people, often in situations where they had little or no access to equitable health care.

You can’t just show up, grab water samples and leave. A big part of doing research is talking to people who are affected by it. You have to stay, talk to people in the community, explain what you’re doing and what you want to find out, and ask them what their concerns are.
— Charles de Lannoy, assistant professor of chemical engineering

Some of the biggest health challenges facing Indigenous communities arise from a lack of access to clean, safe water.

Engineering professor Charles de Lannoy’s research team found dangerously high levels of mercury in the water supply at Six Nations, which is downstream from several urban centres on the Grand River, and where only 12 per cent of homes can use water from an on-site state-of-the-art water purification plant.

Although contamination is the greatest water-related health concern, especially in communities that haven’t had safe drinking or washing water in decades, the problems go far beyond water-borne illness.

There’s no running water at the birthing centre at Six Nations — imagine having to have a baby there. There’s no safe water at the schools, or in our homes. It’s taking a toll on our young people. You have to wonder how much it feeds into high rates of depression and suicide.
— Dawn Martin Hill

In a sector where hiring and funding hinge on researchers’ publications and citations, which in turn are neither community-based nor participatory, Indigenous researchers find themselves marching to two different beats, often at the expense of their own health.

Critical reminder by Dr Chelsea Gabel from @MACIndigenous @McMasterHAS about the inordinate burdens placed on our #Indigenous colleagues & need to redefine what work is mertitorious #ICHR2020 pic.twitter.com/TsdIvv8QKh

It’s time for non-Indigenous people to recognize this is a reciprocal agreement. We have knowledge, too. It’s time we both listened to what the other has to say.
— Amy Montour, adjunct clinical professor of family medicine

There is always the fear that your research might not be validated, or that using your Indigenous knowledge would be seen as not enough. But storytelling methodologies and art-based Indigenous research are valid and valuable. You have to walk the talk and challenge what the mainstream expects of you.
— Bernice Downey

A panel from the Faculty of Health Sciences talked about Reconciliation-based institutional reform and changing how researchers and clinicians approach matters of Indigenous health. Systemic change moves slowly, but now more than ever, there is a willingness to create that change, they said.

We need to understand the past and the truth to move forward. We’re slowly making strides and we have more people — from leadership down — engaged and interested in becoming part of a solution, not the problem.
— Mark Walton, dean of faculty affairs, Faculty of Health Sciences

McCallum and conference organizers said the event was so successful, they hope to see more like it in years to come.

I’ve learned so much, and I carry back so much with wisdom from elders from students, that when I walk into Senate, I will be carrying their words and their energy, and it will get to the Senate floor. — Mary Jane McCallum