Research shows myriad benefits of exercise … so why don’t we move more? 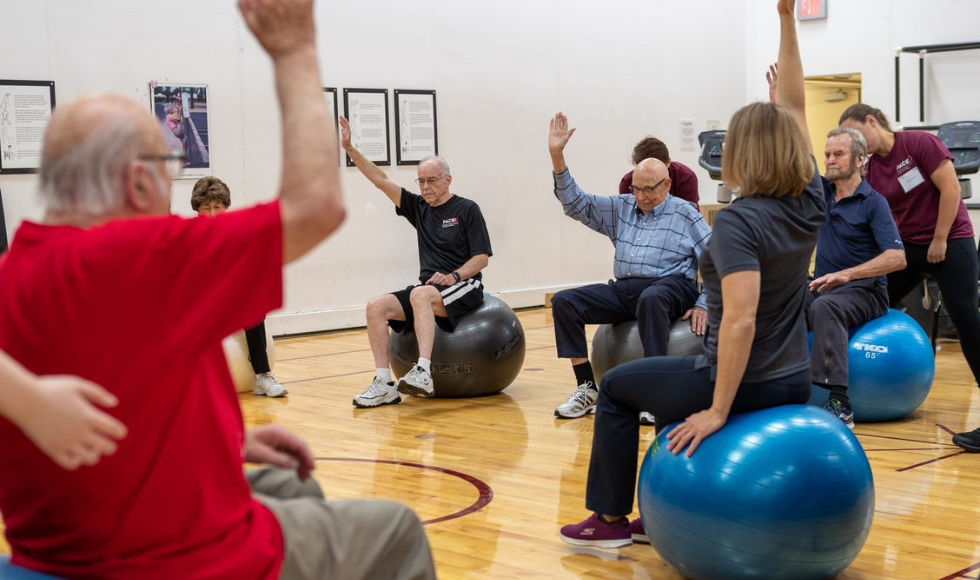 Exercise can improve memory and cognition, and even help ward off dementia and ease depression.

BY Kaleigh Rogers for the Faculty of Science

When Jennifer Heisz talks about the health benefits of exercise, you can take her word on it. Not only is Heisz a Canada Research Chair and the associate director of McMaster University’s Physical Activity Centre of Excellence (PACE), she’s also a triathlete who learned firsthand the value of physical activity.

“I have some mental health issues that emerged in graduate school when I was studying,” Heisz said. “I borrowed a friend’s rusty old road bike and the cycling soothed my mind. I pedaled my way through my PhD and that shifted a focus in my research toward exercise.”

Heisz now focuses on how “moving the body impacts the mind,” and has led studies that are helping uncover the underlying functions that lead to a myriad of mental benefits from exercise.

Now, a research study showing benefits to physical exercise is not exactly a shocking discovery. We all know exercise is good for us. But Heisz’s work and those of her peers in the field has helped establish how exercise is not only good for our bodies, but also our brains: exercise can improve memory and cognition, and even help ward off dementia and ease depression.

If there was a pill that could provide the laundry list of benefits exercise does, we’d all be lining up to take it. Yet most of us aren’t moving nearly enough.

The most recent health measures survey from Statistics Canada (in which participants wear a monitor to measure their physical activity) found that only half of Canadians meet the recommended 150 minutes per week of moderate-to-vigorous intensity physical activity.

Why, when research consistently demonstrates just how important exercise is to our health, do so many of us struggle to get moving? It’s partly due to the challenges of conducting exercise research and partly due to human evolution.

It’s not as if people aren’t aware that exercise is good for you… it’s just that the knowledge of its many benefits isn’t enough to override that innate instinct to stay still. If you’re not as active as you should be, you can blame it on your species. Human beings are capable of quite intense physical activity…but that doesn’t mean we were built to like it.

“We evolved to be physically active for two reasons, and two reasons only: when it was necessary or when it was rewarding,” said Daniel Lieberman, professor of human evolutionary biology at Harvard University and the author of Exercised: Why Something We Never Evolved to Do Is Healthy and Rewarding. “Now we’re asking people to go for a five mile run in the morning and, yes, it’s good for you, but you have to overcome all kinds of deeply rooted instincts to avoid unnecessary, unrewarding physical activity.”

Lieberman explained that, when you consider the history of our species, exercise — that is, “voluntary physical activity for the sake of health and fitness” — is a relatively new invention.

For much of our history, humans were physically active only when we needed to be: to gather food or avoid danger, for example. Because food was not always readily available, it made sense to conserve our energy if there wasn’t a very good reason for us to be moving, so we evolved to favour resting over running. Now, with food readily available and physical activity not required for much of our daily living, those instincts are preventing us from getting the exercise we need.

This is part of the reason why mountains of evidence demonstrating the many positive impacts of exercise may not be enough to motivate us to strap on our running shoes.

It’s not as if people aren’t aware that exercise is good for you — as Lieberman noted: “Is there anybody on the planet who doesn’t know that exercise is healthy?” — it’s just that the knowledge of its many benefits isn’t enough to override that innate instinct to stay still.

Even firsthand knowledge isn’t always enough: I know for a fact I always feel better after I’ve gone for a run, but try reminding me of that when my alarm goes off at six in the morning and it’s 5 degrees outside.

According to Lieberman, people who have been able to establish a regular physical fitness regime are not more virtuous than everyone else, nor do they like exercise more or understand the science better. They’ve just found ways to, essentially, trick themselves into doing it.

“They’ve found a way to make it necessary and rewarding,” Lieberman said. “That’s why I think the best way to get people to exercise is to make it social. It’s the most rewarding way to be physically active for most people.

But our caveman brains aren’t necessarily all that’s going on here. Part of the reason the research on the benefits of exercise aren’t enough to persuade us could have to do with a misperception about the science itself.

The field of exercise science is relatively young as far as research goes, with it only really being established in the 1950s. It’s also an interdisciplinary field that combines aspects of “hard” science like biology with “soft” sciences like psychology, and this middleground can mean exercise science isn’t always given its due.

Daniele Fanelli is a meta-science researcher at the London School of Economics and Political Science who has researched the “hierarchy” of sciences. He said that “soft” sciences, or fields that are harder to categorize like exercise science, are sometimes seen by the public as not “real” science. But that’s not a fair judgement, he said. Instead, “soft” sciences are fields that seek to explain phenomena that are extremely complex, and probably not easily explained by a single metric. Because of this, it makes it harder to conduct experiments, and harder to replicate findings across studies.

“This doesn’t mean they’re any less scientific, but it does mean that the kind of epistemic reliability that they can offer is lower, by definition,” Fanelli said.

Technology — and leaning more on those “harder” elements of the field of study — can help bridge some of the gap here. Heisz, for example, is a neuroscientist whose research includes measuring certain neurotrophic factors (types of proteins that help our neurons grow and function) generated through exercise to help uncover why physical activity is linked to better memory. The “softer” part of exercise science helps identify benefits like improved memory, while the “harder” elements can help explain why those benefits come from exercise itself. Heisz said this can help people start to connect just how effective exercise is in a more practical way.

“When it comes to health and disease we often jump to the latest pill because it has a known biochemical change. If we can show people that exercise can also induce these biochemical changes, then perhaps its value as a form of medicine would be more appreciated.” – Jennifer Heisz

“It’s important for people to understand the mechanism,” Heisz said. “When it comes to health and disease we often jump to the latest pill because it has a known biochemical change. If we can show people that exercise also can induce these biochemical changes, then perhaps its value as a form of medicine would be more appreciated.”

Lactate, for example — which Heisz noted often gets a “bad rap” because it’s associated with the burning sensation sometimes felt in muscles after an intense workout — promotes neuroplasticity and the growth of new blood vessels in the brain. Heisz said this is likely part of why her research has shown that interval walking (where you walk at a steady pace mixed with intervals of higher intensity) can improve memory performance in older adults.

And, at least for some people, the findings are getting through. Dr. Andrew Budson, a neurology professor at Harvard Medical School and the author of Seven Steps to Managing Your Memory, said the link between physical fitness and the brain has been so well-established through research that it’s a main motivating factor for many people to get in shape.

“If you ask people who are older, they will tell you they are very concerned about their brains,” Budson said. “If you can connect the dots for people so they can understand why exercise is important, you can have people change their behavior. So one reason it’s important to do research into the effects of exercise, thinking, memory, and brain diseases is to help connect those dots.” At PACE, this is evident in the different community programs run at the center, including its seniors program, which pairs seniors with researchers and experts to create personalized fitness regimes. Some members also participate in research studies to help further the understanding.

For Patricia and Dennis Baker (81 and 85, respectively), the program gave them another outlet for keeping up with an active lifestyle they’ve enjoyed throughout their lives. Their lived experience captures much of what the experts above cited. The social element of the community group, for example, keeps them coming back — just as Lieberman suggested.

“You get there early enough to put on your gym clothes and then talk to people,” Dennis said.

The couple also keeps up to date with the latest research, including attending talks at McMaster when they can, which informs their motivations for staying fit. Patricia cited research that shows regular exercise can reduce the risk of developing dementia by 30 percent.

“The mental benefits are absolutely, to me, crucial. It keeps us going on so many levels,” she said.

As a result, they’re both in remarkably good shape. Their doctors give them top marks, they still live in their home with all four flights of stairs in it, and they take their neighbour’s dog on daily walks.

If, after reading this far, you’re starting to feel particularly concerned about your lack of activity, don’t panic. Exercise science has yet another piece of good news about the benefits of physical activity: it’s never too late to start. Studies have found that people who waited to middle age to start exercising were still more likely to live longer than those who never exercised, and when older adults start working out for the first time, they’re just as likely as lifelong athletes to build muscle.

The experts and the athletes agree, if you find an activity you enjoy and stick with it, you’ll start reaping the rewards. As research continues to demonstrate, it’s simply the best preventative medicine money can’t buy.