Tricky DNA could be the key to better drug delivery 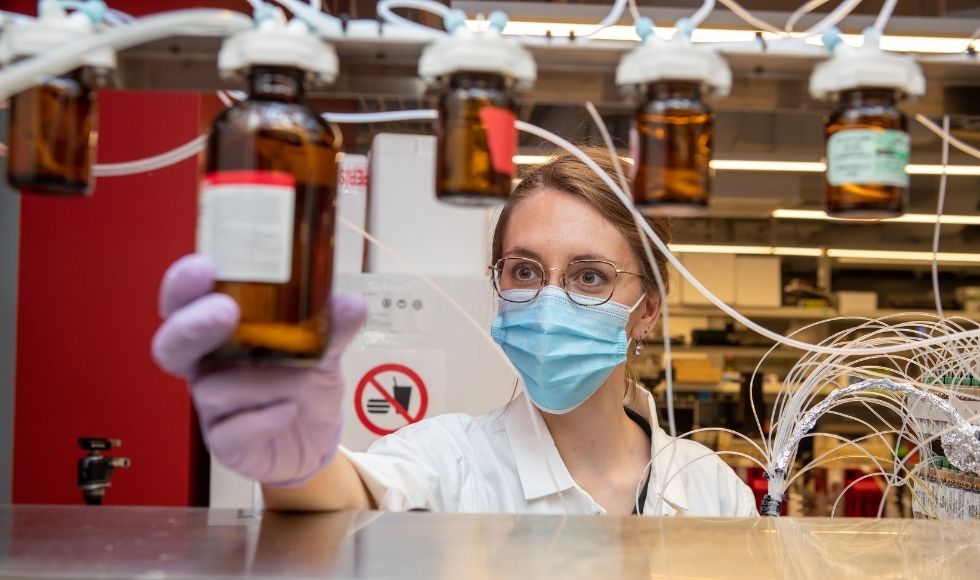 Katherine Bujold is out to trick your cells. You’d better hope they fall for it.

The assistant professor of chemistry in the Faculty of Science specializes in DNA assembly and synthesized modified oligonucleotides. That means she and the others in her lab modify the structure of nucleic acids and give it new properties.

Nucleic acids (like DNA and RNA) are highly specific and have the potential to be used as tailor-made therapies for genetic diseases, so Bujold’s research offers the promise of delivering therapeutics — like cancer medication — directly to our cells.

But why the trickery? Well, ordinarily these molecules face tremendous challenges entering cells, Bujold says. Scientists always come up against a wall when delivering oligonucleotide therapeutics through the cell membrane.

“Nucleic acids are negatively charged, just like cell surfaces, and thus are repelled by cells,” she explains. “They’re also water-soluble molecules and cell surfaces are hydrophobic — basically our cells are made to reject them.”

“It’s hard to get nucleic acids inside the cells, where our own nucleic acids are found. Our genomic DNA and messenger RNA are hard to access, but that’s where therapeutics would have the most impact,” she says.

By synthesizing and altering the structure of nucleic acid like DNA, “we’re trying to trick cells into recognizing nucleic acids.”

Bujold describes herself as 100 per cent a chemist but says her work on nanostructures of oligonucleotides is a bridge between chemistry and biology.

So when the opportunity to work alongside chemical biologists and chemists at Mac presented itself, she took it.

But by the time she arrived at McMaster from Northwestern University in the summer of 2020, she and her collaborators found themselves forced to start working together — separately.

In fact, COVID-19 made it an unusual move in more than one way for Bujold. Originally from Quebec, she now lives and works closer to her extended family in terms of geography, but the pandemic prevented them from seeing one another more than the distance did when she was in Chicago.

And the pandemic lent a new urgency to the study of nucleic acids. Messenger RNA — mRNA — vaccines, for instance, rely on nucleic acids, but they face the same barrier in terms of uptake: the cell wall and thus need to be packaged in delivery vehicles. And so expanding this idea of finding new ways to enter cells using nanostructures and oligonucleotides has suddenly become more relevant, Bujold says.

Despite the challenges of COVID-19, Bujold quickly got her lab up and running, and she now has multiple projects on the go in partnership with researchers from other disciplines, just as she intended when she moved here. And she appreciates the richness that collaboration brings to her work.

“We have this opportunity to touch on tools people use in biology and biochemistry,” Bujold says, growing more animated as she talks about working with others. “We look at the same issue but ask completely different questions.” And that variety of perspectives is incredibly useful, she says.

“They have a deeper understanding than I do to answer different questions,” she says. “But we can repurpose their techniques for our needs,” like creating biocompatible DNA nanostructures, she says, or using gel electrophoresis as a DNA sieve to purify nucleic acids, rather than in sequencing, as biologists do.

So what is the coolest part of her work? Bujold says there are two.

She loves working with biomolecules. “I get to program precise syntheses of large macromolecules — I think that’s so cool,” she says. “You can then program to assemble at the nanoscale and still retain control, and it gives us an immense platform to interrogate biology,” she says.

And she really enjoys the energy students and colleagues bring. “People are eager to learn, and I love the sense of community,” she says. “People want to be engaged and I draw my energy from it.”