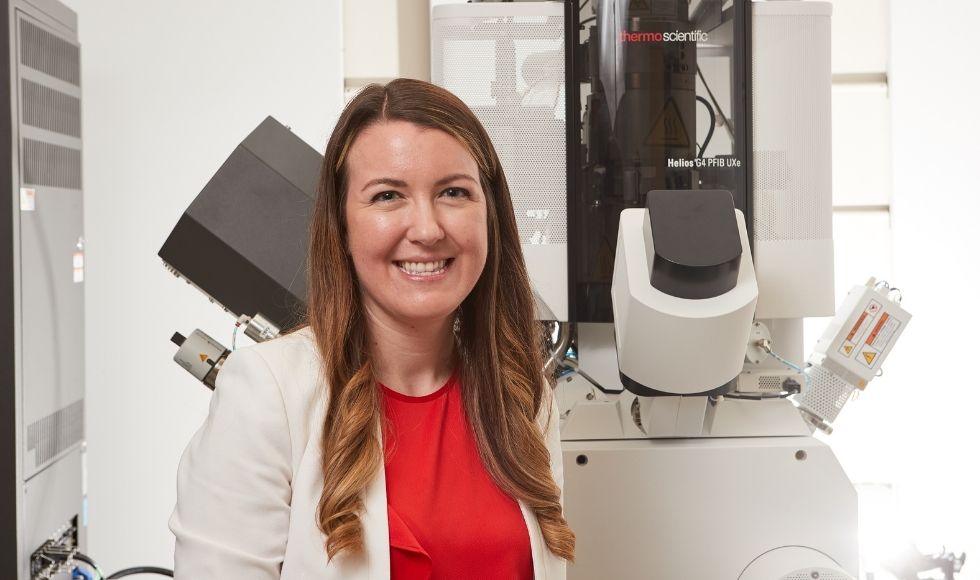 Engineering professor Kathryn Grandfield, seen here, has received a prestigious grant worth more than $1.3 million from the Human Frontier Science Program. Biochemist John Whitney from the Faculty of Health Sciences has received an early-career grant from the same organization..

Biomedical and materials science and engineering associate professor Kathryn Grandfield heads the McMaster arm of a three-year international project that will explore whether subcellular porosity networks play a role in bone mineral depletion and restoration. Her work, along with those of researchers in France and the U.S., could lead to better understanding of — and treatments for — illnesses related to bone density.

Biochemist John Whitney from the Faculty of Health Sciences is part of an international team of early-career scientists who will study how groups of bacteria, called biofilms, cooperate with one another, which could help develop targeted, pathogen-specific treatments.

The HFSP grants support innovative and interdisciplinary basic research by teams from multiple countries who combine their expertise to find answers that would elude individual researchers or laboratories working alone.

Twenty-eight HFSP grant recipients have gone on to receive Nobel Prizes. Grandfield and Whitney are the first McMaster recipients of the grants.

HFSP grants are challenging to apply for, and highly sought after — this year’s competition had a 3.8 per-cent success rate.

“I’m really honoured that we were selected,” Grandfield says. “Leading the first team at McMaster to win this award means a lot me and provides us with opportunities for major impact on understanding bone biology and eventually promoting bone health.”

Here’s more information on their projects:

Grandfield and her colleagues are studying how minerals move through bones and how bone structure changes.

The researchers are focusing on lactating mice because massive changes in bone mineral content happen rapidly during lactation. Human bones change quite dramatically as well, constantly evolving over one’s life or losing mineral density more quickly in the case of disease, Grandfield explains. Mice lose up to 30 per cent of bone mineral density while lactating, then regain most of it, while humans may lose up to 7 per cent.

The conventional theory is that minerals, like calcium, move through a cell network in the bones, the osteocyte network, which connects and transmits information through bones.

“We think that’s not the only mechanism,” Grandfield says. “Our grant is to study whether it’s just these cells that tell bones when to deplete minerals for lactation and send minerals back later, or if there’s another, even smaller porosity network responsible as well.”

The researchers are taking a multimodal approach to look at this, Grandfield says, and each lab plays a different role. “It really calls for full integration between our labs,” she notes.

“I’ll use our plasma focused-ion beam microscope at the Canadian Centre for Electron Microscopy — one of the only ones in Canada — to identify first the cell network, then a smaller pore network.”

With the information and images from Grandfield’s lab, assistant professor Alessandra Carriero at the City College of New York will use computational fluid flow models to determine whether the osteocyte porosity network alone can account for the massive change in bone minerals, or whether a subcellular porosity network plays a role in it.

Then, researcher Aurélien Gourrier at CNRS, Université Grenoble Alpes in France, will apply artificial intelligence and machine learning to compare Grandfield’s images — “which are challenging and expensive to perform” — to correlate them to a simpler type of microscope, allowing them to look at more samples.

This grant represents new research for the team of three. “We have never looked at mineral flow inside bone — most of our work has focused on bone implants and disease,” Grandfield says.

“Studying mineral transport and fluid flow will increase our understanding of bone biology and help decipher other bone diseases that involve mineral exchange, like osteoporosis.”

“There’s a lot of potential with this project that invests in basic science research,” Grandfield says. “If we can understand this fundamental biological mechanism, we can apply it to many other situations. If we know how bones communicate and grow, we have a far greater ability for designing more suitable interventions.”

Whitney, an assistant professor in the Department of Biochemistry and Biomedical Sciences and a member of the Michael G. DeGroote Institute for Infectious Disease Research, is part of an international team studying how how groups of bacteria, called biofilms, cooperate with one another.

“This grant gives us the resources to study a really interesting microbial phenomenon,” Whitney says.

Biofilms occur when groups of bacterial cells assemble into communities, and that the individual cells within these communities specialize to perform different tasks, Whitney explains. Just as a functioning human society needs electricians, plumbers, doctors, and more, biofilms need bacteria that perform a number of different activities in order to thrive.

These ‘communities,’ Whitney says, are a very common form of microbial growth that are often resistant to physical removal and to medications like antibiotics. He believes that better understanding the mechanisms through which they function could result in the ability to target specific priority pathogens, as opposed to current pan-targeting approaches.

With a physicist/mathematician, a microbiologist, a biochemist, and a structural biologist, the interdisciplinary team will take a unique, holistic approach to studying biofilms, Whitney says.

“Working together across disciplines will allow us to tease apart the many different pathways that give rise to the complex biological process of bacterial biofilm formation.”

Whitney’s grant is one of seven early-career HFSP awards administered this year.