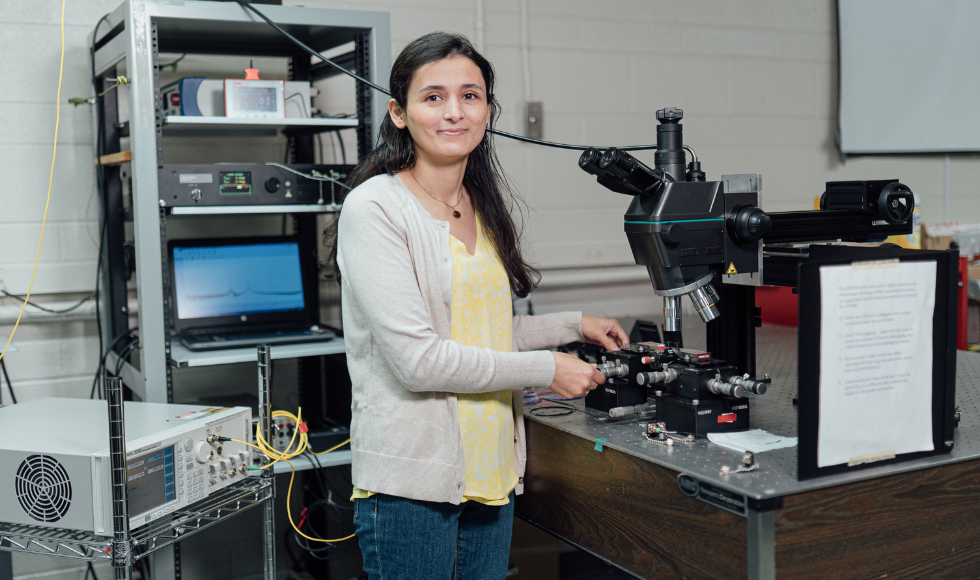 Scientific curiosity and a lot of hard work have paid off for PhD student Khadijeh Miarabbas Kiani. She’s the lead author of a paper that demonstrates a single, working laser on silicon, using a simple, cost-effective method.

“Silicon is not a great material for lasing,” Miarabbas Kiani explains. “It’s a good detector material, but not an efficient emitter of light.”

Her field of study is silicon photonics, which creates ultra-compact, lower-cost, and energy-efficient optical systems that are useful in many applications, from high-speed communications to self-driving cars to medical diagnostics. However, the current manufacturing process to fabricate a laser onto a silicon chip is complex and costly, due to the element’s inefficiency as a light emitter.

Miarabbas Kiani decided to explore the problem for herself. In August 2020, after many months of experimentation, she achieved her goal. “I couldn’t express my happiness!” she recalls with a laugh. Because of the pandemic, there was no one else in the lab. She re-created her experiment, got the same result, and called her supervisors.

Reaching for the holy grail

“This is the holy grail of photonics,” says Jonathan Bradley, Barber-Gennum Chair in Information Technology, an assistant professor in the department of engineering physics, and Miarabbas Kiani’s co-supervisor. “Fabricating a laser on silicon has been a longstanding challenge.”

Light-based circuits on silicon began to be developed in the 1980s, but building the actual laser was quickly recognized as a major hurdle. “You can build all the other parts of an optical circuit on silicon, but the laser itself — the light source that generates the signals — has always been a problem because of silicon’s fundamental properties,” says Bradley.

Bradley notes that Miarabbas Kiani’s achievement is remarkable not only for demonstrating a working laser on a silicon chip, but also for doing so in a simple, cost-effective way that’s compatible with existing global manufacturing facilities. This compatibility is essential, as it allows for volume manufacturing at low cost. “If it costs too much, you can’t mass produce it,” says Bradley.

The optical bench top of the future

Now completing her fourth year of doctoral studies in the Department of Engineering Physics, Miarabbas Kiani is a member of Bradley’s research group. The team explores ways to replace complex, bulky, and expensive photonic systems with tiny, mass-producible, and energy-efficient microsystems on a chip.

The group’s website describes silicon as “the optical bench top of the future.” Silicon is the most cost-effective route to addressing the many demands of 21st-century technology — reducing energy consumption, decreasing size, maximizing bandwidth, enhancing connectivity, and improving security.

Over the past year, her supervisors Jonathan Bradley and Andrew Knights collaborated with Miarabbas Kiani on her breakthrough to finetune and prepare the results for publication. “Lasing in a Hybrid Rare-Earth Silicon Microdisk” has now been published online in Laser & Photonics Reviews. Publication in print is expected in an upcoming issue.

A pioneer in the field of silicon photonics, Andrew Knights was until July 2021 the Director of McMaster’s Centre for Emerging Device Technologies (CEDT), a nanofabrication facility where researchers in the Faculties of Engineering and Science explore novel device systems.

“Using the CEDT facilities here at McMaster, Khadijeh has devised an innovative solution to a decades-long problem that could eventually be scaled to volume manufacturing,” says Knights, who is Associate Vice-President, Research, and a professor in the Department of Engineering Physics.

Now that Miarabbas Kiani’s research has produced a single laser on silicon, the next step in the team’s ongoing research will be to create a laser that operates within a silicon photonic circuit.

Curiosity-based research that changes the world

Miarabbas Kiani’s curiosity-based research is reflected in the story of another McMaster student. Donna Strickland received her BEng in Engineering Physics from McMaster in 1981 and went on to doctoral studies at the University of Rochester. Strickland’s work on pulsed lasers with her PhD supervisor Gérard Mourou would lead to their Nobel Prize in Physics in 2018. One application of their research is corrective eye surgery, which has helped millions of patients worldwide.

“Lasers can change the world,” says Miarabbas Kiani. She’s dedicated to pursuing her research because of the many ways in which lasers can help improve the human condition.

She explains that “fabricating a laser on a small integrated chip creates a powerful device” — for example, an ultra-precise surgical cutting edge that could lessen patient pain, better geo-sensing that could decrease accident rates, and stronger satellite networks that could provide high-speed internet to remote communities.

Miarabbas Kiani received her master’s in electrical engineering from Shiraz University in Iran, where she specialized in photonic and optoelectronic devices. Encouraged by her supervisor to expand her academic horizons, she considered studying in the U.S. but was unable to obtain a visa.

Her father suggested she think of Canada. “You have lots of windows open for you,” she recalls him saying. “Remember your goal to help people around the world.” Miarabbas Kiani is grateful for the support of her parents, who encouraged all their children to follow the higher education that they did not have the opportunity to pursue.

The Canadian government granted her a visa and she applied to McMaster, enrolling in January 2018. Currently working on her thesis, she expects to complete her PhD studies this fall.

“I’m honoured to be at McMaster University and to study with Dr. Bradley and Dr. Knights,” says Miarabbas Kiani.