‘Are you sure you don’t have a background in medicine?’ 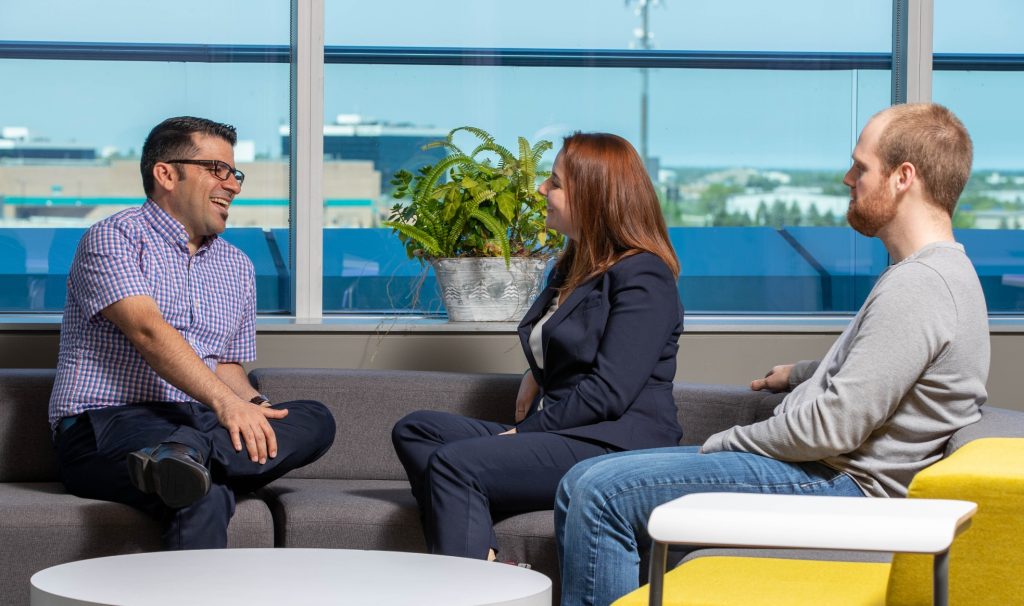 Manaf Zargoush's research is all about answering one of humanity's oldest questions: What does my future hold? (Photo by Georgia Kirkos)

“Are you sure you don’t have a background in medicine?”

Manaf Zargoush gets that a lot.

Zargoush — who does have two doctorates — is working on many things: a solution to part of Canada’s pressing hallway medicine problem, and a tool to predict how and when older adults will experience disability. He’s tracking how seniors’ mobility changes with age, developing a model for tailor-made hypertension treatment and creating a model to predict how physicians think, so they can take their individual behaviour into account when prescribing treatment.

And he’s doing it all with data and math.

An assistant professor of health policy and management in the DeGroote School of Business, Zargoush works with experts from a broad range of disciplines, using complex data analysis to find the answer to a question humans have asked since the dawn of time: What does my future hold?

“Everyone wants to predict the future — in business, politics, relationships, the weather,” he says.

“I’m doing the same thing with health care: Asking if, when, how, and why things are happening to human health. And I’m finding the answers.”

And once you know the answer, you can make better decisions. “If you know it’s going to rain, you take an umbrella,” he says. “That’s my philosophy of tackling problems. And that’s the whole point of my research.”

So if it’s possible to predict that an older adult will experience a loss of mobility in upcoming weeks or months, they can prepare for it — arranging for supports and care, adapting their lifestyle and managing expectations. If a hospital can estimate when a patient will require an alternative level of care, they can arrange it well in advance.

And if they can do that for multiple patients, many of them competing for limited resources, it promises immense benefits for patients and the health-care system.

Given enough warning, it should also be possible to change health outcomes, Zargoush says.

“The data is there, but are we analyzing it properly? Are we learning enough lessons from it? Usually, there are hidden patterns in those data, and if we can get to them, they’re very insightful and sometimes life-changing.”

Data analysis and optimization for health-care management are two of the three things Zargoush says are pivotal to his research. The third is interdisciplinary work. In his current projects — and he has at least half a dozen on the go — he is working with physicians, gerontologists, nurses, scientists, engineers, rehabilitation experts and social scientists.

Here are some of the projects on which he’s using advanced health analytics:

Using data from a massive study of around 300,000 people leading to 1.8 million data records, Zargoush has developed “AgeABILITY,” a mobility forecast tool.

AgeABILITY offers users scenario-based planning to help older adults, physicians and caregivers prevent a progression toward disability, and to promote recovery from existing disabilities, such as mobility loss or inability to dress oneself.

This project focuses predominantly on older adults who come to the hospital, receive treatment, but are then unable to leave. “Maybe they need extra care, and because they’re older adults, they cannot go back home to the life they had before — they need home care or extra care in another facility such as long-term care,” Zargoush explains.

The problem arises when alternative care isn’t ready, and the patient is unwillingly forced to remain in hospital. Now, not only are they using a bed someone else needs, research shows staying in hospital will actually cause a deterioration in their health.

“But we have so much data on these patients. Can’t we find a pattern so we can predict when they’ll need an alternative care?” Zargoush says.

“Imagine if I could call long-term care and ask, ‘Do you have a space in two weeks?’ See how prediction is going to change things?”

Zargoush and his research partners at Michigan State University and McGill are using Machine Learning and optimization to model how physicians make decisions. And based on that understanding, they offer recommendations on how the doctors should prescribe treatment.

“Based on the differences between how various physicians learn about their patients’ underlying health conditions, we are able to chart the subjectivity of their decisions,” he explains. “Now we can tell one physician: If you think this way, then this is how you should prescribe medications.”

Based on this research, they are also able to capture so-called physician inertia and assess the value of improving learning behaviour.

The project, which Zargoush says is some of his best work, had its challenges. “The model we needed didn’t exist — we invented that model.”

Zargoush is working on two projects that chart changes in older adults’ mobility. One is an interdisciplinary project, funded by McMaster Institute for Research on Aging and Age-Well, that tracks subtle components of older adults’ mobility to predict end-stage disability and other health outcomes.  The researchers will use wearable sensors to chart how older adults move, and how their movements change. Zargoush and his colleagues will analyze the data with an eye on ultimately predicting and preventing a loss of mobility.

The other project also uses sensors to track older adults’ mobility, but in hospital. “Here we are focusing on making their discharge from hospital safe, optimal and timely,” Zargoush says.

The intersection of health, data and managerial solutions

Zargoush, who started out as a mechanical engineer, always wanted to have an impact on people’s health and well-being.

“I really wanted to dig deeper into human health and help people, but from a technical perspective, using data, mathematics and optimization,” he says. It let him to two master’s degrees, followed by a PhD in decision science and statistics at ESSEC Business School in Paris.

“Now I understood how people make decisions, and I could describe it and predict what would come next,” he says. “But there was still something missing in my way of looking at things: It was knowing how they should make decisions, what we call normative science.”

So, halfway through his first PhD, Zargoush started his second PhD, this time at McGill, in health-care operations and information management.

“One of the most important things I learned is that if you want to work on helping human beings, you have to transform ugly and complicated data into something that’s easy to understand and engaging to communicate.”

And that’s where interdisciplinary work comes in. Everything Zargoush does is shaped by feedback from his colleagues in other fields.

All the data and analysis in the world can never replace human decision making, he says. “No matter how accurate and complex a machine is, it’s impossible for it to capture the complexity of human behaviour,” he says.

“What I do is combine the information that comes from data that human brains can’t analyze, with the expertise, observations and judgement that only humans possess.”