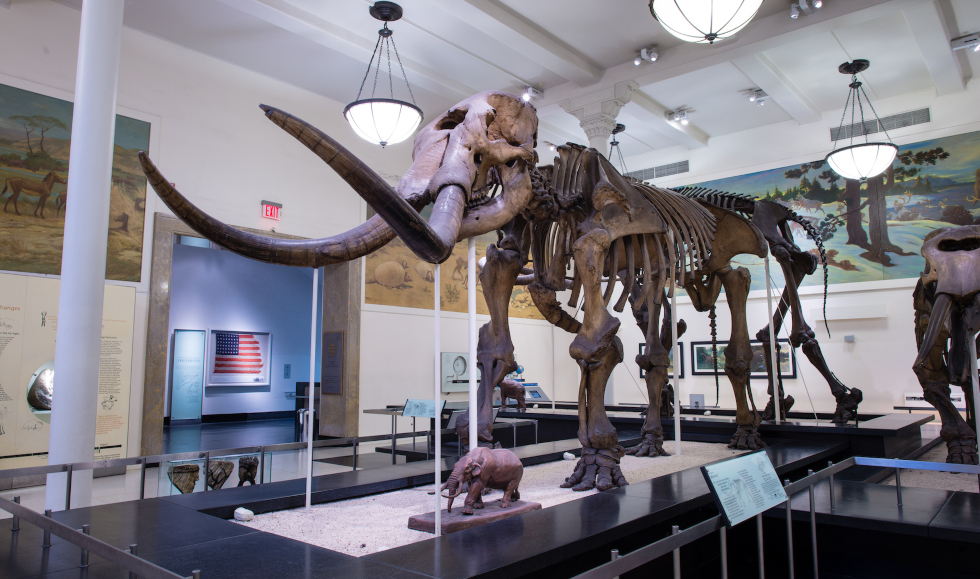 A mastodon skeleton at the American Museum of Natural History

New research from an international team of evolutionary geneticists, bioinformaticians and paleontologists suggests that dramatic environmental changes accompanying the shift or melting of continental glaciers played a key role as American mastodons moved north from their southern ranges.

The species disappeared approximately 11,000 years ago during the megafaunal extinctions that took out many of the large mammals such as mammoths, sabre-toothed cats and giant ground sloths.

The mastodon was among the largest living land animals on Earth at the time, roaming from Beringia (present-day Alaska and the Yukon) east to Nova Scotia and south to Central Mexico. They were primarily browsers, living in swampy settings, eating shrubs and low-hanging tree branches.

“The genetic data show a strong signal of migration, moving back and forth across the continent, driven, what appears to be entirely by climate,” says evolutionary geneticist Hendrik Poinar, director of the McMaster Ancient DNA Centre and author on the study.

“These mastodons were living in Alaska at a time when it was warm, as well as Mexico and parts of Central America. These weren’t stationary populations, the data show there was constant movement back and forth,” he says.

There has been much speculation about what caused their extinction, along with 44 other large mammals, though many scientists believe it was a combination of climate change, increasing competition for food sources and overhunting by early humans.

Dramatic and repeated temperature fluctuations occurred routinely on the planet for millions of years—the most dramatic of which over the last 800, 000 years—resulting  in ice-sheet expansion and retraction and the warming of previously frozen northern regions whose new forests and wetlands provided new food sources for some animals like the mastodon, moose and beaver, but took away grasslands from others like horses, mammoths and bison.

Researchers suggest that by examining how different ecologically adapted Pleistocene megafauna responded genetically and ecologically to such climate transitions can provide valuable information on how climate change is affecting modern-day species in the north.

For the study, the team teased out and reconstructed DNA from fossilized samples including teeth, tusks and bones.

Analysis show that mastodons were moving vast distances in response to warming climate conditions and melting ice sheets, from warmer environments, to the northernmost reaches of Alaska and the Yukon. However, despite these massive increases in territory, northern populations were much less genetically diverse, rendering them more vulnerable to extinction.

“By looking genetically at these animals which lived for the last 800,000 years, we can actually see the make-up of these populations that made it up to the north. It’s really interesting because a lot of species presently, like moose and beaver, are rapidly expanding their range northwards by as much as tens to hundreds of kilometres every century,” says Emil Karpinski, lead author on the study and a graduate student at the Ancient DNA Centre and the Department of Biology at McMaster University.

“Analysis of DNA preserved in these fossil mastodon bones gives us so much more information on how these now-extinct beasts lived and died in comparison to what we know based on traditional paleontological approaches.

“These data hold the key to our understanding of how ancient animal communities like mastodons adapted to changes in the past, and provide clues to how arctic ecosystems will respond to future warming scenarios,” says Dr. Grant Zazula, a coauthor on the study and paleontologist with the Government of Yukon.

The paper was a collaboration between scientists across Canada, the United States, Mexico, and Australia, and made possible with the help of many museums and research institutions that donated specimens for this study.